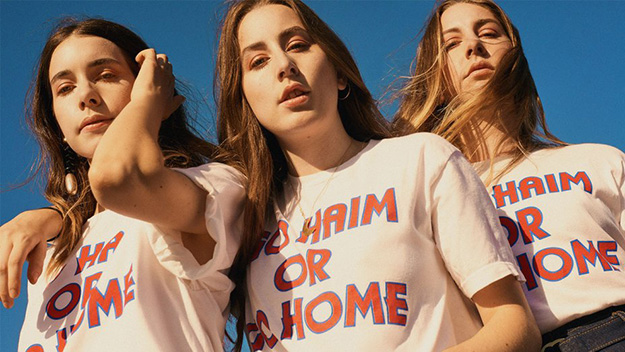 | Top 10 Reasons to love Haim the band. The sister trio that are taking the world by storm, one song at a time. GIRL POWER!

Here are my top 10 reasons to love Haim:

1.Their new merch collection has launched at Urban Outfitters. Excuse me while I fill my shopping basket with ‘Go Haim or Go Home’ t-shirts.

2.Haim’s debut album Forever, featuring the likes of catchy classics Days are Gone and Let Me Go reached the top ten charts all over the world.

3.They are all sisters, and best friends, which you can really feel throughout their music. Positive vibes all round!

4.Once I saw them live in Glasgow, and Alana, one of the Haim sisters, was wearing no knickers for some reason. All was revealed…

5.THE HAIR! Oh, the hair! These gals have locks that Rapunzel would be jealous of.

6.The Haim girls play all their own instruments, which in today’s pop music industry can be a real rarity!

8.Style-wise, Alana, Danielle and Este rock every pavement like it’s a catwalk. On and off stage, Haim rules the laid-back, boho California girl fashion.

9.The band’s sound has been described as "nu-folk-meets-nineties-R&B" and "music that sounds like it was written on a lakeside retreat by Stevie Nicks."

10.Their new album, Something To Tell You, is full of absolute bangers. Watch the video below to listen to one of the top tracks, Want You Back.