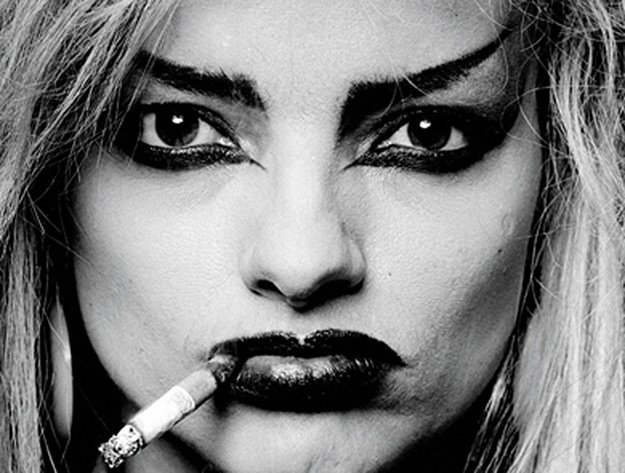 |Fashion Icon, punk legend, the force that is Nina Hagen is a constant sartorial risk taker.

Born in 1955 in what was then East Berlin, Nina actually began her career at a young age, as an actress. Although referred to as the Godmother of Punk, Nina is technically also an opera prodigy which informs her infamously operatic style of singing.

While Nina released some music in East Germany, it wasn’t until she made the move to West Germany that her music career took off. She formed the Nina Hagen band. Although the band was short lived, releasing just two albums, it lead Nina to go solo. But while her music was popular, it was her infamous outfits, makeup, hairstyles and TV show appearances that really made her a star.

Just like her music and her personality, her makeup was intense and in your face. There is no subtlety in the world of the Godmother of Punk. One of the really distinct things about Nina’s makeup was that everything was pulled up. her eyebrows were often shaved at the ends and drawn in upwards. Her eye makeup following at the same angle, and with extreme blusher contouring her cheeks.

Never one to stick with the same looks, her makeup was always changing.

Nina’ hair was Punk before Punk, New Romantic before New Romantic, New Wave before New Wave. Her hair was a magical mass of constantly changing colour and styles. Proving that you don’t have to have one signature style or colour.

Nina’s fashion sense flitted between bright and garish in clashing colours or trashy and flirty. Her style was enticing, if not a little neurotic. Nina’s colour palette of choice ranged from black, and lots of it, to all the colours; fuschia pink, reds and bright greens, yellow and plenty of pastels.

These colourful looks were always feminine, but they did have had a touch of the macabre to them, perhaps influenced by her escaping from the grey communist bloc of East Germany and embracing the bright, over the top look of western consumerism. Or perhaps it was just her punk identity spilling. Regardless, like most innovative and original dressers, Nina’s clothes were not just mere dressing, but rather served as a means to express her character.