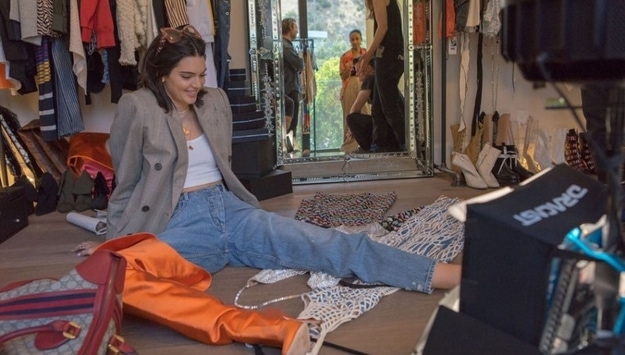 Feminism & Fashion: Are We Leaning In or Selling Out?

| Dubbed Supermodel Closets: Kendall Jenner kicks off the new series that gives you a 360° tour of her wardrobe. Send thanks to Condé Nast, Vogue & Google.

What happens when worlds collide… No I’m not talking science fiction, I’m talking about when America’s biggest fashion magazine and the worlds biggest search engine collaborate the only way 2017 knows how: Virtual Reality. This was when Vogue went technical.

Dubbed Supermodel Closets, the new series takes viewers inside the wardrobes of their favourite big name models. Starting with Kendall Jenner and even featuring some supers (hey Cindy Crawford, girl) the models will share stories and show off their favourite outfits – on a 360 degree rotation, no less!

In the first "episode", Kendall gives us all a tour of both her wardrobe and her fitting room (because there is a difference you know..) Picking out just a few of her favourite items such as boots from Kanye (natch) a new vintage Hermès bag (essentials) and a whole bunch of different outfits she’s worn to industry events, from couture shows to the Met Gala.

Although I find 360 degree viewing a really cool novelty, personally I feel the quality is a bit lack lustre (and quite frankly, annoying to watch on a bus) for the time being. In like 2 weeks they’ll probably find the answer to this, but I’d take a general video than a pixelated Balenciaga boot anyday. Will I still be watching? Of course I will. What about you? Tweet us over at @fashionfixdaily.