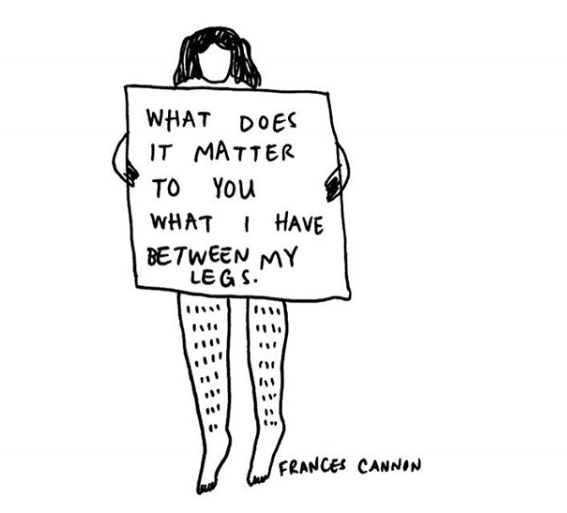 The Avant-Garde Beat: An Alternative to Cut Crease

My memory of sex education in primary school was solely of the TV being wheeled into the classroom, where we watched an oh so 70’s video (even although this was well into the 90’s) showing diagrams of a penis and a vagina and how cis straight penetrative sex was had – in the most basic of forms.

And how that the sole purpose of such was to have a baby. Which was bad, and STI’s would kill you, and you shouldn’t have sex until you’re married. And literally, ‘sex is bad mmm’kay’. The boys were taken off into one room, the girls in another, where we were told about periods and boys were told about wet dreams.

There is SO much I wasn’t taught, that still isn’t taught, about sex, gender and everything in between. So let’s get educated.

Contrary to what you’ve been told since you were in the womb (seriously, can gender reveal parties get in the bin already?), gender is not binary. It is not a case of if you have a penis you are a man and if you have a vagina you’re a woman. In fact, genitals have absolutely nothing to do with gender in any way whatsoever. Gender is about how you identify, how you feel and who you are. And that is much more expansive than being either A or B.

agender : a person with no (or very little) connection to the traditional system of gender, no personal alignment with the concepts of either man or woman, and/or someone who sees themselves as existing without gender. Sometimes called gender neutrois, gender neutral, or genderless.

bigender : a person who fluctuates between traditionally “woman” and “man” gender-based behavior and identities, identifying with both genders.

cisgender : a person whose gender identity and biological sex assigned at birth align (e.g., man and assigned male at birth). A simple way to think about it is if a person is not transgender, they are cisgender. The word cisgender can also be shortened to “cis.”

gender fluid : gender fluid is a gender identity best described as a dynamic mix of boy and girl. A person who is gender fluid may always feel like a mix of the two traditional genders, but may feel more man some days, and more woman other days.

genderqueer : a gender identity label often used by people who do not identify with the binary of man/woman; or as an umbrella term for many gender non-conforming or non-binary identities (e.g., agender, bigender, genderfluid).

intersex : term for a combination of chromosomes, gonads, hormones, internal sex organs, and genitals that differs from the two expected patterns of male or female.

third gender : for a person who does not identify with either man or woman, but identifies with another gender. This gender category is used by societies that recognise three or more genders, both contemporary and historic, and is also a conceptual term meaning different things to different people who use it, as a way to move beyond the gender binary.

transgender : a person who lives as a member of a gender other than that assigned at birth based on anatomical sex.

Definitions taken from A comprehensive list of lgbtq term definitions

Is This The Most Instagrammable Place In London?

Hi, I’m Iona and I go by either she/her or they/them pronouns. Pronouns are really important. Don’t assume someone’s gender and don’t automatically call them she if they look feminine or he if they look masculine. The general consensus is to ask (politely, and appropriately) if you’re unsure which pronouns someone uses.

If someone is not cisgender, don’t ask about their genitals or whether they’ve had/are going to have surgery. Seriously, don’t. It’s none of your fucking business and not relevant to anything. You wouldn’t sit and ask a cisgender person whether they’ve been circumcised or how big their labia is, so don’t ask anyone else about their genitals either.

If you have any other questions on the subject of gender, if there’s a topic you feel you weren’t educated on at school/at home or you just want to say hello – send your emails to relationships@fashionfixdaily.com