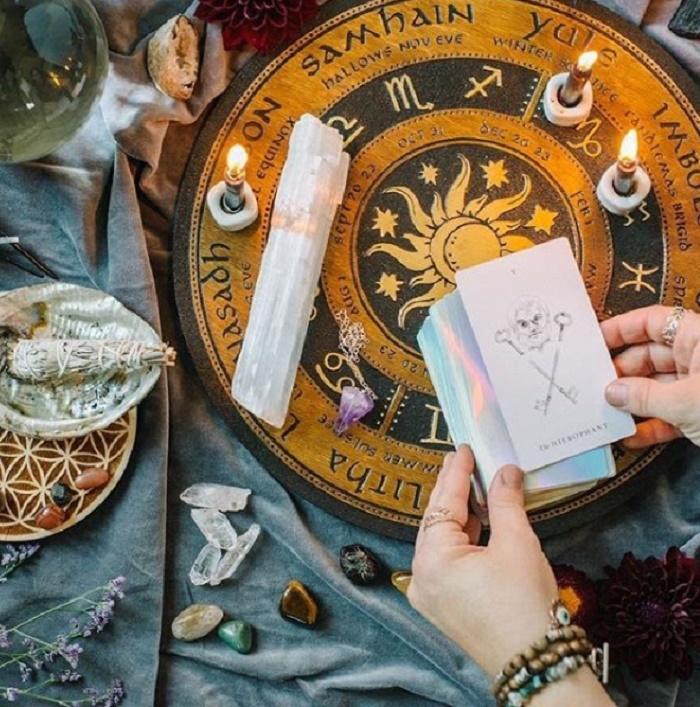 |A quick Google search can find you plenty of healthy living tips, but self-care also includes the mind. Here’s our experience with Tarot.

Some people swear by meditation. Others trade in sun salutations and a stringent yoga routine or gratitude lists.

It’s not that I didn’t try these tried and tested methods of self-care, believe me I did, but when it came to sitting with my own thoughts I found myself getting unbelievably itchy. I was (and am) constantly looking for a way to get to the next task. Self-care became another thing to check off a list and trying to practice mindfulness became the anti-thesis of nurturing a calm sense of self and instead a source of needless frustration.

Witchcraft as a form of mindfulness is experiencing a bit of a resurgence at the moment – be it thanks to instagramable alters, celebrity endorsement of crystals, or astrological memes (who hasn’t at this point felt personally victimized by @notallgeminis at this point? I HAVE BEEN SEEN.

That said, I tend to take the general mysticism with a pinch of salt – and instead when dining at the spiritual buffet taken a build my own approach. Ritual’s became a way to foster routine and structure (something that my black dog benefits from) and mantras became setting of intention. And tarot? Well tarot became a form of meditation. Or more so a form of checking in.

Tarot for me at least isn’t a form of divination, and I think if you’re looking for something to tell you your future then you may as well turn to a magic eight ball for all the accuracy it has as a fortune telling device.

Instead – it’s become a way of reaffirming things that I already know, highlighting the things that I’m stressed about and looking at things in a new light. In short, it’s a way of guided meditation. A clunky and inaccurate description but honestly the easiest way I can make sense of it.

The 72 cards that make up a deck all have different meanings – from the four suits (wands, pentacles, swords and cups) to the Major Arcana that make up key life points. Each card has surface meanings that can be applied to just about anything and their placement in a spread is a way for you to think about how that card applies to the aspect. My go to for both myself and when reading friends is a Celtic cross – a 10 card spread that can give you an overall view of a situation including drives, challenges and hopes and fears.

Whenever reading my own cards of course I’ll have a question that I’m hoping for a bit more perspective on – however often as I lay out the cards I’ll see them apply to other aspects of my life that I may have otherwise neglected. It’s a form of taking the blinders off for a moment and allowing your inner voice to speak up, even if it is for 15 minutes.

Designers and Their Dogs

Learning the cards themselves has been so rewarding. Focusing on one card a day allowed me to explore the different meanings as well as the universal visual language that cross cultures (ie: cups are associated with water and emotions, swords with logic and intellect – think sharpness) and selecting a deck with clear and beautiful imagery was part of that. While I’m still very early on in my journey – focusing on basic spreads and not quite ready to read reverse (cards inverted have different meanings) – by teaching myself tarot through online communities, apps and my own internal monologue I’ve learned so much about myself.

My favorite thing however has been reading my friends cards. Often it feels like a mini therapy session. So often when we check in with people it’s a back and forth, but reading someone’s cards allows for a conversation to be entirely about them. They can tell me as little or as much about what the cards have triggered for them. It’s certainly not a substitute for therapy by any means, but it feels like an act of compassion and human curiosity.

For some it’s a cute parlor trick that trades entirely in narcissism (I mean, who DOESN’T want to hear someone tell them about themselves? Just me?) and for some it’s a reaffirmation of what they already know – whether they are ready to admit it or not.

Tarot isn’t for everyone. Maybe burning sages, cleansing crystals and candles is more your thing. Maybe you make your place of self-care the gym or the airport. But for me a routine, a ritual and some conversation, even if it is with myself, is exactly what I needed to quieten my mind.