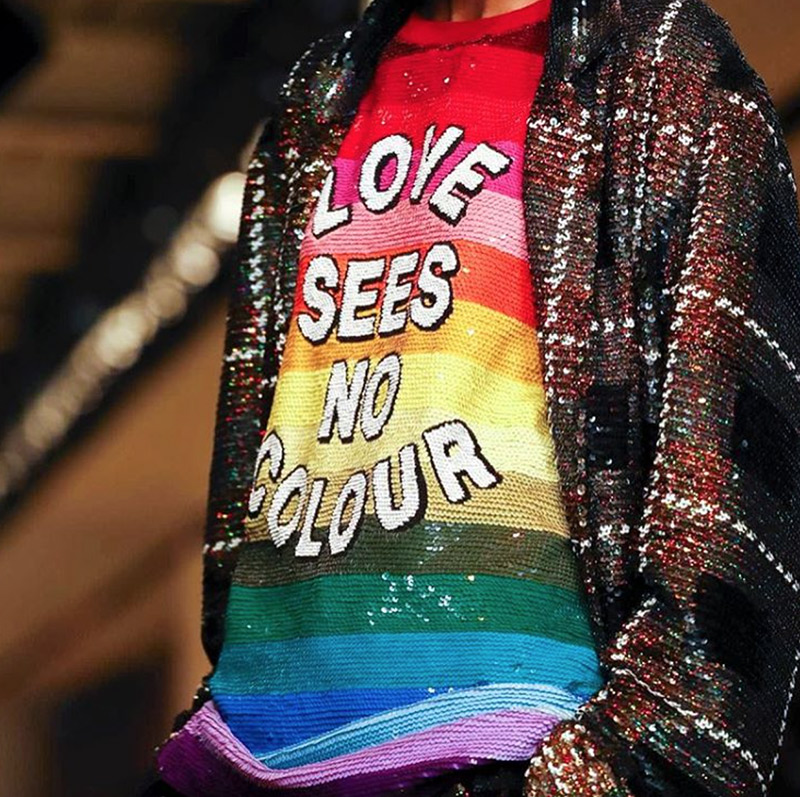 | Statement Fashion, LITERALLY. Ashish blew our mind at London Fashion Week with unfiltered colours and words. Why say it when you can wear it?

Real talk: we need to thank the fashion Gods for Ashish. For SS17 we were sent on a colourful trip to India, or an "unapologetic Indian extravaganza" if you will, and this season was no less emotionally charged or poignant. Officially bringing happiness to LFW right when the journalists, bloggers and models were beginning to fade; Ashish gave us the life we needed.

Giving the biggest middle finger to 2017’s political situation, Ashish took everything that is wrong with the world and covered it glitter. In his ultimate PMA collection, London-based, Delhi-born designer takes us to the most magical place, and this time it was along the Yellow Brick Road.

Getting things started with chords of George Michael’s €œFaith€ before kicking in with €œSomewhere over the Rainbow€ it was then, before the first model even stepped out, that my eyes glazed over. This wasn’t going to be just any other show, this was something way more significant and coupled with his big pink broken heart, the scene was set.

"Pussy grabs back", "Why be blue, when you can be gay?", "More Glitter, Less Twitter" and "As often as possible be gentle and kind" were just some of responses to the current political climate.

The Coolest Jobs in Fashion

With more glitter than you have ever seen in one collection, decked across rainbows and checkerboards, we couldn’t help but notice the strong sports silhouettes taking centre stage & being given the sequins treatment. The collection was a general guide to not being a dick, showing a celebration of togetherness and positivity while referencing our love for all things Americana. With baseball tops, bomber jackets and joggers a plenty, it was hard to not see the aforementioned finger being pointed directly to America. Executed with a wink and a tongue not so firmly in his cheek, it was the now typical Ashish way of showing fashion as so much more than "just clothes".

Ashish as a label brings me nothing but joy and the man himself couldn’t have put it better. "There’s no point in being negative, the only way forward is to be happy," It’s safe to say that here at FFD, we display all the PMA by shining it brightly – though sequins.Thank you, Ashish. Thank you for bringing us all the happiness we have all been craving.