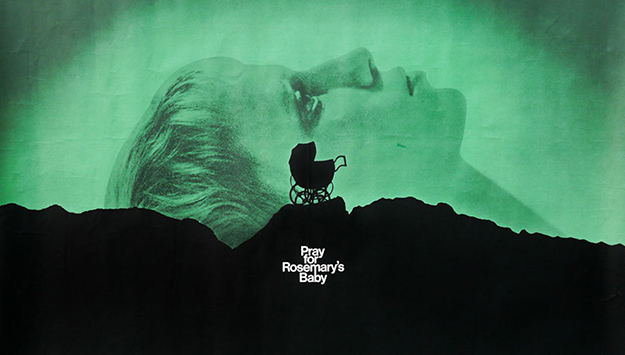 Sometimes overlooked for their more ghastly elements, Horror movies, in my opinion, are some of the most stylish films, so look past the little girl possessed by a demon and check out her mum’s outfit: it’s fierce.

Quite literally one of the most visually stimulating movies of all time, Suspiria, the 1977 Italian horror movie centred around an American student attending a prestigious ballet academy in Germany, things aren’t quite what they seem and the academy turns out to be the home of a murderous coven of witches.

The movie’s set design is harsh with lots of red contrasting the flowing seventies dresses in pale or pastel colours, adding to the horror by constantly subverting our expectations of what we should see in such a movie.

Proving that quality is better than quantity is the Alfred Hitchcock masterpiece The Birds. Interestingly, the main sartorial obsession in the film, Tippi Hedren, only has three costumes and one of them is a nightgown. Even so, Hedren’s iconic mint green suit will go down in history as one of the best ensembles of all time.

While the rest of the cast are stylishly suitable and booted in classic 1960’s wear, it’s the mint suit that really stands out. Created by the infamous costume designer Edith Head, it was made with every detail considered, from the purposeful colour blocking to the simple lines (Head wanted to make sure her designs stood the test of time); even the jewellery was picked by Hitchcock himself.

While the film is definitely very eighties stylistically, there is also what you could say was eighties interpretation of style through time, with Deneuve’s character looks drawing on clothes from as early as the 1930’s – obviously serving to remind you of her immortal status. This film that wasn’t a hit at the time, but has been known to inspire some of the best creatives around the world – in fact Alexander McQueen used it as his main inspiration behind his spring/summer 1996 collection, also called The Hunger.

The inspiration for the style of this cult horror movie classic couldn’t be more surprising, costume designer Anthea Sylbert was told by director Roman Polanski to think Dorris Day movies.

Yeah, so the film happens to be about a young woman pregnant with the spawn of the devil, but that doesn’t mean everyone has to wear black. Like Suspiria the film aims to subvert your expectations by creating an aesthetic contrast; from the infamous pixie cut to cute beret’s, amazing red jumpsuit to the scene-stealing pale blue nightgown, Rosemary’s baby is as stylish as it is terrifying.

Brian De Palma’s classic horror movie is about a teenage girl with powers of telekinesis, but more so than that it serves as a study of teen (particularly female) sexuality. From the girls’ PE uniforms to the 70s hairstyles, Carrie is a visual delight, but no scenes stand out more so than in the infamous prom scene. The original film has a slightly pinkish tone, creating a colour palette that rivals any Wes Anderson, and the hanging stars and sparkly decorations in the prom serving as the perfect backdrop to the iconic prom ensembles.

From her prom date, Tommy’s ruffled powder blue tux, to of course the most infamous look in Carrie, her prom dress. Her dress was simple and understated all the better to be covered in blood in the film’s most well-known scene, but my personal favourite comment on the dress was by the best character in the film, Carries’s mother; the intense Margret White. When seeing her daughter for the first time in her dress, she comments that she can see her €œdirty pillows€, referring to her breasts: iconic.

It’s easy to understand why the style of The Exorcist gets overlooked, as the controversial film even had people fainting at its screenings when it was released in 1973. And to be honest, its controversial infamy never really went away; unlike other horror films, there is just something about The Exorcist. Look past that though and you will see a really stylish film, mainly from the part of the mother of the possessed child, fictional famous actress Chris MacNeil.

Perfectly chic and effortless MacNeil lives up to her actress name with some really fierce ensembles, my personal favourite being in the infamous party scene where she is wearing metallic ice blue pussycat bow blouse and matching satin skirt. It was all very seventies, very classic, all about big collars, muted colour palettes and head scarfs. Oh, and also check out her coat with the massive fur stole during her daughter’s first exorcism, proving that just because there is drama, that doesn’t mean you can’t look stylish.