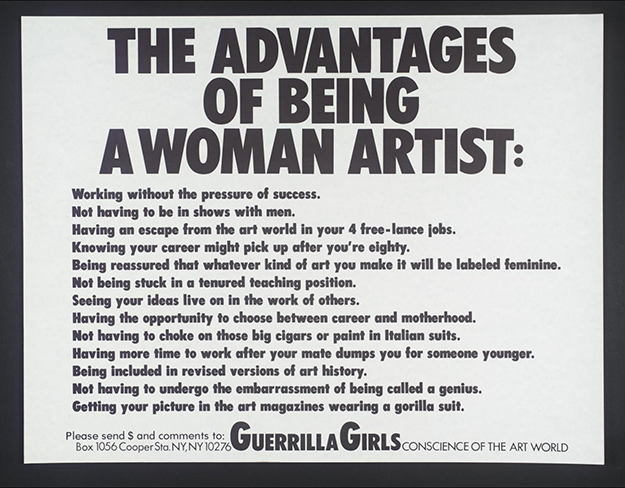 Formed in 1985, the Guerrilla Girls are an anonymous activist group who highlight discrimination in the art world. Their targets include artists, gallerists, and cultural institutions.

Over the years their attacks on sexism have widened to other areas of social, racial and gender-based inequality. These posters were fly-posted overnight in the fashionable New York art district of SoHo. The Guerrilla Girls wear gorilla masks for public appearances and use pseudonyms. They continue to produce publicity exposing discrimination, as well as conducting seminars and workshops in schools, colleges, and art institutions. 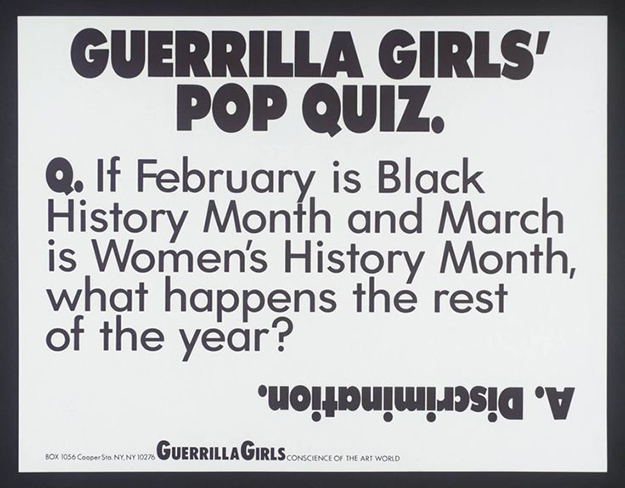 Decades on, their ironic ‘The Advantages of Being a Female Artist’ print is still just as relevant as ever. The Tate in London aims to change perceptions of female artists, increasing representation until equality is reached, with at present over 100 female artists on display. The huge popularity of the Guerilla Girls’ art, currently exhibiting at Tate, is a testament to its profound resonance with women of today, and the need for further change.

Read more How to Paint like Yayoi Kasuma – MoMA

In this candid and joyful video, filmmaker Jenn Nkiru showcases some of the female artists on display in the Tate Collection to celebrate International Women’s Day in her short film featuring Zinzi Minott.