When you talk about a beautiful horror host dressed in a sultry form-fitting black dress, surely the first person that comes to mind is the absolutely iconic Elvira; and while Elvira is one of my all-time favorite cult icons EVER, another one is almost forgotten: the original horror host, Vampira.

Vampira, whose real name was Maila Nurmi, had a pretty cliché origin story – moved to LA with dreams of becoming an actress, things don’t go so well, so she was forced to adapt. By chance, her adaptation would be spurred on by the most chance of meetings with a TV producer at a costume party.

Nurmi, or Vampira as she would become, created a costume to attend based on Morticia Addams from the cartoons of Charles Addams at the New Yorker. And if you’re wondering – yes, that Morticia, but this is long before the Addams Family TV shows or 90s movies. The producer loved the look, but was unwilling to pay for the rights to the character of Morticia, so tasked Nurmi with creating something original, and so Vampira was born.

Vampira would be a celebrity figure and a horror host, the actual first of its kind. Often presenting low-grade horror movies to the viewers, this was a horror spectacle. This original variety show concept was simple: a themed host would present and introduce features to the viewers with bucket loads of camp horror fun. Each show would begin with a rigid Vampira making her way through the fog filled studio, where she would let out a blood-curdling scream, exclaiming "screaming relaxes me", then take up her position on her Victorian sofa ready to present the film.

Adding in plenty of double-entendres – many about necrophilia – she would talk to apparent ghosts or her pet spider, and drink a cocktail at her poison bar. This camp horror fun became a massive hit.

Her success however didn’t last long, and like so many in Hollywood before and after, Vampira’s star faded. But the legacy of the character would go on to inspire TV characters like Morticia Addams and Lily Munster a decade later, and most significantly Elvira, over two decades later.

Interesting enough, Vampira actually tried to sue Elvira, which – like most things at the end of her life – didn’t work out for her. And that is in part the appeal of Vampira. Obviously, her wraithlike look is jaw-dropping, but it’s her mystique that adds to the allure. Her very short lived time in the sunlight (well€¦ moonlight) didn’t last long and, unlike the business savvy Elvira, she didn’t jump on the merchandise train to make that paper. Fading into obscurity, she died in 2008, but the character of Vampira will live on and is sure to inspire many a gothic femme fatale.

Read More The Avant-Garde Beat: An Alternative to Cut Crease

Vampira was most well known for her iconic black dress. The dress, although pretty simple, was dramatic. Less of an Elvira neckline, Vampira’s plunged low over the cleavage but also spread over her shoulders, exposing her collar bones. 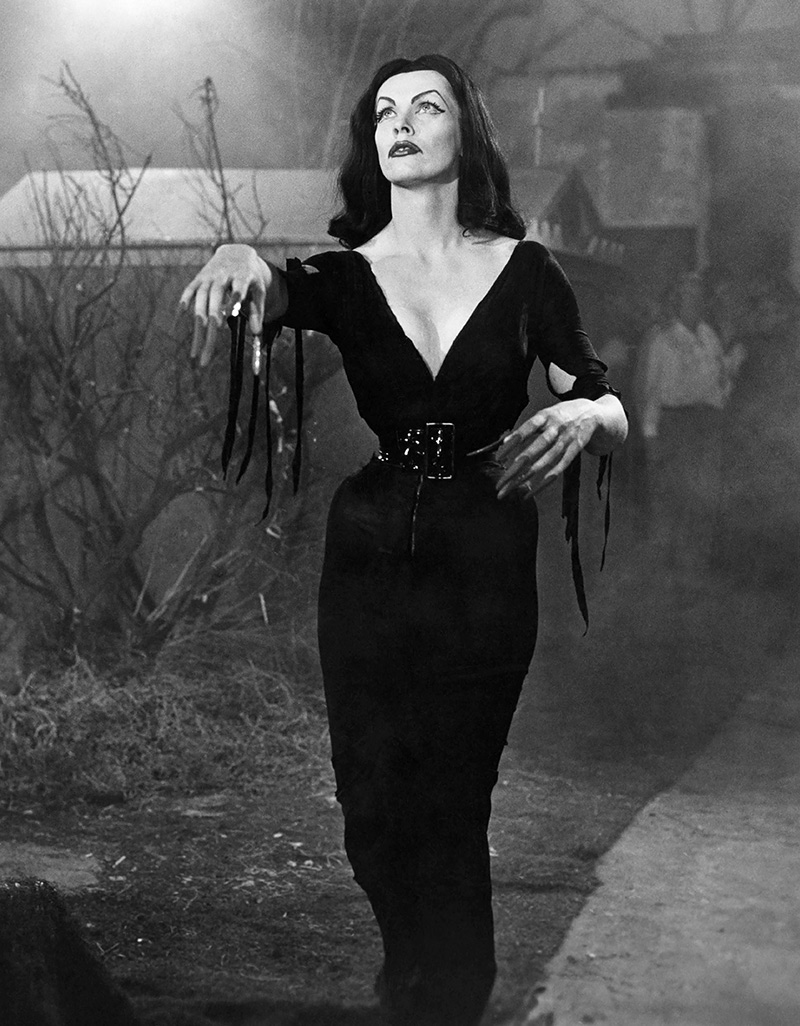 Hitting the floor, it had a massive side split exposing one of her legs – think Angelina at the Oscars in 2012. The ends of her mid length sleeves were slashed, giving them that stylistically tattered look so infamous in those ghoulish Mortica, ‘sexy witch’ dresses.

The look was given an added element of sexiness with fishnets tights and a patent leather belt to emphasise just how tiny her crazy cinched waist was. Light on accessories, it was the simplistic silhouette and colour palette that really made it so effective. Apart from the belt, the only other accessory she ever really rocked was a super long cigarette holder.

Hugely enhanced by her ridiculous bone structure, her hair, makeup and nails aimed to accentuate her already extreme features, and of course add a little proto-Goth Queen realness. 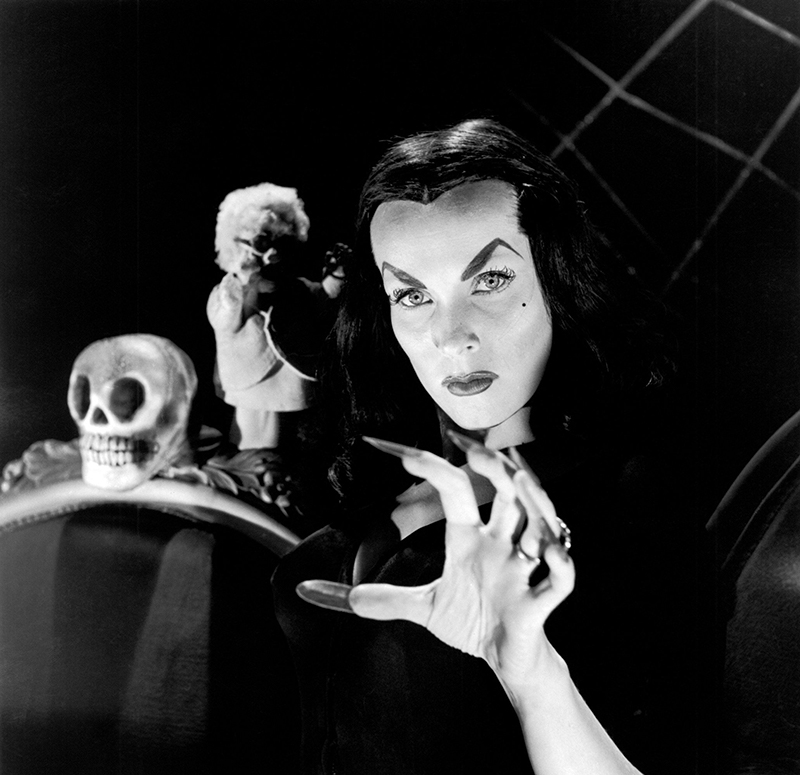 She had pale white skin which was so perfect and flawless that it did indeed seem not human, but the secret was that Vampira was one of the very early users of heavy body makeup, making her complexion look even more flawless. Her cheekbones were cut so sharp they could slice your hand open, with smoky, sultry cat eyes with big lashes, but the stars of the show were really Vampira’s eyebrows, which had an extreme arch and were pulled so high they were practically on her forehead – seriously, this woman was snatched.

Like any drag queen will tell you, there is nothing that will add extra drama and intensity like super high, arched eyebrows. Finishing off her look were bright red lips and super long, claw-like red nails – well, to be specific, her signature red, appropriately named ‘haemorrhage red’.

One of the most instantly noticeable things about Vampira was her waist. Reported to have measured an almost unbelievable 17 inches, her waist was cinched to within an inch of her life. 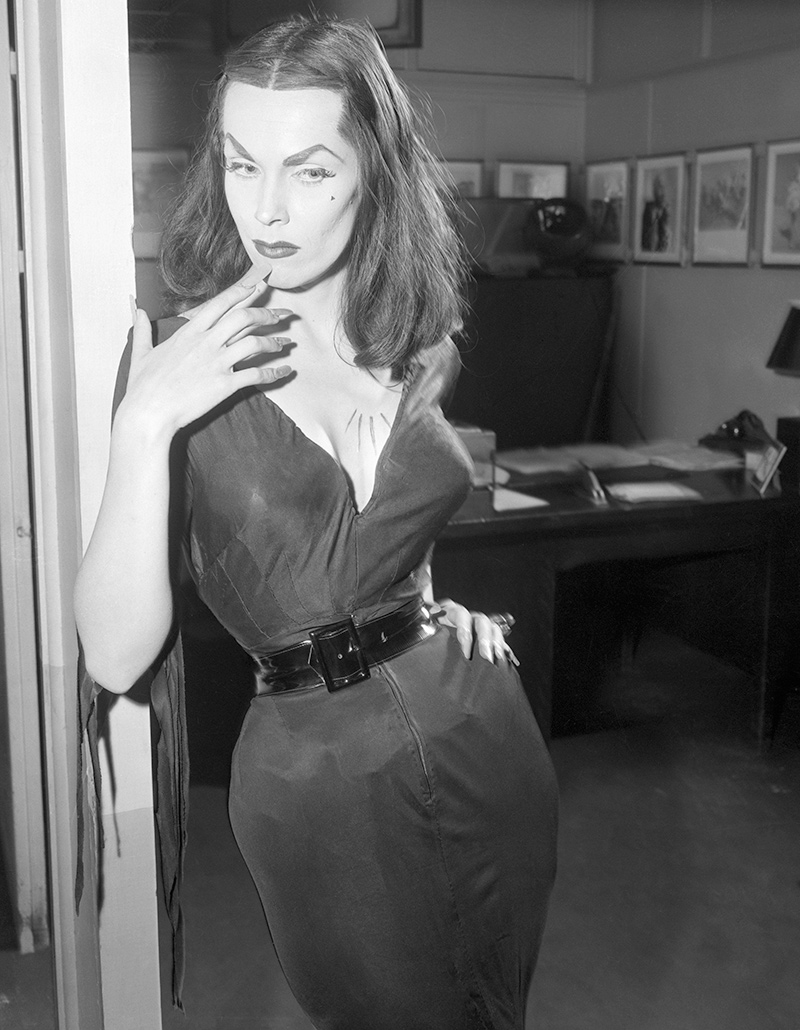