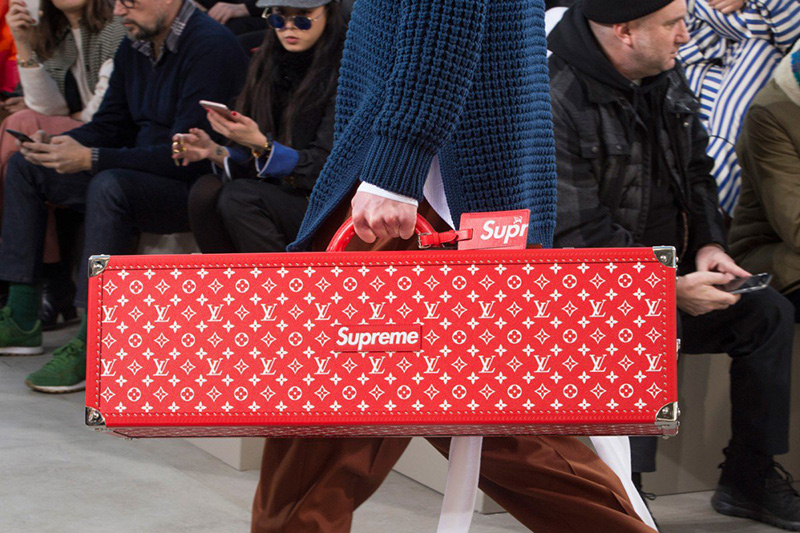 When I was a kid, I used to think the height of cool was a bandana top and some butterfly clips. Although I would still ROCK that look, the meaning has definitely changed with age and developments in the fashion world.

One thing that never seems to get old is designer brands being coveted by everyone from the elite in their members’ clubs to the sk8r bois on the corner. But not all brands are created equal in the cool stakes.

Take Supreme. They are (or were) streetwear personified: Big logo, baggy cuts, clean prints – Done. Whether you agree with their authenticity or not, they use Morrissey in their marketing and are worn by Tyler, The Creator and Frank Ocean. That’s levels of swag from gladioli-holding-indie-boys to rap visionaries – a rare feat.

Then take Louis Vuitton: Gaudy, often copied, and worn by tourists at Piccadilly Circus. Don’t get me wrong, I’m a tacky bitch at the best of times, but I’ve always thought of LV as a new money status symbol even when worn ironically.

Upon learning that Supreme were teaming up for a collab with Louis Vuitton I had to do a little “wuuut”. It’s off-brand for both parties, and stinks a little bit like desperation for high-end status on one side and credibility with the younger generation on the other.

The whole point of streetwear is affordability, and while Supreme, and brands like Palace and Anti Social Social Club are aspirationally priced (read, not Primark, but not out of reach) specifically so young people can actually purchase and wear it. In this collection, it’s been leaked that prices start at $290 – that’s for a bag charm – and go up to $4,350 for a backpack. If the strategy was to get Ciroc bottle buying arseholes to wear your stuff, that’s definitely a winner. But they’re not the real life influencers Supreme needs if they want to stay relevant. Skepta used to wear LV but put it all in the bin because that’s not "me" [him], and if you catch some guy up at the skate park sporting a Penny board and a Louis/Supreme cashmere scarf there will be calls for him to get in the bin as well.

Previous collabs from Supreme have had a bit more substance, such as their dad-tastic Timberland and Clarks partnerships. It felt a bit Dalston, and I could see those desert boots on a visual artist smoking roll ups at a warehouse squat. Christ, even the Duralex glasses they sell are quite a laugh somehow.

Maybe I’m missing something and it’s actually a self-aware meme/parody, but LV is just one step too far. On the upside, it’ll help me weed out the people on Tinder or at a rave who I never, ever want to meet. But it still makes me sad that they’ve dropped over a grand on a fugly denim jacket with a label on it.

Excuse the cynicism, however, because there are streetwear brands who get it right. I’m a big fan of Midnight Studios, who merge punk and gothic influences with the skater aesthetic, and have the confidence to play with shapes – which is an uncommon thing with menswear designers. I feel like if I’m paying $300 for a top, I’d at least want something badass that makes others jealous of me – and jealous because they want to jack my sweet style, not because they think my dad might own a questionable yet profitable company in Hong Kong.

The basic marker of success for something like this will be whether it does actually make it onto the backs of the fashionable boys and girls in the hottest places in town. Honestly, though, I give it a week before it ilicits side-eyes and whispered “look at that knobhead” sentiments. Also, if Justin Bieber wears it, we can all agree it’s fully dead.
The collection arrives on July 17th from selected Louis Vuitton stores, as well as a few pop-up locations. Start saving now to get laughed at at skate parks.