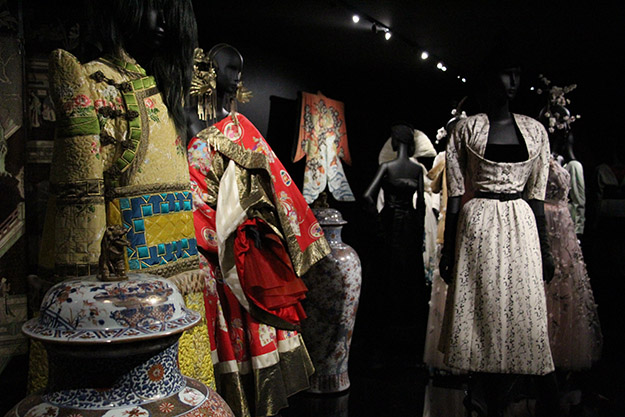 Designing for Disability: How can fashion adapt?

| This year’s must-see fashion exhibition, celebrating Dior’s 70th anniversary. Get your Dior perfume out and bathe in it ‘dahhling’.

Christian Dior: Couturier du RÃªve is moving into its final month at the Musée des Arts Décoratifs in Paris. Here, take a virtual tour around the key highlights of this retrospective exhbition and celebrate the fashion house’s 70th anniversary by exploring the infamous archives of over 1,500 garments and accessories along with illustrations, samples, films and photographs.

Read More How to Spend Christmas in Paris 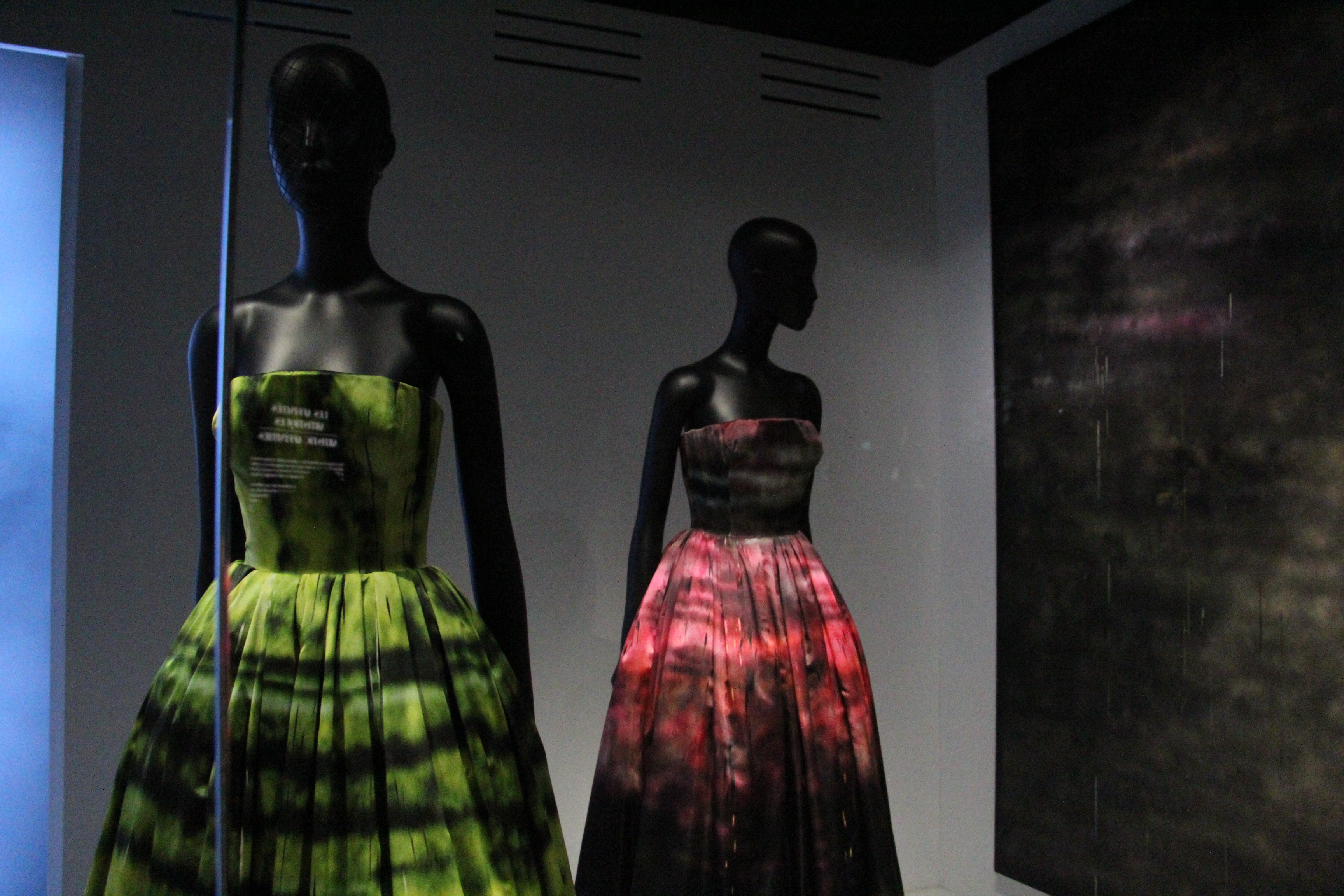 Before Maria Grazia Chiuri- Dior’s first female lead- Raf Simons stood at the helm of Dior for a short time, but what an amazing time it was. From his collaborations with artists to his futuristic textile designs, Raf created a new and innovative vibe for the house, while still staying true to its famous DNA, with feminine silhouettes and celebrations of florals. 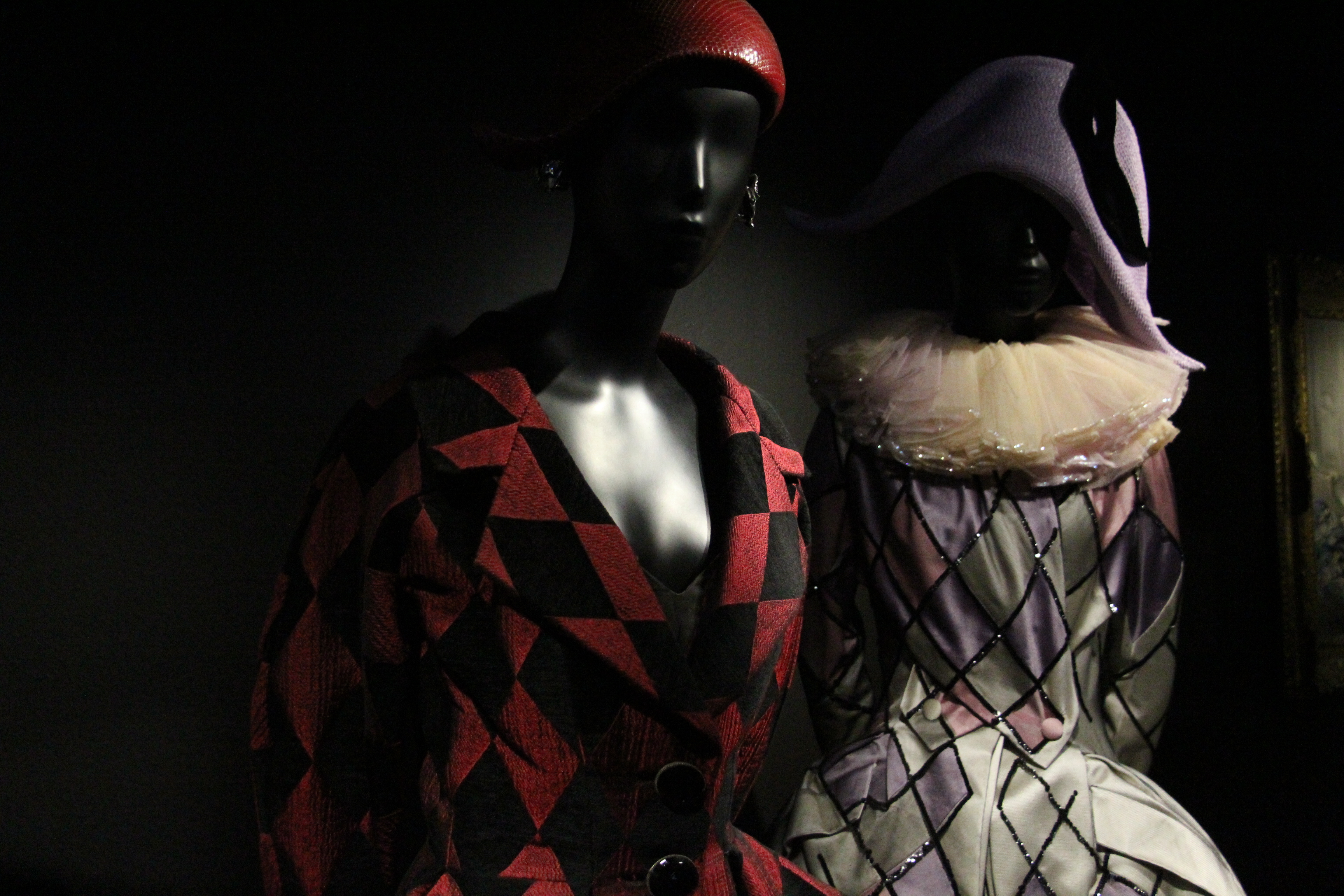 Another great creative director was of course the legendary John Galliano. He pushed the boundaries of what it meant to be a Dior woman, creating suiting from newspapers and taking inspiration out of everything from courtroom jesters to ancient Egyptian goddesses. The controversial but undoubtedly talented designer brought haute couture to brand new heights, and the exhibition explores his work for the brand extensively. 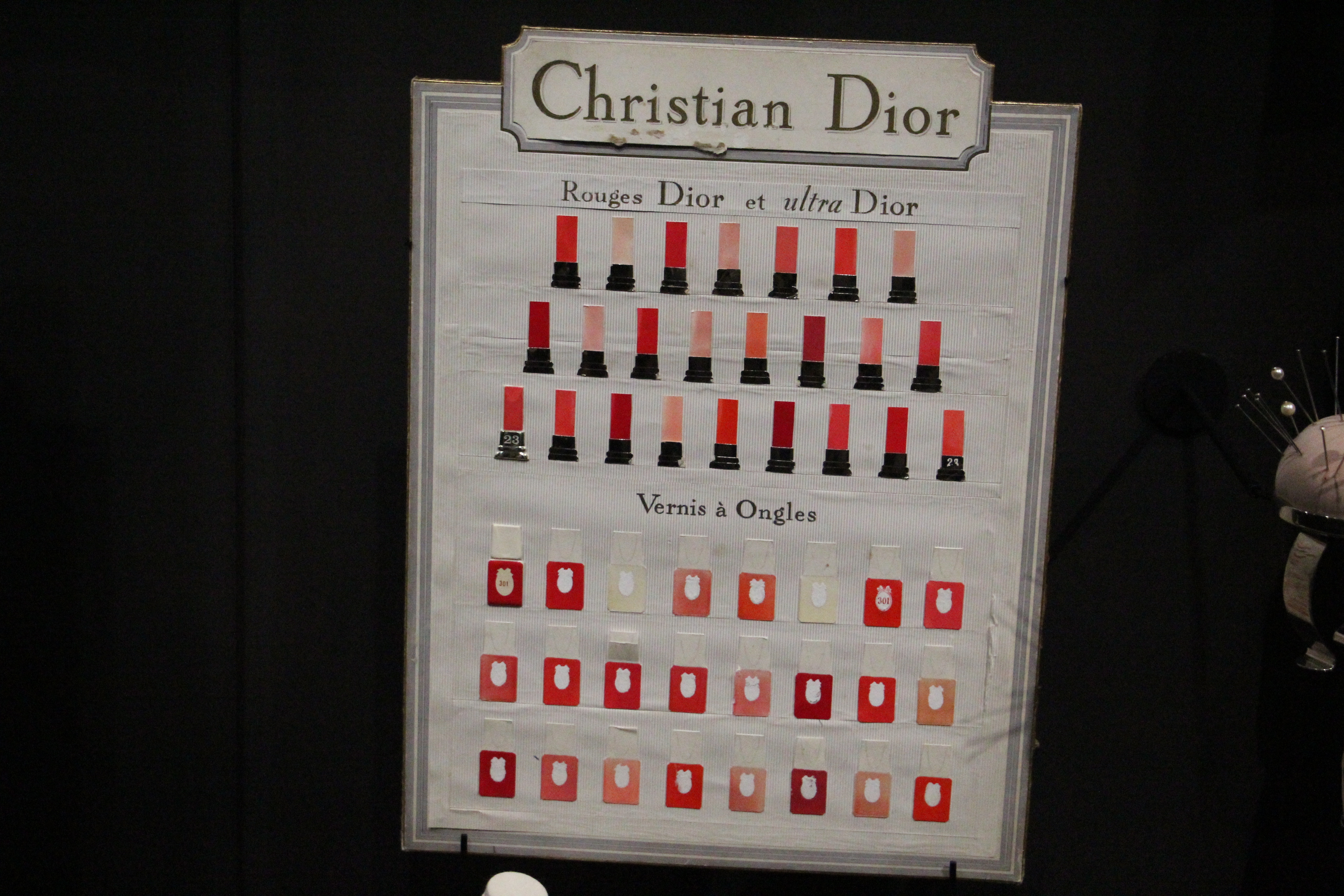 A key highlight of the retrospective was the way in which it went far beyond exploring just clothing, incorporating Dior’s whole universe into the mix, which of course included a rich history of innovation in cosmetics and perfumery. It is a visual treat and it’s fascinating to discover the origins of what is now the norm for high fashion brands to make most of their income from make-up and fragrance. 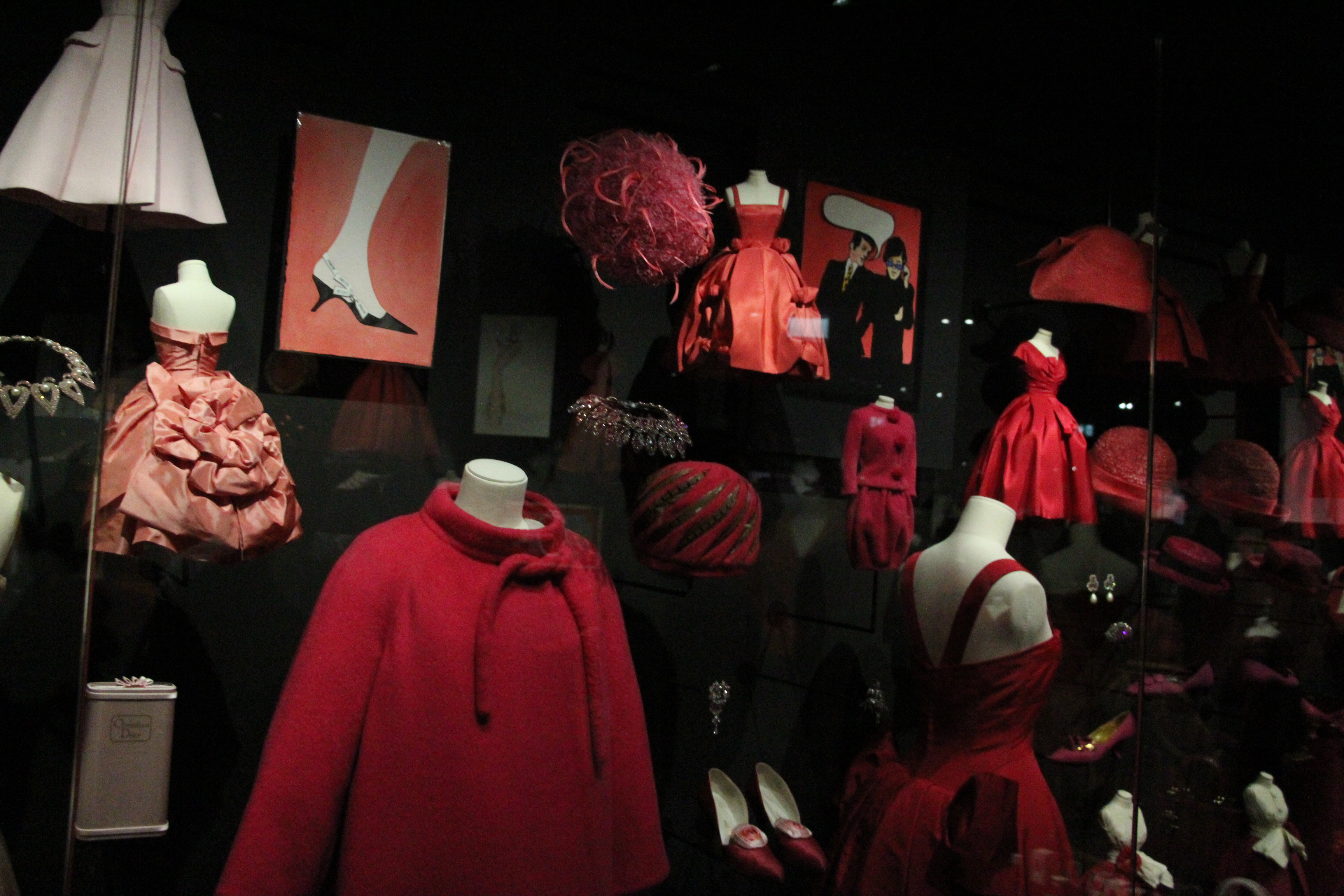 The colour coded archives are the most enticing part of the show for sure; a winding path takes you through every shade of the colour spectrum, with displays curating garments, shoes, bags and accessories from every decade together as one cohesive look, whether its shocking pink, jet black, royal blue or sunshine yellow, as well as original samples and fashion illustrations too. 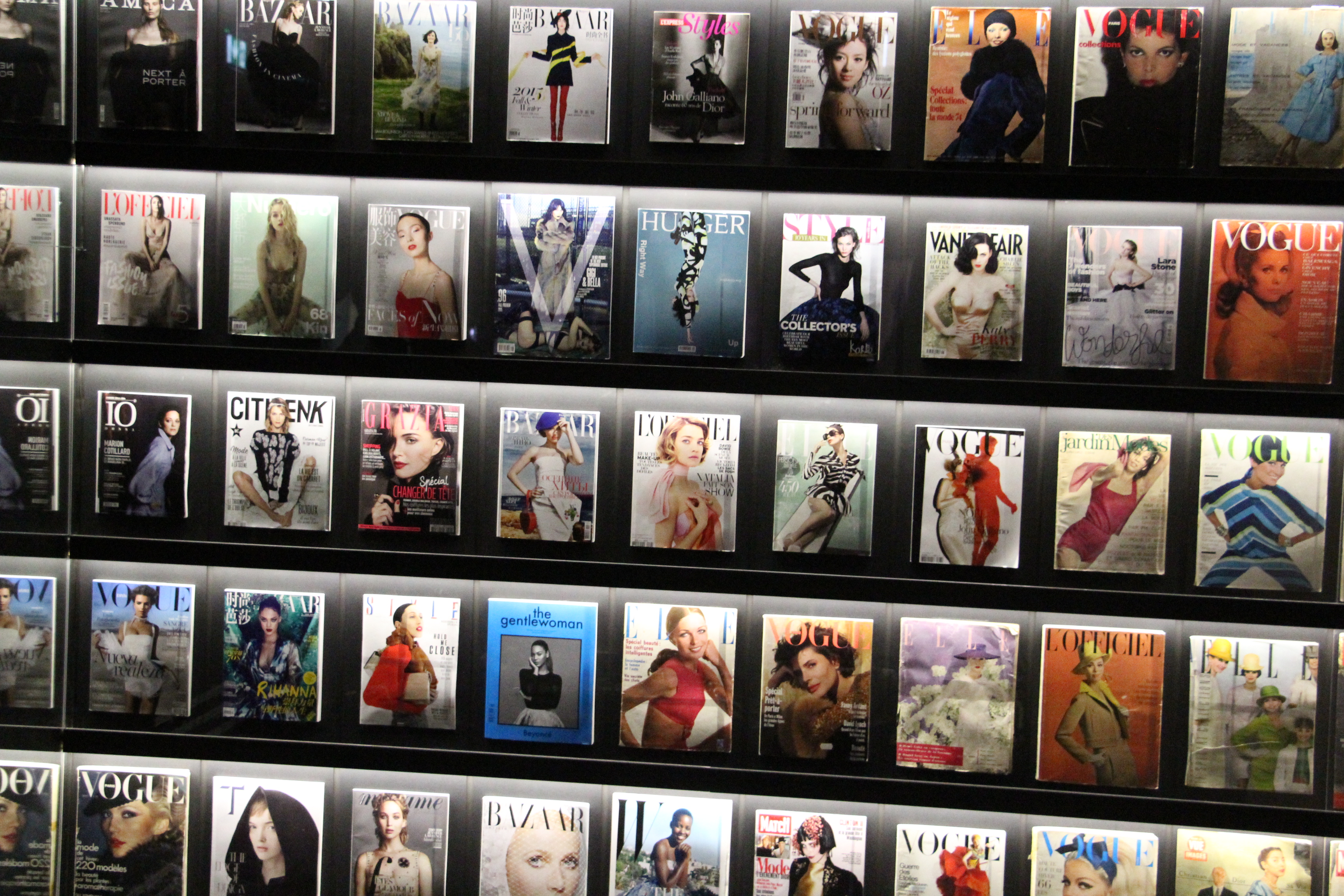 The wall of magazine covers is a fabulous find; it shows every issue of a fashion glossy featuring a Dior look on its cover, mainly in Vogue of course. 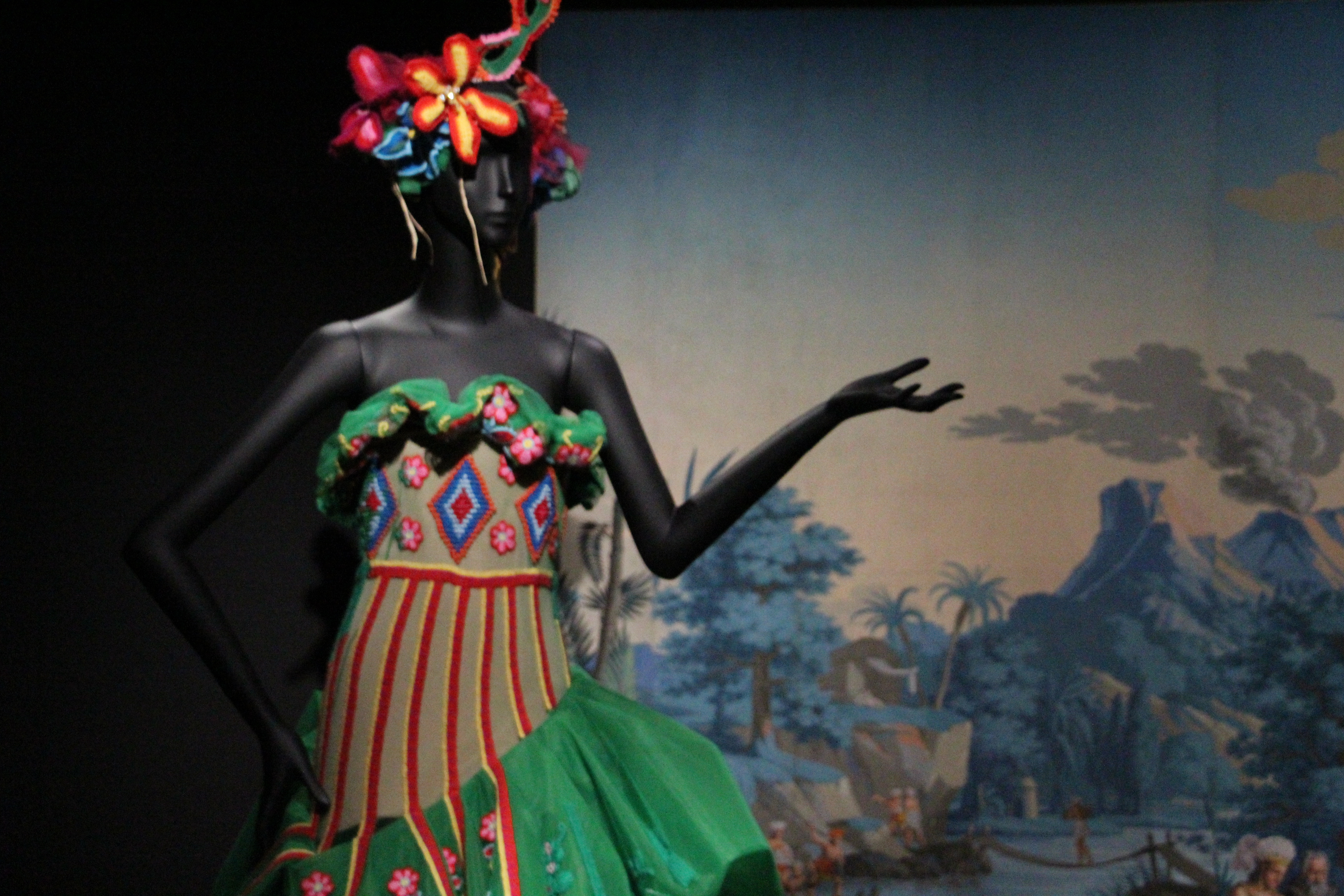 The room analysing the various international inspirations of each Dior creative director was fascinating, displaying items both historic and modern that draw influence from traditional costume, art and culture from around the globe, like Japanese paintings, Chinese dynasty porcelain, ancient Greek dress and African print and patterns. 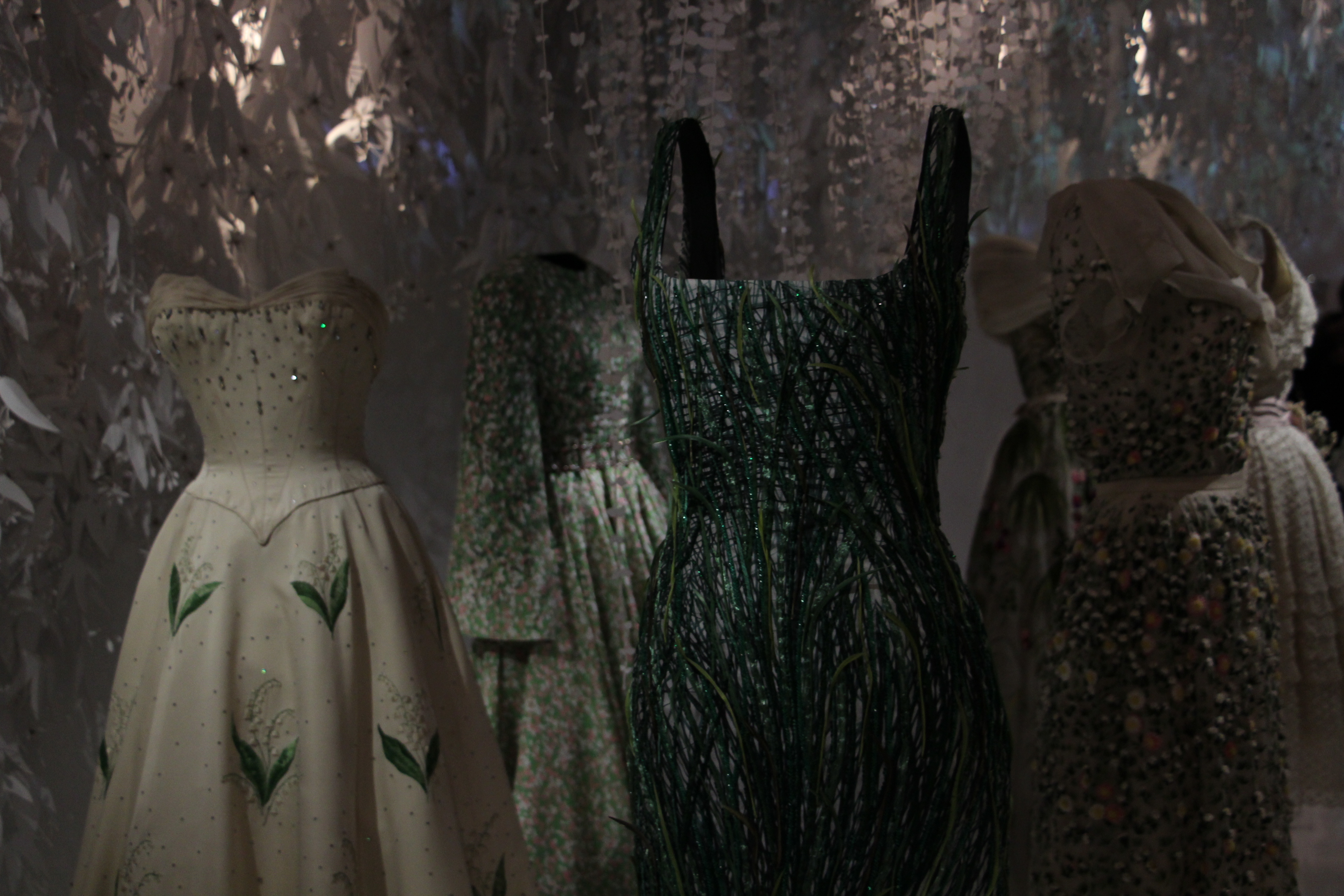 Any Dior fan knows that Christian was the king of florals, and his house continues to enforce the trend every season, whether it’s Raf Simon’s 3D flower walls on the catwalk or Maria Grazia’s intricate embroidered fairytale floral gowns. The floral room of the exhibition is adorned with a breathtaking papercut forest; the perfect backdrop for nearly a century of design inspired by nature. 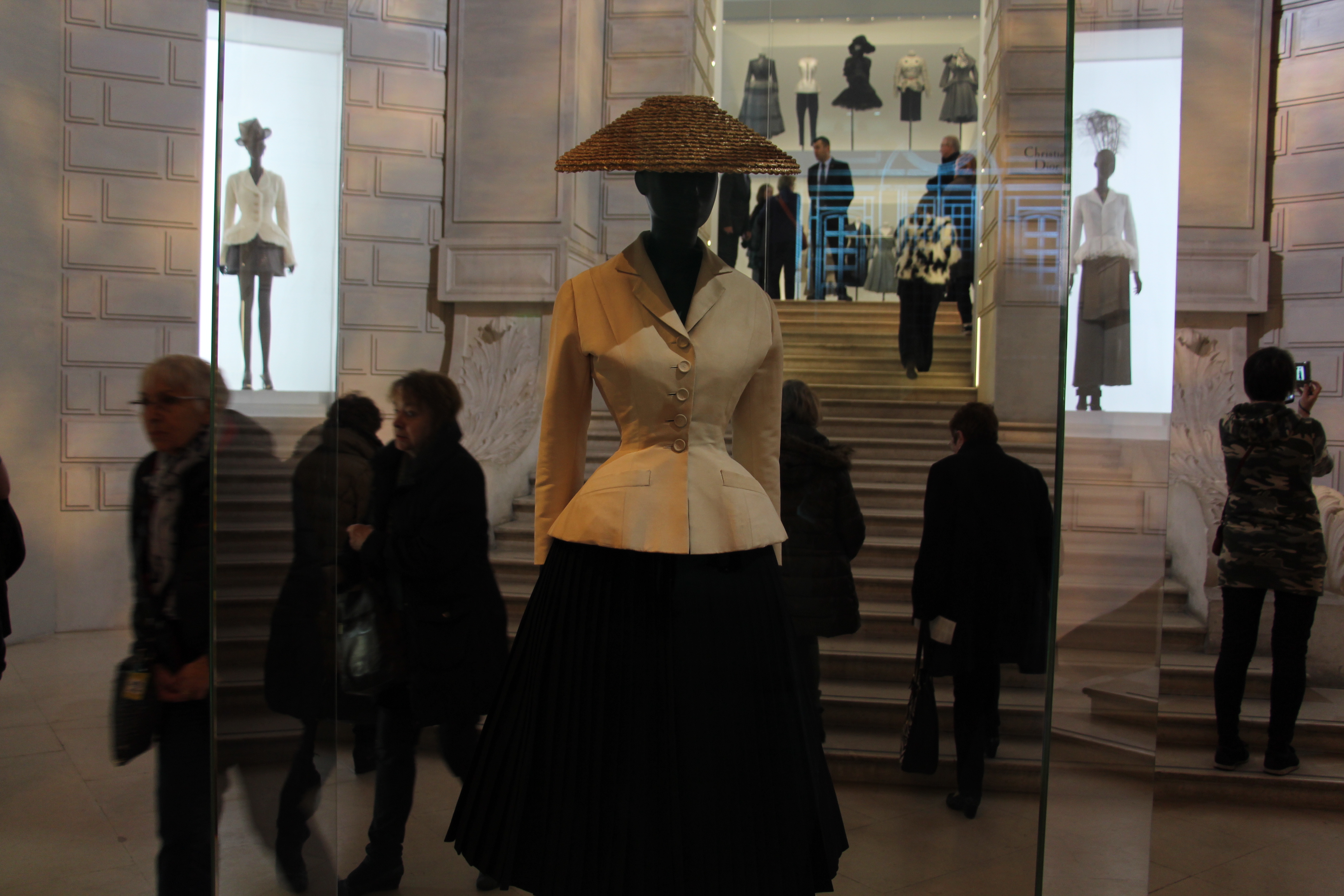 Smack bang in the middle of the building proudly sits The Tailleur Bar. This famous outfit is renowned for creating The New Look in 1947, a brand new silhouette for women’s fashion that reigned supreme for over a decade, and continues to influence contemporary designers today, as shown on the huge wall of modern looks from the likes of Yohji Yamamoto and Alexander McQueen. 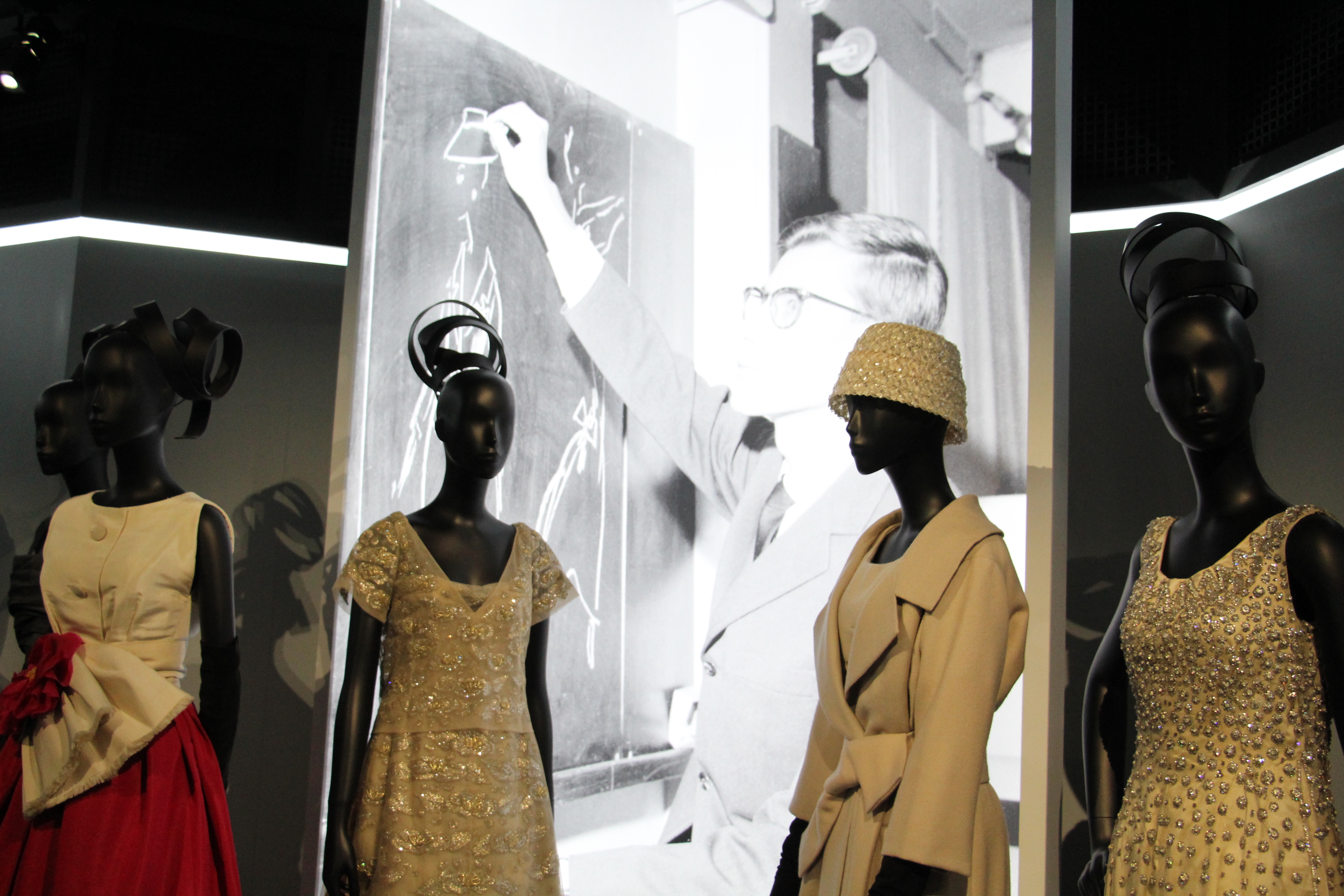 Another favourite amongst Dior’s revolving door of creative directors was a legendary name himself, Yves Saint Laurent, the young prodigy who took over the designing of the collections from 1958 to 1960, taking over at the tender age of 18. His work inspired millions, and is given sufficient pride of place in the fantastic wall of fame that is this titanic Christian Dior exhibition. 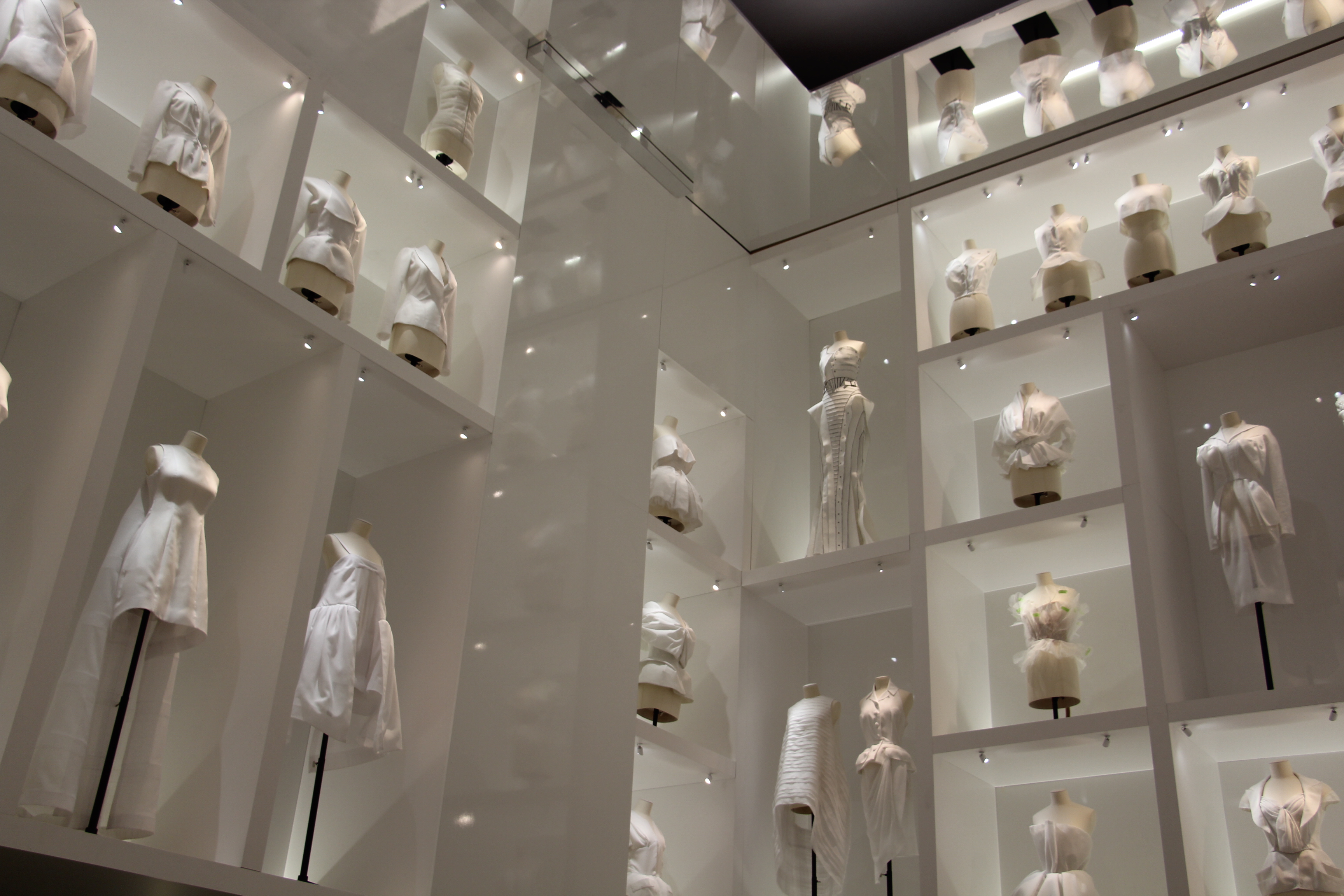 Probably the most popular of the many rooms to explore is the huge expanse of toiles. These dozens of paper or muslin prototypes show the process between every key piece the couture maison has produced, allowing us to see how everything from boxy handbags to fantastical gowns are constructed form start to finish. 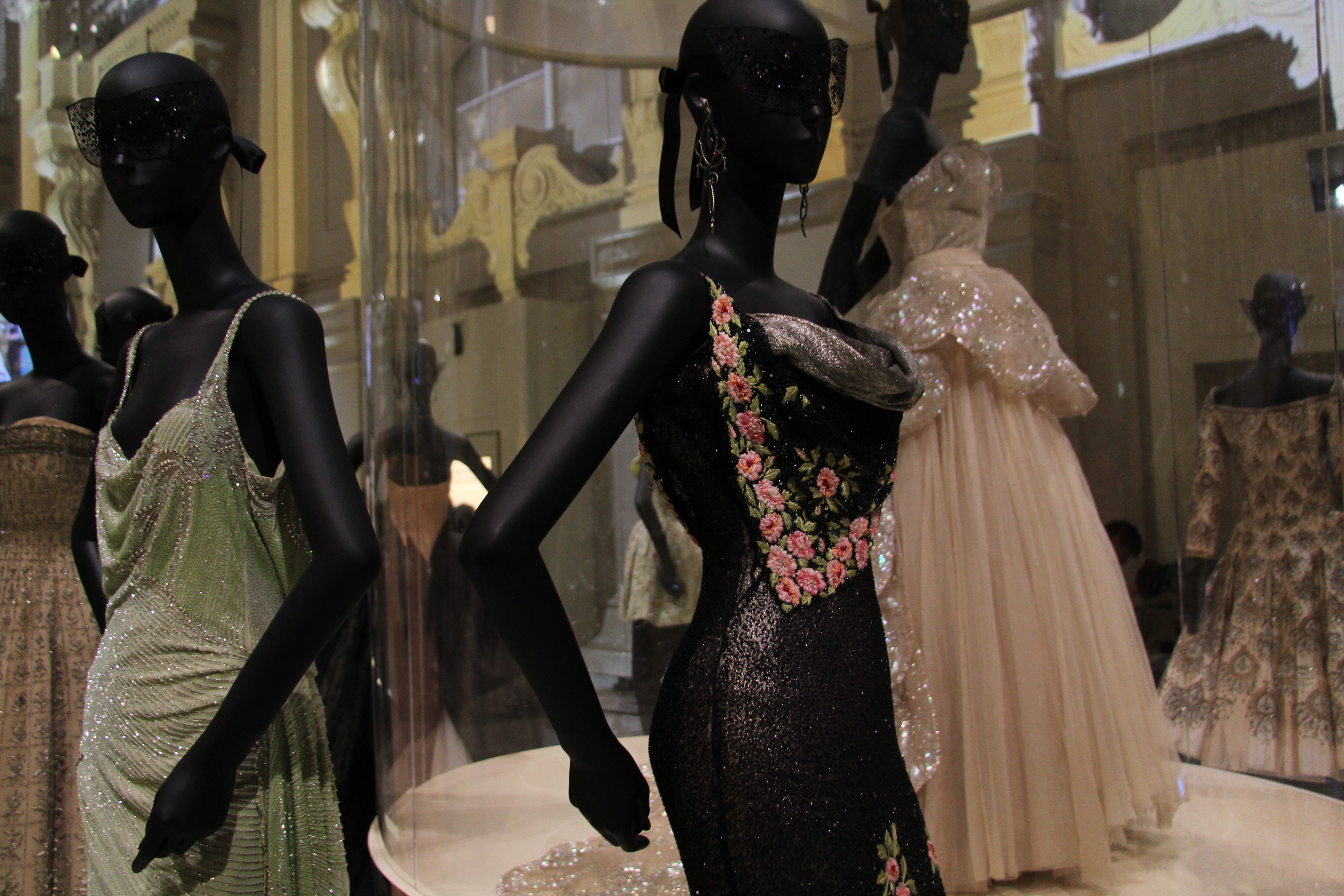 Finally, we have the grand ball. The last room in this very fashionable treasure hunt adventure is a breathtaking ballroom filled with mannequins dressed in the label’s most beautiful gowns, celebrating the never-ending expanse of celebrities and royalty that wore couture dress by the legendary Monsieur Dior to glamourous events around the world.