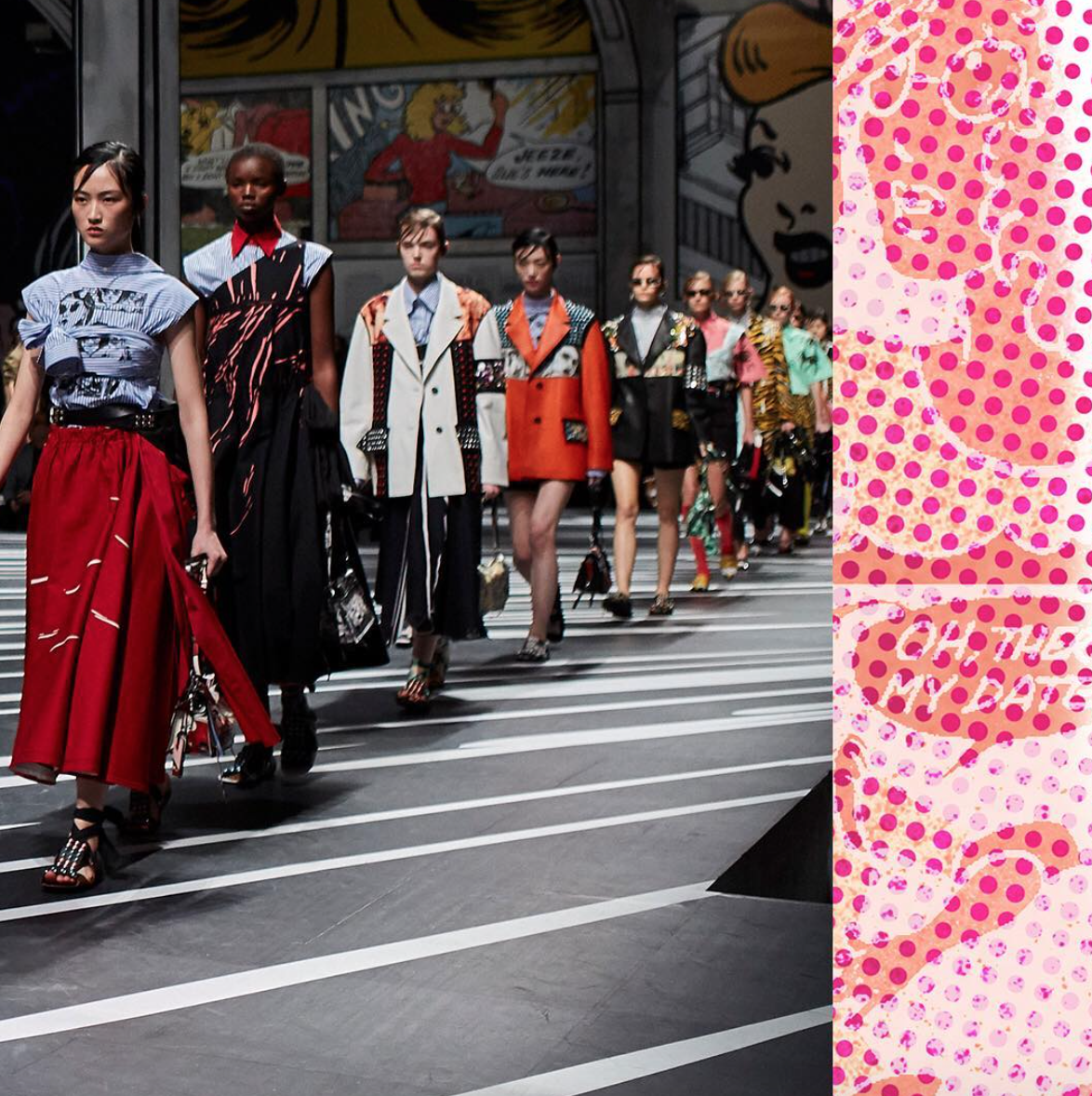 | Prada Spring/Summer 2018 at MFW was "a white canvas filled with ideas", inspired by cartoons from pop art to manga. Miuccia Prada celebrates the strong, powerful woman.

As Milan Fashion Week gets underway, Prada had us wondering what was in store for SS18 with some anime-feel teasers. Miuccia Prada always brings the most anticipated shows of fashion month thanks to her ever-changing, culture-influenced collections and this one was no exception. Feminist cartoon collection? Oh, we were more than ready.

Comic strips of all styles – from pop art to manga – decorated the walls and the outfits of last nights catwalk, but there was one thing every illustration had in common: they were of women, by women. Brigid Elva, Joëlle Jones, Stellar Leuna, Giuliana Maldini, Natsume Ono, Emma RÃ­os, Trina Robbins and Fiona Staples were the illustrators du jour for the collection, with the archive of Tarpé Mills, creator of the first female action hero Miss Fury in the 1940s.

Amongst commissioned pieces for the show, one statement particularly stood out: â€œWhatâ€™ll I wear? I donâ€™t want to look too femme but I donâ€™t want to look too butch.â€ Do you get the message? The Prada woman will wear whatever she goddam pleases. She’s strong. She’s powerful. She’s true to her. (If you can’t already tell, I’m taking a break from typing for a quick paced clap.)

Outfits were layered heavy, so busy they felt like comic strips themselves. With pop art style polka dots, comic strips matched with leopard print, mostly worn with a brilliant mix of traditionally masculine and feminine shapes.

The soundtrack resembled a modern day Spotify playlist, featuring songs from The Cure, Lana Del Rey, Suzanne Vega and Nirvana. It’s only rock n’ roll, but I liked it.

â€œI wanted to show you can be feminine and strong and cleverâ€ said Miuccia Prada, speaking backstage after the show.

No matter the subject, Miuccia always manages to bring a new dynamic of playfulness to her clothes, setting up for cult like status. We all remember that cerulean blue moment from the The Devil wears Prada? Well, feathery heels, sparkly cardigans and corset belts are just some of the current season items we have Miuccia to thank for. Think she just took the vinyl trend to the next level, pop socks anyone?