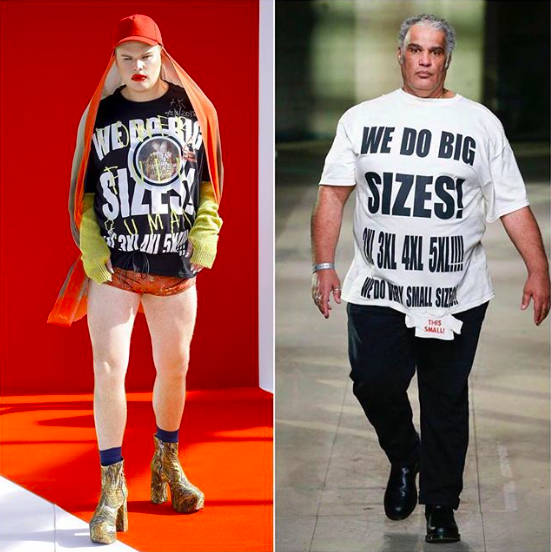 She Might Be: A New Community for Plus Size Fashion

With supposed pioneers of original design and creativity like Vivienne Westwood copying young independent fashion designers without consent nor credit, has the problem of plagiarism within the industry finally reached breaking point?

Yesterday on the catwalks of Paris Fashion Week and the resultant Instagram storm worldwide, the Andreas Kronthaler for Vivienne Westwood Autumn/Winter ’18 collection presented design plagiarism in its most clichéd and obvious form; an exact copy of a t-shirt slogan from Fashion East alumni Rottingdean Bazaar, an emerging brand by two young graduates.

The t-shirt in question was the well-received ‘WE DO BIG SIZES’ tee shown by James Theseus Buck and Luke Brook at London Fashion Week just a couple of weeks ago. The only difference in the Westwood replica was the collage effect over the top, but there is no question that it was directly referenced- and knowingly so, without permission.

This news came as such a particular disappointment because of Vivienne Westwood’s authentic punk ethos, standing up against the abuse of power. What’s more, this otherwise very impressive collection could have had a really positive impact; so heartfelt was the inspiration, a project entirely dedicated from Andreas Kronthaler to his wife Vivienne Westwood based on his adoration for her personal style.

The brand’s apology on social media was weak at best, but at least there was an acknowledgment of wrongdoing- in most cases, the design thief makes no attempt to reconcile the self-destructive (because let’s be honest here: being caught out for plagiarism is brand suicide) act. An example of this was cited in SHOWstudio’s recent panel discussion on the Dior AW18 collection (watch here), where we were reminded of Dior’s ignorance to the values of the People Tree brand as they directly copied a culturally significant print.

Of course, recently we’ve see this kind of shameful knock-off scandal highlighted on Instagram every day. Independent womenswear designer Olivia Rose, based in Edinburgh, recently shared (via IG stories) her experience of a top in her signature style copied nearly like-for-like by another online fashion brand without crediting or referencing her in any way whatsoever.

The Fashion Law is another excellent source of information and analysis of issues surrounding copyright law in the fashion industry in easily digestible (aka dumbed down just enough for us non-lawyer types!) yet fascinating articles. Here are some key pieces from the site to catch up on:

Diet Prada, the platform for calling out widespread fashion plagiarism, has now been embraced industry-wide as the go-to source for accountability and authenticity of designers everywhere. But with the access to ‘inspiration’ from all over the world easier than ever before; will the rampant copycat culture ever slow down, or only speed up?