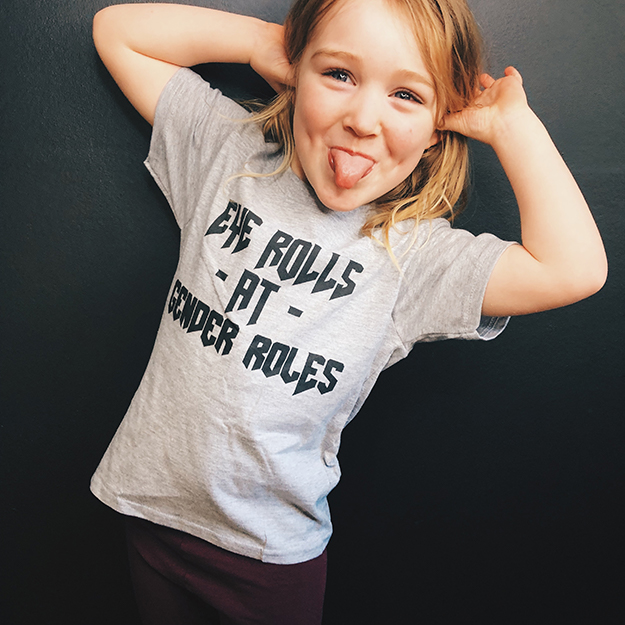 This is my daughter Ophelia. Every single time we go out someone misgenders her. After I correct them they usually go on to point out her short hair or her build (which is gross considering she’s not even two) her lack of typically ‘feminine’ attire and her explosive, adventurous and loud personality. Every single time this happens it reminds me how far we have to go in understanding gender and what it means to be a ‘girl’. Not all girls have long hair. Not all girls wear dresses. Not all girls are feminine.

The idea that femininity and masculinity belong to any gender is damaging. A person can encompass all of these things at the same time. Gender is a spectrum. If a girl likes to run, jump, fight, play computer games, geek out over science fiction, wear no make-up, have short hair and collect tattoos this doesn’t make her a ‘tomboy’, this makes her a well-rounded human being with her own likes and dislikes. There is no right or wrong way to be a woman. Women are ALL these things and more. When we force our children to exist within societies assigned gender characteristics we limit them. We are putting them in a box that is suffocating. Girls and boys need to live and work within a full colour pallet in order to enjoy life and to create.

How stifling must it be to grow, learn and exist in one gendered, predetermined set of rules and boundaries? Girls wear pink, play with dolls and love trying on their mum’s jewellery. Boys wear blue, play sports and love climbing trees and inspecting bugs. Ok sure that’s fine but boys can also love the colour pink and baby dolls and trying on their mum’s jewellery. This doesn’t make him girly, this makes him a fully functioning human. Growing and learning and experimenting.

Girls and boys have to be allowed to explore all aspects of human emotion. Softness, vulnerability, gentleness, strength, aggression, passion… the list is endless but these characteristics shouldn’t be assigned to a gender! How can a person really know themselves or love themselves if they can only exist within these confined parameters that limit their experiences of life?

I know someone misgendering your child or calling them a tomboy may seem like no big deal but it really is. It’s reinforcing the paradigm that contributes to our children’s inevitable suffering. A study published in the Journal of Adolescent Health in 2017 found that children all over the world from every socio-economic background have damaging gender stereotyping deeply ingrained by age ten.

“At this age, the world shrinks for girls, while it expands for boys. Girls are more likely to stay close to home, while boys are given free rein to explore and experiment unsupervised. This is profoundly problematic, but that’s what gets played out everywhere, even in most liberal societies. In many places, the pressure of these stereotypes leaves girls at higher risk of leaving school and experiencing early pregnancy and encourages reckless and risky behaviour in boys”
“” DR BLUM IN NEW SCIENTIST MAGAZINE

We have to stop telling girls that their worth is in their beauty and femininity. The cuter, prettier, quieter, cleaner more well behaved they are the more lovable they become and this results in them having a higher worth or value. This is wrong. Girls, it’s OK to get ‘ugly’. Parents, your daughters don’t have to be cute. They can be messy, they can love trucks and science, they don’t have to have nice hair or be polite. Imagine if we allowed girls to exist in the space between femininity and masculinity. What could they achieve? What if we stopped calling girls ‘tom boys’ and ‘bossy’ and started praising them for their well roundedness and ability to be all things? Would we be closer to smashing the glass ceiling that has lingered over us for so long?

And boys, if no one has told you already, it’s OK to cry. It really, really is. You need to know this. You don’t have to like cars or sports or fighting. Being emotional and sensitive doesn’t make you any less of a ‘man’ but it does make you a better, more understanding and compassionate human being. You don’t have to be a tough guy or be strong. You can like dolls, ponies, the colour pink and dancing. Now imagine if boys were allowed to exist in the space between femininity and masculinity too? Having full access to all the emotions, careers, books, films, toys, art, literature and music available to both genders. Would the suicide rate of young men finally drop? How many more young men need to take their lives before we realise we are suffocating them in toxic masculinity from the minute they are born? 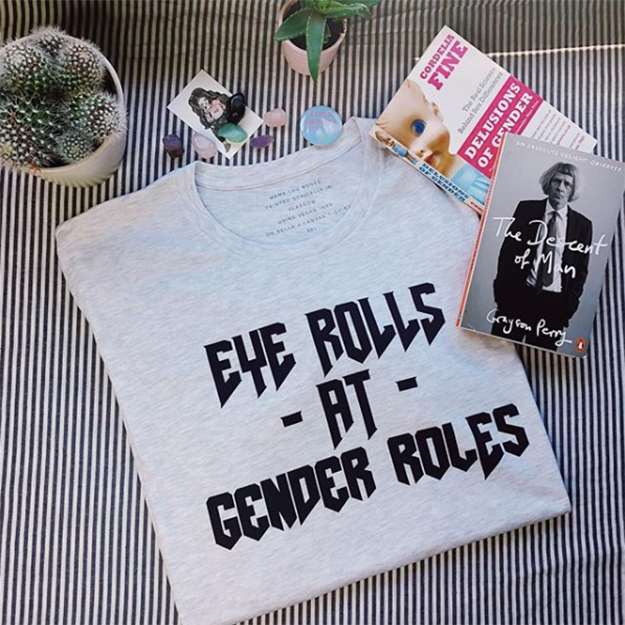 Things to practice – if you see a baby or a child and you want to start up a conversation with the parent or guardian but are unsure of the child’s gender you can say “what a lovely baby/little one! What’s their name?” If the parent or guardian wants you to know the gender they can then say “he or she is called…” if they give the name but not the gender ask yourself why knowing the gender of this little human matters? Will it change the way you engage with or talk about them? If so why? If it’s because you want to use gendered language such as “isn’t she a little angel/cutie – isn’t he a wee handful/handsome” then you are contributing to gender stereotypes that many of us are trying hard to dismantle, so don’t.

In the immortal words of Maya Angelou –