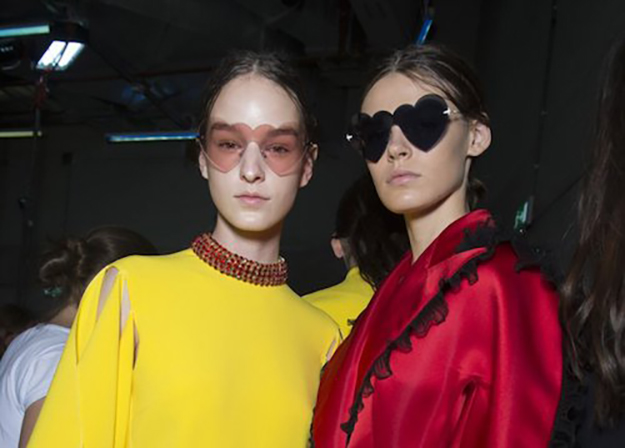 The world seems to be in a meltdown of sorts. Two hurricanes, a devastating earthquake and the prospect of nuclear war have filled up headlines recently but, somehow, it was all business at usual at London Fashion Week. Before we move on to vivacious, larger-than-life world of Milan, let’s have a look at some of the shows that stood out around 180 The Strand and beyond. 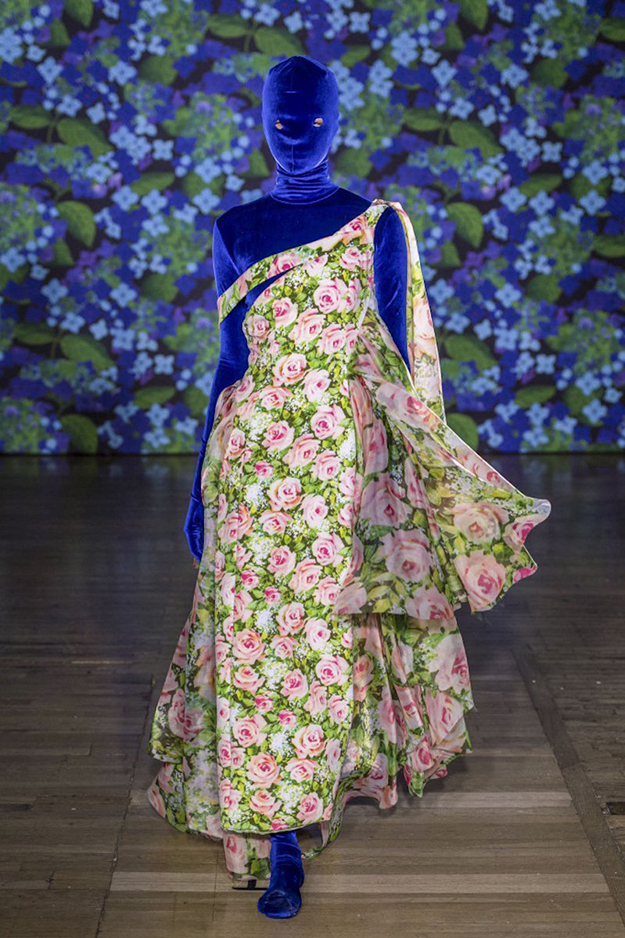 What do you associate with London insititution Liberty? The Cadbury-purple cardboard carrier bags? The flowers out the front? The creaky floorboards on the second floor? The iconic ditzy floral prints? And what about gimp suits? Spandex and S&M vibes were interspersed with blooming florals during Richard Quinn’s show at Liberty earlier this week. The CSM graduate chose to repurpose the department store’s iconic blooms in a decidedly less innocent fashion, as his models took to the runway dressed in bodystockings, layered under flowing coats and bandeau dresses. Jeans and trainers also made an apperance, perhaps as an attempt to temper the avant-garde mood – but they couldn’t really detract from the powerful visual impact of streams of girls in head-to-toe skin-tight velvet and veils. 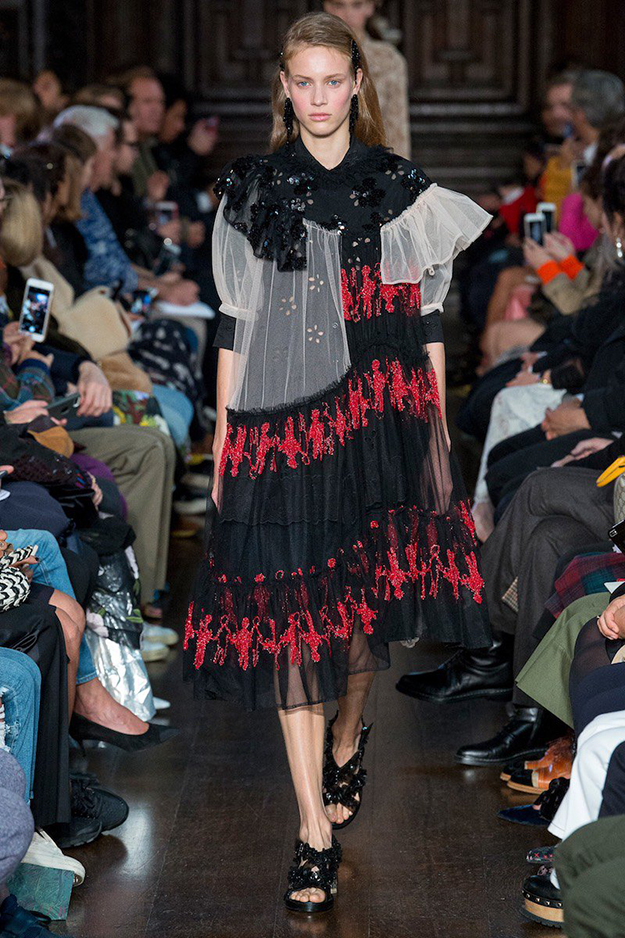 Before writing my runway reviews, I source my images online and try to get some background about the collections. For Simone Rocha’s SS18 offerings, I headed over to Vogue, where I found this illuminating snippet from the Irish designer, interviewed backstage this week: "I used to collect china dolls when I was a kid," she said. "I used to send them down the bannisters so they’d all be smashed." This tells me a lot about Simone Rocha. To me, her designs have always been beautiful-meets-eerie – a bit like something you might see someone wear in American Horror Story – so I can absolutely see her as the kind of warped child to smash up china dolls by chucking them down the stairs. Anyhow, true to form, Rocha went hard with her pretty-meets-perverse aesthetic for her latest collection. Despite using porcelain dolls as a key inspiration source, this collection was arguable more stunning than it was scary, as outsized ruffles, bow detailing and cinched feminine silhouettes took precedence. Broderie anglaise detailing and subtle cut-outs brilliantly subverted prim pieces like voluminous shirt dresses and apron-like overcoats. 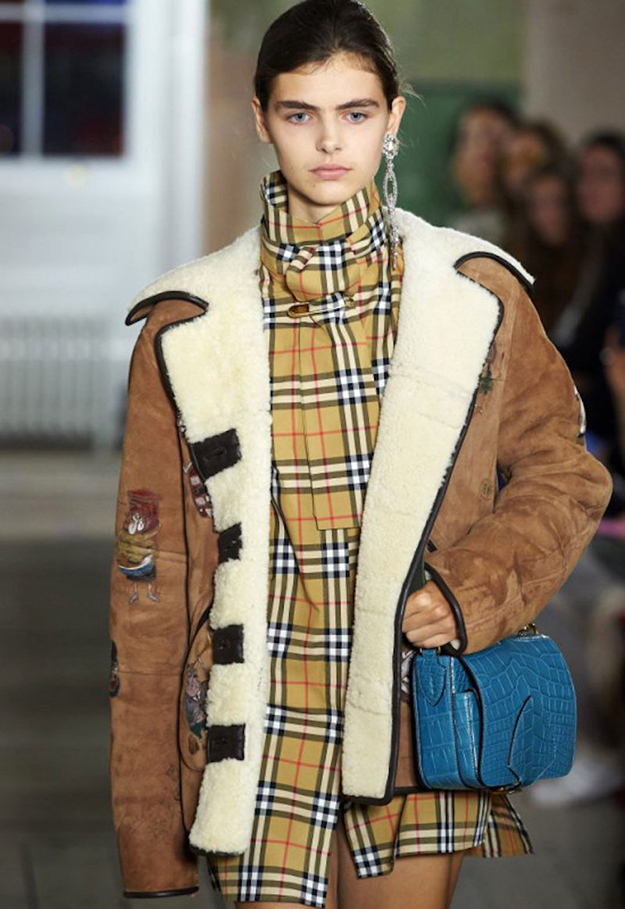 Christopher Bailey has spoken, and he’s declared Burberry’s hallmark Nova Check as officially being back. Which has left some of us questioning when it ever left… but we’ll enjoy it regardless. Anyone who has fashion-savvy teens in their extended family will be well aware that the streetwear set has been scoring Burberry kilts, caps and Nova Check-lined Harrington jackets for at least the last two years so, in a way, nothing felt particularly remarkable or groundbreaking about this collection. However, it’s nice to see Burberry heading back to its roots; reassuring, even, given the uncertain sociopolitical climate Britain has on its hands right now. 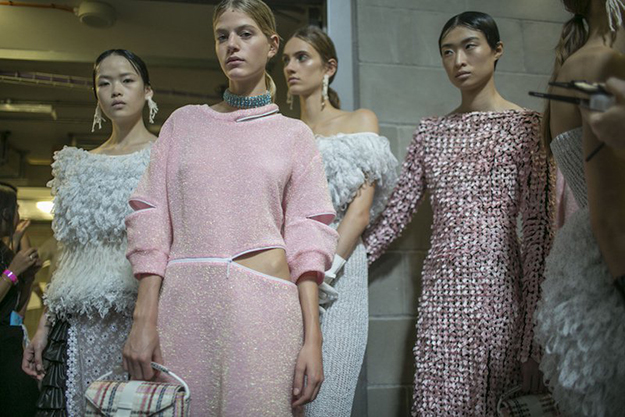 You can always rely on Christopher Kane to pick out the roguest of inspirational sources. This season, it was all about housewives, tying into a broader theme of domesticity, that was pretty easy to pick up on, without reading the show notes, thanks to the Marigold-inspired gloves worn by some of the models (they might have just been rubber gloves, actually). Dresses shaped like bin bags and dusters swept their way down the runway, somehow looking elegant, fresh and desirable despite their decidedly unglamorous backstory; Kane’s now-signature lurex, ruffles and semi-sheer elements definitely took these looks up a notch. We were also treated to the return of some of AW17’s, er, hero pieces. Footwear like kitchen sponge-lined sandals and, of course, those divisive snazzy Crocs were revived, because they’re so bloody covetable. 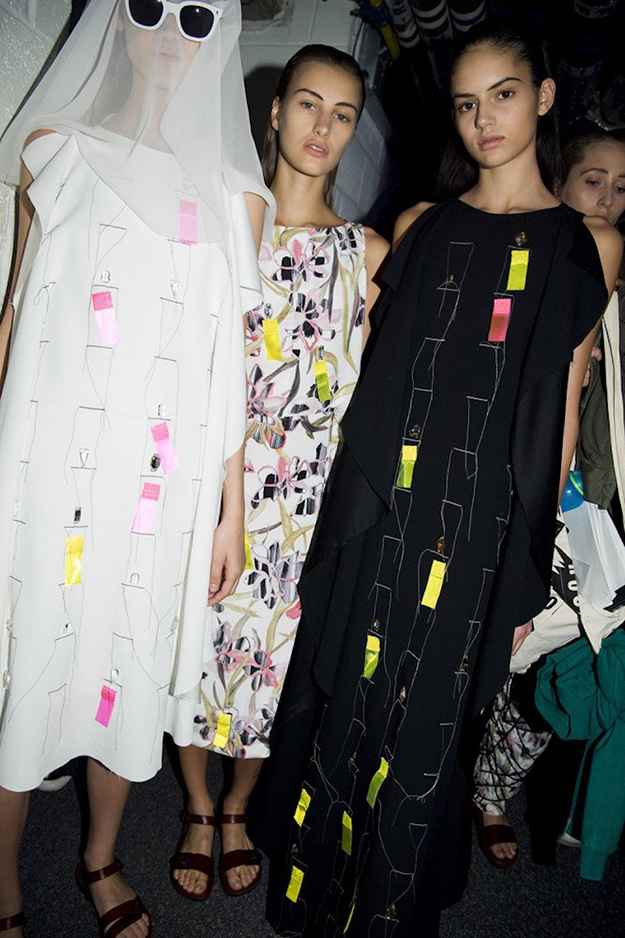 One of my sister’s favourite phrases is ‘if you don’t know, then get to know.’ This is how I feel about Hussein Chalayan. When I was a fashion journalism student, I was frequently appalled by my friends on the course who, despite choosing to study a fashion degree, weren’t aware of Chalayan’s genius. Whenever I showed them pictures of his clothes, they would struggle to ‘get’ them. To be honest, sometimes I don’t ‘get’ Chalayan, because, well, I’m not a genius like he is, and I could never think of clothes in such deep, complex ways. Anyway, I only wish I were still a little FJ student now because Chalayan’s SS18 was surprisingly – I’m going to say it – wearable. Normal. Understandable. The designer’s celebrated precise tailoring took centre stage here, with wraps and drapes and perfectly straight necklines and cape backs exuding beautiful simplicity. Somewhat jarringly, there were also bursts of colour. Towards the end, Chalayan presented his take on our obsession with self-promotion and self-obsession in the digital age in the form of colourful ‘post-it notes’ draped on some dresses towards the end. Told you he was deep!