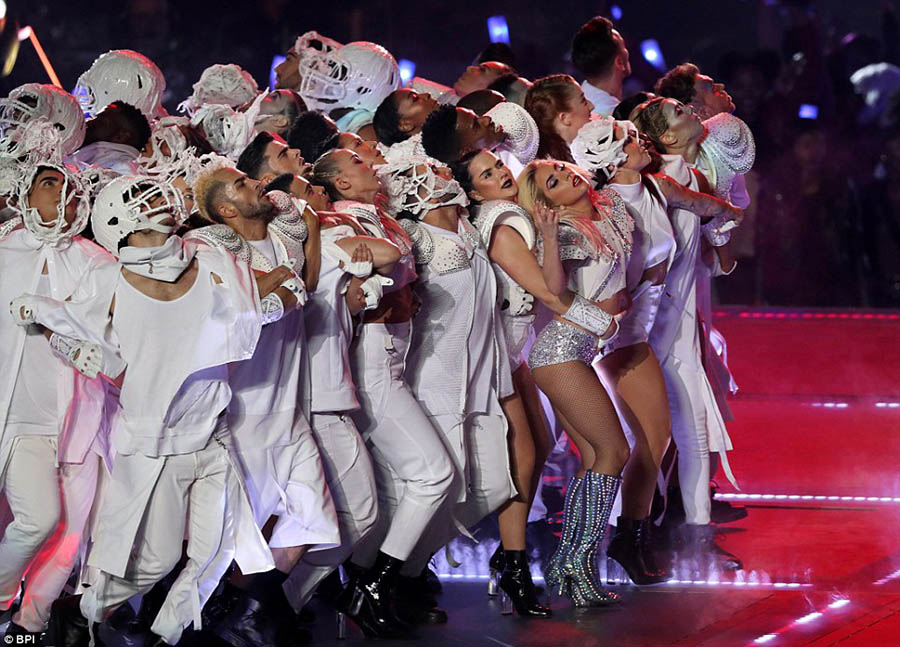 |Lady Gaga is one of our favorite style icons with her mix of grunge and glam. Here’s our favourite outfits of hers from the Superbowl.

Before jumping off the roof of the Houston stadium (yeah that really happened, could you head the collective gasp of the stadium?) she was lit up by hundreds of drones in formation behind her.

Mother monster stayed true to herself and rocked spikes, sparkles and a giant keyboard. There was even a pink GAGA football helmet whilst she was getting ready.

Gaga’s main outfit was designed by Donatella Versace and was covered in thousands of swarovski crystals.

Gaga kept the outfit changes simple, a spiked gold jacket & then a all white ensemble to end the show, showing that you don’t need hundreds of costume changes to be impactful.

Talk about a freaking #queen!! I love #ladygaga and this outfit, this performance was amazing!! She is a goddess!! P.s if you have any extra of this outfit, please send to me.. Xoxo jess

After twitter en mass took to thanking Gaga for making no political message we were honestly a little confused, did no one listen to the lyrics? Born this way is not only a gay anthem it’s a dedicated LGBTQ song, as far as we are concerned she was as political as she could be, considering the multitude of songs she could have picked she went for this, and thats a statement in itself.

Whether you’re broke or evergreen,
You’re black, white, beige, chola descent
You’re Lebanese, you’re Orient
Whether life’s disabilities
Left you outcast, bullied, or teased
Rejoice and love yourself today
‘Cause baby you were born this way

I’m beautiful in my way
‘Cause God makes no mistakes
I’m on the right track, baby I was born this way"

Teen Vogue had this to say;

"Clearly, many people watching didn’t realize that the song "Born This Way" is designed for the LGBTQ community. If you’ve been to a Pride March in the past four years, you’d know a thing or two about dancing to "Born This Way" while you’re surrounded by a ton of glitter, bare skin, and glorious, rainbow solidarity. Let’s just be clear here, though: Performing a song that’s so blatantly gay in front of an audience that includes Mike Pence, one of the most anti-LGBTQ politicians today, is absolutely political €” especially when it contains lyrics like "No matter gay, straight, or bi, lesbian, transgender life." (PS: According to USA Today, that’d "likely" be the first time the word "transgender" was said onstage at a Super Bowl.)

The Super Bowl is a massive display of capitalism, contracts, and fragile masculinity. We can only assume that Lady Gaga had to deal with these constraints as she planned her performance €” especially following the accusations BeyoncÃ© received last year for displaying Black Pride on a national stage. So in this case, rather than not show up at all, she allowed her art to be the activism. She played within the confines and outwitted them as best she could. It’s up to us to read between the lines."

And we couldn’t agree more.

Read the full story here along with the NY times article here.