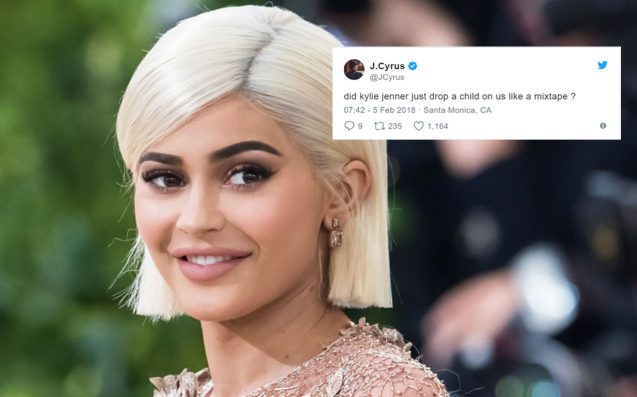 | Kris Jenner made Kylie announce her pregnancy on the day of Super Bowl and got all the attention. The devil works hard but Kris Jenner works harder!

A lot of people woke up Sunday morning thinking it was any other day. That was until they found out Kylie Jenner and boyfriend Travis Scott have finally welcomed their beautiful bubba into the world, and predictably, the internet went pretty damn crazy.

After months of radio silence on social media, Kylie dropped a video and a statement around 3:30 p.m. on Sunday, announcing that she’d given birth to a baby girl on Feb. 1. Now a lot of people are like, "Super Bowl, who?" Memes & tweets about Kylie’s baby vs. the Super Bowl are taking over Twitter and we found them just as entertaining as the news itself.

Justin Timberlake: Tonight is my night! Nothing's gonna top this! I'm a Man Of The Woods„¢!

Even our faves at Man Reppeller got in on the action!

It’s safe to say that Kylie Jenner’s pregnancy has basically won the meme olympics for loyal patrons of the Internet. The kid doesn’t even have it’s name announced yet and still it’s trending over 5 different hashtags around the world.

Me: I literally don’t care if #kylie is pregnant.
Me watching kylie’s 11 minuets baby video: pic.twitter.com/UmySG9ZsnI

January was so long that Kylie Jenner gave birth to the child nobody was even sure she was having pic.twitter.com/LStarbrhBV

me: i can’t stand the kardashians

*watches the video kylie jenner put together for her baby*

me: “i dont care about the kardashians”

me after watching kylie’s video for her daughter: pic.twitter.com/FHGWTSnBfX

So the world found out about Kylie’s pregnancy AND got to see Kim and Kanye’s new baby for the first time. All at once. ON THE SUPER BOWL. Sounds like the work of Kris Jenner. pic.twitter.com/LgkMvkY1Xn

If you haven’t seen the full video (who even are you?!) I’d advise you grab the Kleenex and catch up with the rest of the internet already.