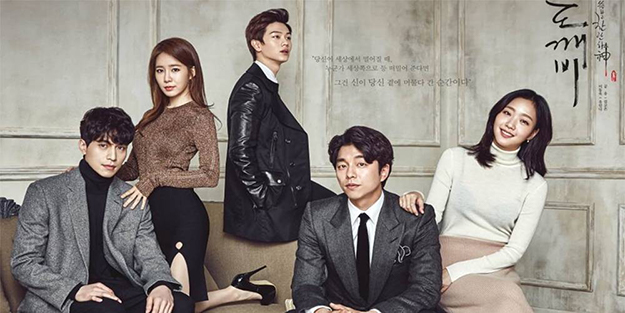 A time-jumping 90’s pop star? An exorcist that beats up ghosts? Alien boyfriend? A time-traveling tunnel? What about a vampire doctor? If this has piqued your interest at all, you are in luck: welcome to the world of Korean dramas. Before we start let’s just get this out the way because it’s the first thing everyone asks: yes, there are subtitles and no you won’t notice them after a while. If this is a dealbreaker for you then you’re going to miss out on a world where an old male gangster can die and be reincarnated into the body of a hot young woman. Give them a chance and forever be grateful to me for bringing these into your life.

Like most cult things, it only really makes sense once you are indoctrinated. I like to explain them as a mix between American soap operas and 90s/2000’s teen movies with a tiny bit of Disney channel original thrown in. Unlike Western TV most K-Dramas will run for one season (around 12-24 episodes) meaning all series come to definite conclusions, which means no annoying season ending cliff-hangers. Speaking of cliff-hangers, K-Dramas love them; almost every episode will end with a dramatic cliff-hanger which just speaks to their theatrical nature. They can be a campy or ridiculous, but at the same time they can be moving or even heart-breaking. Honestly, I will probably never get over the death of a Grandad in this one drama; I cried my eyes out. Even now I remember how he loved chocolate and wore his glasses upside down and had a Nemo toy… oh my god it was so sad!

Genres
While most dramas will have a romantic element, there are specifically rom-com dramas. K-Dramas are PG to the max – like seriously it may take to 10 episodes for the romantic leads to actually kiss – and there are absolutely no sex scenes, so if that’s what you’re after then look elsewhere, you thirsty bitch.

There are the historical or period dramas which generally take place in the Joseon or Goryeo period of Korea. While personally I’m not a huge fan of period dramas – Korean or Western ¬– they are really worth watching for the costumes alone, which are spectacular. There is the super popular high school drama, which is a common gateway into K-Dramas as they tend to be most K-Pop idols’ first foray into acting. Like most dramas, high school dramas tend to be pretty melodramatic, but also heart-warming, with some definite after-school life lessons thrown in for good measure.

Some of the more outlandish stories come from the fantasy dramas. Whether there are supernatural elements such as vampires, ghosts and possession, or more sci-fi elements time travel and aliens, these dramas can sound, well… dumb. But, some of the best K-Dramas have a fantasy basis, so please check your prejudices at the door. Occasionally the fantasy aspect will be based on mythology or folklore specific to Korea or Asia, which provides a refreshing take on overdone fantasy tropes.

Lastly is the crime and action genre, of which there are loads to choose from. These dramas will vary from police stories, to spy or revenge thrillers and generally the fight or action scenes are really well done. Another thing to note is that there are some regulations of what can be shown on TV in Korea so occasionally things will be blurred out (I’ve noticed it tends to be knife blades) but it doesn’t ever get in the way of you enjoying the action.

Here I’ve listed what I see as the main genres, but there are some other sub-genres that pop up over and over again like business and finance dramas, or medical dramas. I also haven’t listed comedy as a genre because unless the dramas are especially serious they will always have an element of comedy, even if it just to break the tension.

Something that is really confusing when you first start watching dramas is that sometimes – well, all lot of the time – the dramas will have different titles. What I mean by that, is you will see a drama listed one place under one title and then the same drama could be called something different elsewhere. This is due to the subjective nature of translating, as most phrases or names can actually have multiple interpretations, all of which are correct.

The product placement can be a little distracting at first and at times can be truly awkward. Of course while we all understand that product placement isn’t going away any time soon, it does tend to be super obvious within K-Dramas and can be pretty inappropriate within the narrative. The down on their luck protagonist will work at a particular brand of coffee shop, or everyone in the entire drama will all be using the same brand of phone, and like… why the hell are they suddenly in Subway… like, why? Again, you get used to it but to be honest there will always be times when it will be a little jarring.

Although the dramas are subtitled there are certain phrases that will come time and time again which can be a little confusing, due to the Korean vernacular being unfamiliar to most native English speakers. Here is a little breakdown of the most common and confusing phrases.

Goblin: probably my favourite drama, this fantasy romance centres around a goblin, which according Korean mythology is more God-like figure rather than a little green man, searching for his bride, to end his immortal life… oh, and there is a grim reaper too.

The Master’s Sun: supernatural/horror, centring around a woman who after a near-fatal accident can see ghosts. Don’t worry if horror isn’t really your thing, the ghosts very quickly get less threatening.

My Love From Another Star: one of the most popular dramas in the past few years, it tells the story of an alien who falls in love with an actress. Made even more successful by the chemistry of the two leads, this is definitely a must watch.

Signal: probably the best written drama around, and is actually much darker than many dramas. A police thriller jumping back and forward in time to solve cold cases inspired by real crimes.

The Best Hit: more on the light-hearted side, The Best Hit tells the story of a 90’s pop star who is mysteriously transported into the present day. Fully living its Disney movie fantasy, this drama has the perfect balance of genuine characters, fun and a plethora of celebrity cameo appearances.