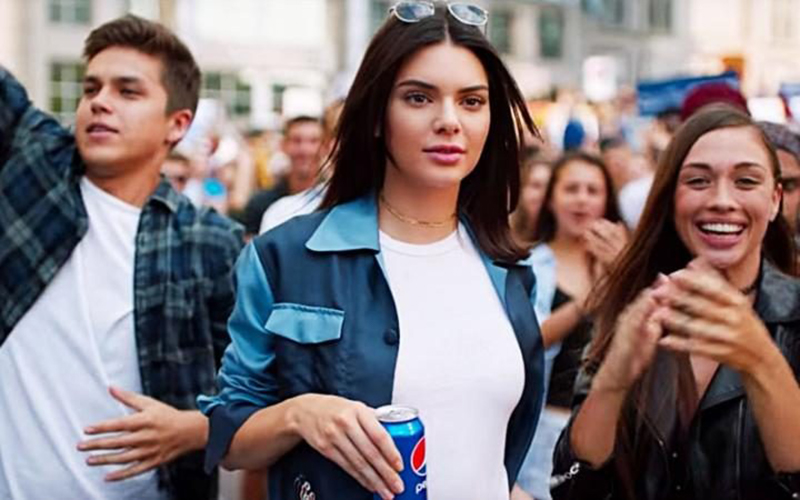 | Oh Kris Jenner, what were you thinking? The momager slipped up here, and this scandal may have tarnished the supermodels career & confidence for a while.

The backlash for Kendall Jenner’s new ad landed the second she flicked open her can of Pepsi. Was this a joke? Was Pepsi really exploiting the recent #BlackLivesMatter protests – and was that ‘wig moment’ an example of racism in action?

In less than 24 hours since Pepsi released its new ad, the criticism has not abated. On social media, it continues to be heavily mocked, ridiculed and condemned, as users demand a response from the global drinks company.

The two-and-a-half minute advert features Kendall Jenner being photographed in a glamorous outfit. As she sees a multiracial protest (and a hot protester) outside, with banners featuring love hearts and peace signs, she is inspired to take off her wig, wipe off her lipstick and head into the crowd as ‘just another normal protester’.

There, she ends a stand-off with a police officer by handing him a can of Pepsi. As he takes it and smiles at her, the crowd cheers. Jenner has saved the day! She has reminded the world that differences don’t matter when Pepsi is involved! Who needs hatred and tension when you have carbonated sugar!

It echoes a real-life incident during a Black Lives Matter protest, where female protester Ieshia Evans tried to approach heavily armed police in riot gear in Louisiana last year. Unlike Jenner, who wins a smile and applause, Evans was arrested and charged by police.

No wonder that people have criticised the ‘tone deaf’ ad for exploitation. Jenner’s sugar-coated version of real-life protests just goes to highlight her privilege and the inequality that exists in the world. But that’s not the only problem with the ad. Let’s not forget these other moments€¦

When Jenner-the-model sees the protest, she whips off her platinum blond wig, and without even looking at the woman to her right, just chucks it at her. Said woman, who is black, stands there holding the wig in confusion. White privilege in action.

The worst part of the Pepsi commercial is when Kendall decides to protest racism by making a black woman hold her wig. pic.twitter.com/NEfSwXqJvm

The actual Pepsi can bit

No one believes that Pepsi can achieve world peace, not even Pepsi. But the premise of giving a police officer a drink as a gesture of goodwill is also completely unrealistic. A real-life protester took to Twitter to share an image of someone in Baltimore offering a police office a bottle of water. €œNothing changed.€

The whole ‘whipping off the wig to be a normal protester’ undermines the entire concept of why people protest. It isn’t the Instagram-worthy moment that Jenner seems to think it is; it’s about people coming together to express their views on social justice issues they want to change.

Kendall Jenner: Can I copy off of you?

Kendall:* Looks over shoulder anyway*
Damn that. I'm getting this Pepsi money. pic.twitter.com/NUXwCZnM7p

As nice as it is for the lead ‘hot guy’ to be played by someone who isn’t white, the idea that people protest as a way to bypass swiping on Tinder is wrong. See above.

If your only experience of protesting came from this Pepsi ad, you’d be forgiven for thinking that a protest is an extension of Glastonbury festival complete with spontaneous dancing, pop up hipster kiosks and loving embraces. In reality, many Black Lives Matter protests have ended in violence, tear gas and arrests.

Her cheer at the end

Given everything problematic about this ad, the least that Jenner could do is to really throw herself into this protest. But when the camera comes to her for one last shot at the end, her ‘woo-woo’ rings as hollow as an empty can of Pepsi.