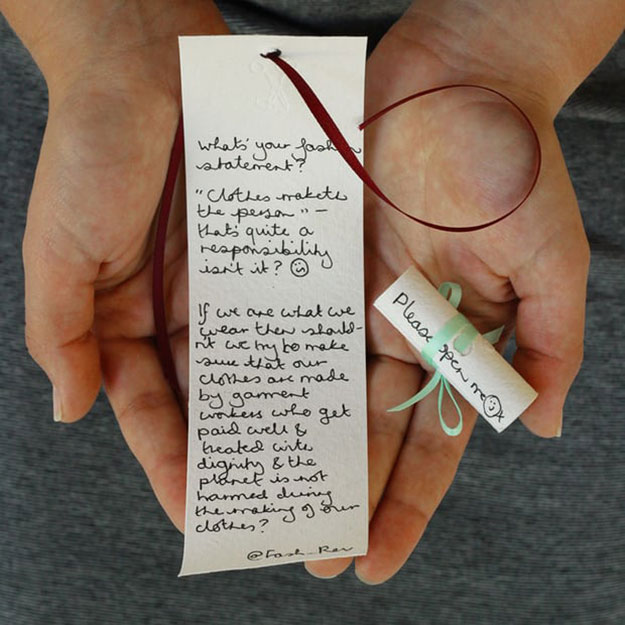 Day In The Life Of: Illamasqua Founder, Julian Kynaston

This London fashion week, shoppers might find themselves pondering something a little more sobering than which bar does the most Insta-worthy Louboutin-inspired pop-up cocktail menu, or how to get front-row tickets to the House of Holland show. Craftivist Collective is a group of “gentle activists” that protests against injustices in a quiet, non-confrontational manner involving pretty, handcrafted gestures of defiance.

In an attempt to shine a spotlight on the ethics of the British fashion industry, its members will be spending the four-day clothing festival in high-street stores near LFW’s Somerset House base engaged in “shop-dropping”. This involves creating messages of protest, taking them into retailers and planting them inside the pockets of clothing for consumers to find. The name stems from the fact that it involves adding extra items into stores, thus making it the antithesis of shoplifting – although retailers are unlikely to appreciate the additions.

“The shops have no idea we’re doing it at all, but I can’t imagine they’d be happy if they knew,” says Sarah Corbett, the founder of Craftivist Collective, which previously convinced M&S board members to pay the living wage by stitching messages on to hankies. “We’re targeting fast fashion shops that put profit over people and the planet, so I don’t think they’d be keen on us encouraging their customers to ask questions about how their clothes were made.”

The messages take the form of “fashion statements” that are neatly handwritten on miniature scrolls. These are tied shut with a ribbon bow and contain phrases such as: “Beauty is not just in the eye of the beholder … It is woven into the very fabric of the cloth. Our clothes can never be truly beautiful if they hide the ugliness of worker exploitation.” On the outside, they say: “Please open me.”

Corbett started shop-dropping at Stockholm fashion week in 2014, in collaboration with Fashion Revolution, a campaign group opposing worker exploitation that launched in the wake of the 2013 Rana Plaza factory collapse, which killed 1,135 garment workers in Dhaka, Bangadesh.

For the past three years, she has been running workshops that teach craftivists how to make the fashion statements. She brings a rail of clothing that lets them practice looking natural while sneaking scrolls into pockets; as a rule, it’s not a form of protest that works in large numbers.

How to Get Through Wedding Season Stress-Free

“We want people to discover the scrolls later on so that it’s intriguing. We hope that it might create genuine curiosity about how their clothes have been made,” – Corbett.

“I genuinely love fashion, and during fashion week there’s a spotlight on the industry. I’d like to use that so we can think about how fashion could be beautiful on the inside as well as the outside.”

How to be a Craftivist by Sarah Corbett is published by Unbound on 5 October.

Written by Alexi Duggins for The Guardian