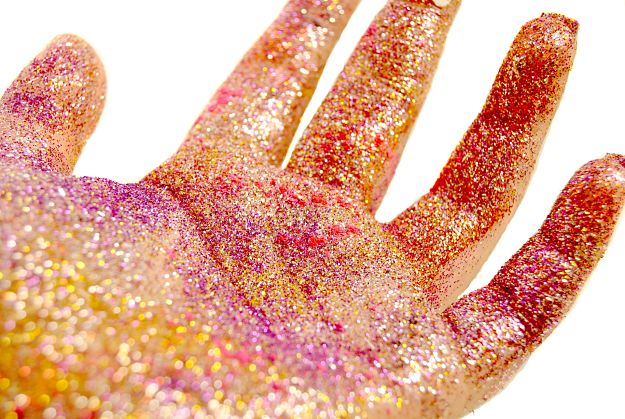 | All that glitter, and all that gold… won’t reverse the damage done to the environment from glitter lips and glitter hair.


Glitter. That sparkly stuff we love to cover ourselves in. It’s harmless, right? Wrong! Those little shimmering specks have a terrible effect on the environment and marine life once we’ve washed them down our plug holes. If you celebrated the ban on microbeads in cosmetics (for the very same reasons), it’s time to look at glitter as being next in the firing line.

We don’t have to ditch our mermaid and unicorn selves – there are alternative, eco, ways to make glitter that doesn’t cause that horrible damage to our planet. Many companies are now producing biodegradable glitter, and I spoke to three of them (Glitterlution, Eco Glitter Fun and GLITTERREVOLUTION) to get the lowdown on why what they do is so important.

Why is normal glitter so bad for the environment?

Glitterlution: Traditionally glitter is made from PET plastic. We’re all getting familiar with how dangerous plastic is for marine life, but glitter is a special case because it is a single-use microplastic which then typically gets washed down the drain and into the water system after one use. Microplastics are particularly bad because they get through the filtration systems into the ocean very quickly due to their small size, where they are eaten by tiny marine life who mistake it for food. This makes its way up the food chain and poisons wildlife, and even makes it back into the human diet.

GLITTERREVOLUTION: Normal glitter is made by coating a PET film with pigments and then cutting it up into tiny teeny pieces. PET is an abbreviation for polyethylene terephtalate — in scientific terms, it’s one of the most commonly used thermoplastic polymer resins, which can be found in clothing fibres, food containers, and all sorts of building materials. In simple words, normal glitter is a microplastic. Anyone who has ever used glitter knows that it is notoriously difficult to pick up because the pieces are so small. That means when you are done using it, whether it gets blown away in the wind or it gets washed down the drain, it will eventually find its way into the global water ecosystem. All of the microplastics from all of these different sources accumulate in the ocean where fish and other marine life might accidentally consume it, and because it doesn’t break down, it gets carried up the food chain… and even if we don’t realize it, we end up eating it. It’s not good for a healthy ocean and it’s not good for healthy humans.

What actually is eco glitter and how is it made?

Glitterlution: Our glitter is made from regenerated cellulose – a sustainable, vegan and non-GM product with no animal or human rights abuses all the way up the supply chain and all the way through the life cycle. It is safe for accidental consumption by living things, and also degrades in nature in a time frame of 30-300 days.

Eco Glitter Fun: Our eco glitter is made from a certified biodegradable film derived from sustainable and environmentally sourced wood pulp, primarily eucalyptus trees. Biodegradation is initiated in soil, compost or a waste water/ocean environment where micro-organisms are present.

GLITTERREVOLUTION: Our products are made the same way as "normal" glitter, except the base film is made from a plant-based material instead of from plastic film. The base film used in GLITTEREVOLUTION products is derived from eucalyptus tree fibers. Eucalyptus trees are a great source of renewable raw materials because they are one of the most widely available and fastest growing species of trees on the planet. Some makers are also creating glitter-like substances that are mineral-based, made from mica. However, mica-based glitter alternatives will typically be less shiny than glitter made from plant-based material.

Why aren’t all glitter brands offering eco glitter? Is it more expensive to produce?

We believe that all cosmetic glitter brands should be using Glitterlution bio-glitter as actually the cost compared to premium cosmetic glitter is not a huge difference, and the glitter is only used in small amounts. Up until now the colours have also been very limited, but we now have 250+ glitters in about 30 colours. There’s good news for crafters too – Glitterlution will be releasing a new, cheaper, craft version of bio-glitter in the new year, so there will be no excuse to keep using traditional glitter!

Eco Glitter Fun: Eco glitter is unfortunately more expensive at present. Many glitter brands are switching over, but this will take time. There are also no holographic, iridescent or other shapes beside hexagon, but these are in-development. The more people making the switch will lead the manufacturer to be able to develop a greater range of shapes and colours.

GLITTERREVOLUTION: Yes, biodegradable glitter is more expensive than traditional plastic glitter. It is made with higher quality raw materials. Plastic is cheap. And even though the price for sustainable glitter may be higher, the glitter brands that sell eco-friendly glitter actually make much smaller profit margins than brands that sell plastic glitter. Brands that are selling biodegradable glitter have to be motivated by more than pure profit. It’s about raising environmental consciousness. The thing is, the price of normal glitter doesn’t take into account the true cost we all pay — which is the irreversible damage it does to the environment.

Like there was with microbeads, do you think there should be a ban on normal glitter?

Glitterlution: Microbeads are slightly different because there were always plenty of substitutes for microbeads which were natural and/or biodegradable, such as sand, seeds, cornflour etc, which perform just as well and are also just as cheap. Banning microbeads was therefore a no-brainer but nevertheless a great triumph. Until now there has not been a biodegradable replacement for plastic glitter, so I can understand a ban was not justified. You can argue we don’t need glitter, but glitter is an amazing expression of creativity, vitality and life, and if we ban everything we don’t â€˜need’, where do we draw the line?

However, now that we have Glitterlution Bio-glitter, that reasoning no longer stands up, and as the glitter range gets wider and cheaper there will be less and less justification for using plastic glitter, and I think a ban would be appropriate. Some festivals have taken the initiative and already ban all plastic, plastic glitter, or in some cases all glitter. We are in favour of all these approaches as they are all preferable to doing nothing. Although we’d obviously prefer bio-glitter to be allowed.

Eco Glitter Fun: There are some legitimate uses for plastic glitter and some applications require it. However, for single use in the cosmetics and craft industries, we believe there is no need to use plastic glitter when there is an eco-friendly alternative. A restriction on glitter which is below a size that cannot be filtered in the water system should be enforced.

Why We Should All Be Feminists

GLITTERREVOLUTION: In theory yes, it would be great to have a ban on normal glitter. At the very least it would be a great way to raise awareness about the negative environmental impact of using normal glitter. But in practice, this would be very difficult to enforce. To the naked eye, it’s hard to tell the difference between traditional plastic glitter and the more eco-friendly, biodegradable glitters that are now becoming more widely available.

There are a few ways to tell the difference between sustainable glitter and traditional glitter though. One way to tell is that plant-based glitter is about 30-40% softer than polyester glitter, or plastic glitter. Because it is made with plant-based material, biodegradable glitter is much less abrasive, so it will feel softer on your skin. The other dead giveaway is colour and shape – currently, truly biodegradable glitter comes in a limited number of colours and shapes. If your glitter is chunky, holographic, iridescent, or comes in confetti shapes (such as hearts or stars) then you can be certain that it is made with plastic film.

How do we educate more people about the dangers of normal glitter?

Glitterlution: We are working as we speak on an international coalition of the bio-glitter trade so that we can speak with one voice and fund advertising campaigns and also lobby governments. Through this we hope to raise awareness in both the public, the craft and the cosmetics industries; in the government; and also bring about a kite-mark system so that the public can easily tell the difference between real and fake bio-glitter sellers.

Eco Glitter Fun: We feel making the public aware of the polluting effects of plastic glitter is fundamental to change the attitudes and buying habits of consumers. We try as much as we can to spread the word about biodegradable glitter and micro plastic pollution. Articles like this are invaluable for spreading awareness on this topic.

GLITTERREVOLUTION: Education is happening now, slowly but surely. There are many glitter lovers who also want to be conscious caretakers of the environment. As they start to find out there are biodegradable alternatives to traditional plastic glitter, they are quick to spread the word. To help accelerate the shift away from plastic glitter towards more environmentally sustainable options, it would be great to see event planners and festival organizers start to take responsibility for informing people and suggesting alternatives, even if they don’t have the ability to enforce an outright ban on plastic glitter.

So, it seems a ban on plastic glitter is still some way off, but it’s great that awareness is building and eco-friendly alternatives are being further developed and improved. I also spoke to Debbie Moorhouse, who is a researcher specialising in sustainablility at the University of Huddersfield. She also makes the point that â€œmore than banning products, materials urgently need to become more sustainable and designed with consideration to the product lifecycle, such as recyclable and biodegradable, with natural dyes that are safer for both people and the environmentâ€.

I think the way forward is to continue to try and educate more consumers about the dangers of traditional glitter, so that they start to push against purchasing and using it; forcing more eco-friendly and more affordable alternatives to be developed by traditional glitter brands. What are your views? Let us know by tweeting @fashionfixdaily.