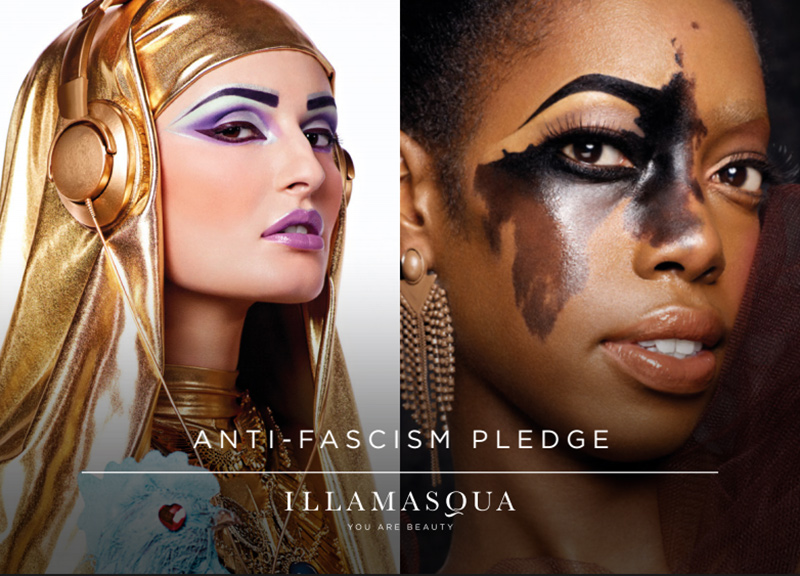 Style Meets Politics at the Oscars 2017

Activists on the catwalks, the return of political slogan T-shirts – and now a beauty company is boycotting some of its customers.

Is this simply another controversial campaign? Or proof that when global politics are in turmoil, the fashion and beauty industry can come out fighting?

This season, when you’re browsing online looking for a new lippy, you may notice something a bit strange. Instead of a beauty ad vying for your attention, persuading you to pull open your purse strings and spend some of your hard-earned dolla, you might just see a poster from a brand telling you that you CAN’T buy their stuff. 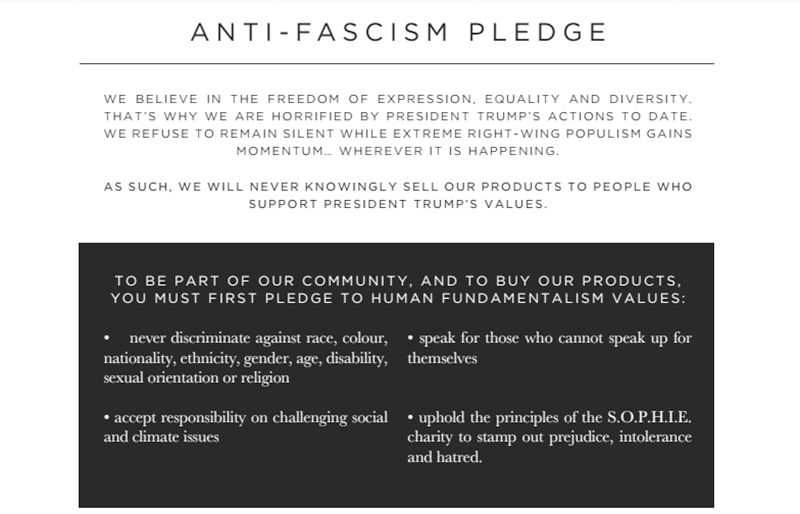 Yup. Makeup brand Illamasqua is now banning some of it’s customers from purchasing products. The cruelty free cosmetics company is telling Trump supporters: €œDon’t buy us€.
Illamasqua says they will not knowingly sell to people who share €œTrump values€ and their online store even asks customers to take an €œanti-fascism€ pledge before shopping. Julian Kynaston, Illamasqua founder, said: €œNo matter how hard some people work to make themselves beautiful on the outside, makeup can never hide the ugliness inside.€

When your favourite make up brand does this, making themselves your only make up brand. #illamafia https://t.co/dv7ktaIfwt

Illamasqua’s move is just the latest in a series of protests made by those in the fashion and beauty industry. On the New York catwalks, the A/W 2017 collections functioned as a call to arms against the new White House administration. Prabal Gurung sent every model out in a politically motivated T-shirt, including €œI am an immigrant€, €œMy girlfriend is an immigrant€ and €œRevolution has no borders€, before taking a bow in a tee that proudly stated: €œThis is what a feminist looks like€. Designer Christian Siriano observed €œPeople are people€ and Creatures of Comfort argued, €œWe are all humans€. Mexican designer LRS’s white knickers were splashed with the ever-so-subtle: €œf*** your wall€.

At London Fashion Week, British designers were also quick to take a stand. Ashish sent models down the runway in a kaleidoscope of colours and sequins, spelling out exactly what was on his mind. €œMore Glitter Less Twitter€ shouted one tee while another was stamped with the words:’Love Sees No Colour’. A fox-embellished mini dress read, ‘Stay Woke’ while a cat tee proclaimed, €œPussy Grabs Back!€.
But it seems not everyone is buying into it. Like the designers chasing political slogans, Illamasqua has come under fire for €œjumping on the bandwagon€ according to one Twitter user. Others have accused the company of discrimination for boycotting Trump supporters. Someone even posted a Tweet accusing the company of being €œTwitter Fascist€

What Is Vegan Fashion?

So the question remains, is it possible to be ‘consciously commercial?’ It is important to be objective. Brands are there to make money. And these mega-watt labels are not idiots – they’ve not only got their eye on what’s trending on Instagram, they also pay huge sums of money to understand, predict and interpret exactly what their consumers are craving next.

And it seems like protesting in the new power brunch: Instagrammable, taggable and everyone is at it. Why? Because like politics, buying power is everyone’s business. For starters, we all shop – even those of us who like to do it ethically and consciously. So it is only natural that we buy the brands that not only make us feel great, but represent who we are. From lippy to Louboutins – if we don’t believe in the label and what they sell, we won’t be buying it. Simples. The success or failing of brands lies directly in our hands. And we want to see more of labels who demand inclusivity, freedom of expression, who want to tear down walls and aren’t afraid to shout about it. Who’d have thought it – shopping has become the ultimate democratic act.

I don’t know about you, but I’m grabbing my credit card like the future depends on it. Because it kinda does, right?