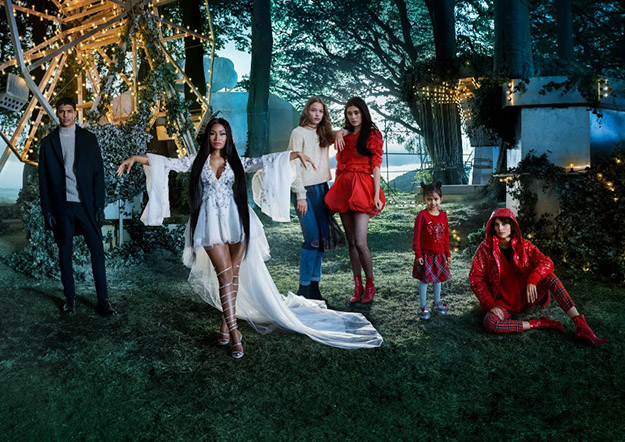 ‘A Magical Holiday’ is the new seasonal advert by Swedish high street giant H&M. The campaign, inspired by fairytales and bedtime stories, stars fashion and musicicon Nicki Minaj, who is also bringing out a new capsule collection in collaboration with H&M next year.

Directed by Johan Renck, the tale sees rapper Nicki Minaj and Grey’s Anatomy star Jesse Williams getting their young daughter to bed. To do so, Williams must read her a bedtime story, which results in him improvising with his own version – a fairytale based on a little girl who saves Christmas. ‘Once upon a time, there was a girl who had a chemistry box, and one day she happened to create a tiny black hole, a hole that plunged her into a parallel universe,’ he begins. That subtle move is seemingly H&M’s way of nodding to the idea of science for young girls, as is the fact the daughter then becomes the protagonist and hero of the story. In this parallel universe there lives the evil brother of Father Christmas, played by John Turturro, who must be stopped. The little girl turns to the “Wisest Thingy” (Minaj) and the “Fastest Fairy in the World” (Williams) to try and find him, but eventually is able to only do so by, quite naturally, enlisting the help of the internet." – Fashion & Mash

A thoroughly modern fairytale, this new campaign not only gives a dusting of sparkles and Christmas cheer, but gives a big old nod to female empowerment, which is refreshing to see in the season of sexist adverts. In this reimaging of The Grinch, featuring a catchy remix of music from The Nutcracker, comedy and fashion marry perfectly. And the best part? It was all filmed in Scotland! Watch ‘A Magical Holiday’ here: