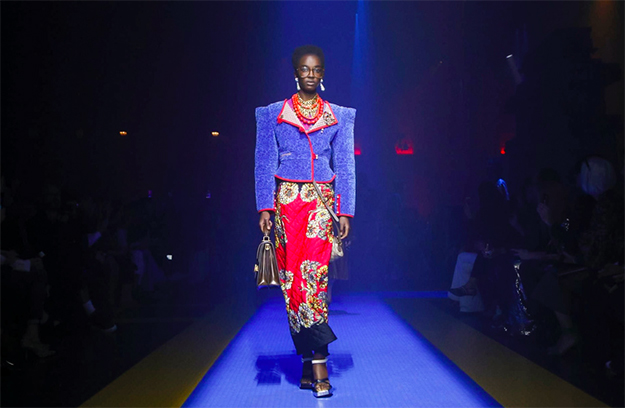 Pet Hates of Every Fashion Student

The collection was directly inspired by original designs created for the singer-songwriter by Bob Mackie, Annie Reavey and Mr Freedom. These pieces included:

My top 3 favourite looks from the mixed-gender collection were:

It was pleasantly surprising to see a collection from Michele that aesthetically felt different from the past few years of Gucci-dom, where everything was red, green and heavily embroidered/embellished/decorated. There has certainly been a feeling amongst the industry that Gucci’s mad success and very consistent formula must at some point come to an end.

Now, I don’t see the brand’s popularity ending any time soon; especially with today’s presentation chock full of garments and accessories aching to be sellouts worldwide (you could practically see the buyers salivating over the new handbags and sunglassses), but an alternative design direction would be a welcome thing indeed. It seems a refreshing concept for Michele himself too; in fact, he told Vogue before the show:

"It’s been hard for me from the beginning but now it’s really hard, because I think that fashion is the only language that wants to keep the old rules and expect something that doesn’t work for me and my idea of fashion. When you watch the show you can see what I’m trying to do: I want to stay in my aesthetic. I don’t want to run because I know the company works in a very fast way, but that doesn’t lessen the creative act- It’s about what is the playground of Gucci: I want to stay, I want to feel, and I want to dilate this little swimming pool and turn it into an ocean."

We can’t wait to see what else in in store for this season’s Milan Fashion Week after a killer first day! What do you think of the #GucciEltonJohn collection?