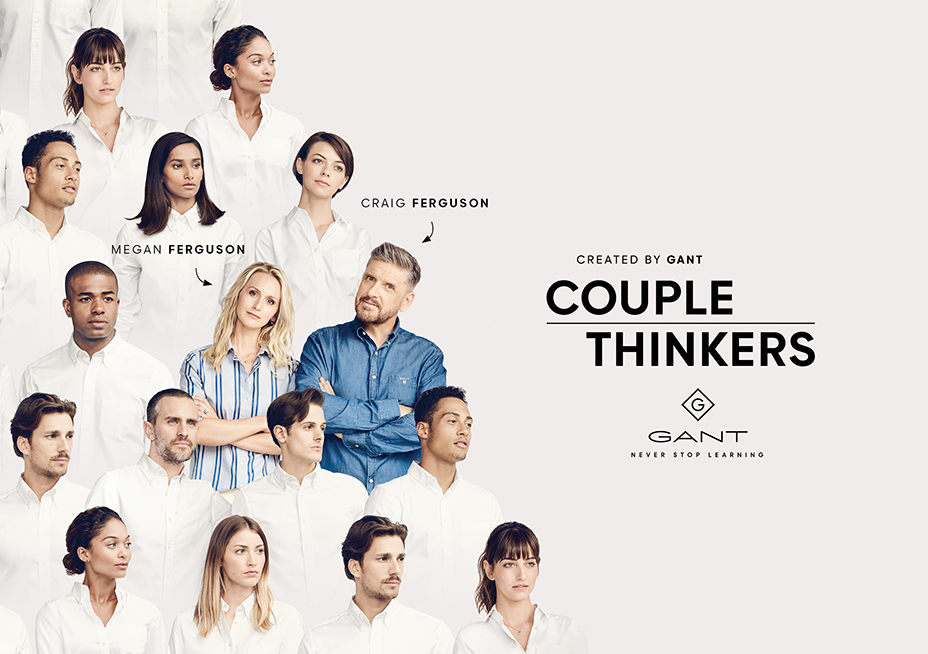 Is it a documentary? A talk show? Or is it an ad in disguise? Well, turns out it’s somewhere in between! Former presenter of the U.S’s Late, Late Show, Craig Ferguson and his wife Megan are launching a new type of series in collaboration with American Sportswear giant, GANT, which is pretty much changing the game when it comes to sponsored content and how we see it. Introducing, Couple Thinkers.

Dedicated to the discussion of weighty ideas (while dressing sharp), each week the series will follow the Fergusons as they sit down with a new guest each week sparking curiosity and conversation. Known for his deep and meaningfuls on the Late, Late Show, the Scotsman was the perfect choice of host to pull information from interesting people such as astrophysicist Neil deGrasse Tyson and molecular scientist Daisy Robinton, spurring debates around topics such as sustainability and success.

When asked why they decided to move from advertising into a form of sponsored content, GANT global marketing officer Eleonore SÃ¤ll mentioned “We want to do content that people think is interesting, instead of a commercial that is interrupting what is interesting,"

The opportunity also proved interesting for Ferguson because it offered “the unique opportunity to go straight to the experts in any particular topic we were curious, or, let’s be honest, arguing about,” he said in a statement. “Something I would imagine most couples would be grateful for.”

Known for being the ultimate shirtmaker, GANT are one of many retailers who are fast discovering the need for new and interesting ways of getting their product infront of customers. Sponsored content and promotional programming isn’t a new thing. Infact, viewers are getting more and more used to less ads, and more products sneaking onto their screens without even – fully – noticing. True, here in the UK we need to have the "P" to warn us for the featured promotional content that is about to grace our screens, but online is a totally different ball game.

The Evolution of Douchebag Style

The six-episode series will appear in over 70 countries – ad free may I add – via YouTube and other digital venues, with the first episode debuting Monday, 9th of October which runs alongside GANT’s key message, "Never Stop Learning".

Watch the full trailer below: