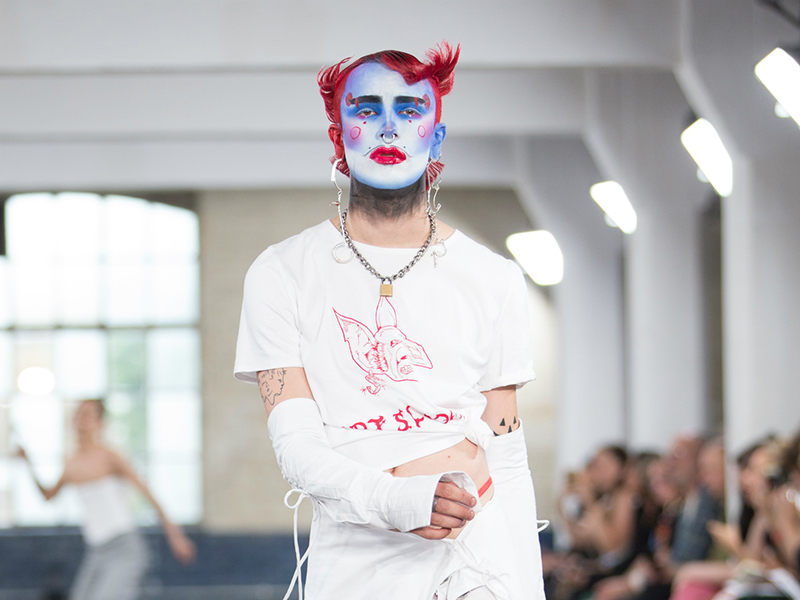 |This week, you need to focus on the beauty of cellulite, Pride 2017 and Judy Blame. You’re Welcome.

This week we’ve been talking about a new type of contraceptive, how the Blitz kids of the 1980s influences designer Charles Jeffrey LOVERBOY and paying respect to Anita Pallenberg, but what have we been reading? Here are the stories that have gotten the Fashion Fix Daily team talking.

Earning (and wearing) one’s stripes has not always been black and white. "The humble stripe has something of a checkered past. In his colorful and illuminating history of stripes, The Devil’s Cloth, Michel Pastoureau reveals the hidden history of this simple pattern."

Best Queer Books to Celebrate Pride 2017 "Whether you’re out celebrating on the streets or curled up at home enjoying the festivities from inside, Pride is here and it’s time to live it up! And what better way to celebrate the month of June than with the best of queer reads out just in time for Pride?"

Fashion as a safe space: between the party and the political at LFWM "Screaming teddy bears were what greeted you first from Liam Hodges’ clothes in his show on Friday, even brought to live as a kind of fashion mascot at the end of his S/S 18 offering. They functioned as a modern adaption of Edvard Munch’s €œScream€ the designer explained, encapsulating the constant stream of tumble and noise today’s youth has to face – while still trying to look cute. Which brings us right to the core theme explored by the strikingly young cast of designers showing at this season’s London Fashion Week Men’s, which ended yesterday: How to build your identity in a world that seems to be everything but steady."

ART SCHOOL SS18 "Queer Couture" Look 16 Al Ly Look 17 Kevin Cordo Our icons of queerness, our friends, loved ones and collaborators elevate onto the catwalk. Divine beings representing every beautiful corner of our world. Art Direction: @siobhancait Styling: @aikamoshita Choreographer: @leschild Make Up: @beccamua @maccosmeticsuk Hair: @jondefranc @bumbleandbumble Nails: @kimberley.nkosi Bespoke Jewellery: @amyrodriguezc Bespoke Shoes: @rokeratelier Thank you so much to @fashion_east @topman for this incredible opportunity and finally to @_lulukennedy @natasha_booth you have no idea how much you've changed our lives ¤ï¸

"If you don’t have it, make it" – Judy Blame "How did Judy Blame become a stalwart of London’s fashion scene? By being a creative genius, obv."

How YouTube is going from viral videos to original programming "YouTube, it’s fair to say was the original digital disruptor. A channel where we could watch an endless stream of footage and more recently watch things go viral, from beauty vloggers, to Beyoncé to James Cordon’s Carpool Karaoke. But now, with the launch of YouTube Red– a subscription service, the channel is moving into offering more original stories with an advertising component."

Op-Ed | How Small Will Beat Big and Save the Fashion Industry "The status quo spells certain death for design-driven brands unless they tap new technologies and Economies of Small, argues Lawrence Lenihan."

Why Chrissy Teigen Keeps Talking About Postpartum Depression "The headline for Chrissy Teigen’s Marie Claire July cover story reads, €œThe (Truly) Unfiltered Chrissy Teigen.€ Living up to her reputation for candidness, Teigen doesn’t shy away from commenting on her postpartum depression: €œEvery step I take feels a little shaky. It’s such a weird feeling that you wouldn’t know unless you have really bad anxiety€¦You feel like everyone is looking at you.€ She brings it up again later in the interview when discussing the possibility of expanding her family: €œMaybe I should be scared [of having PPD again], but I don’t know. It couldn’t be any worse than it was – could it?€