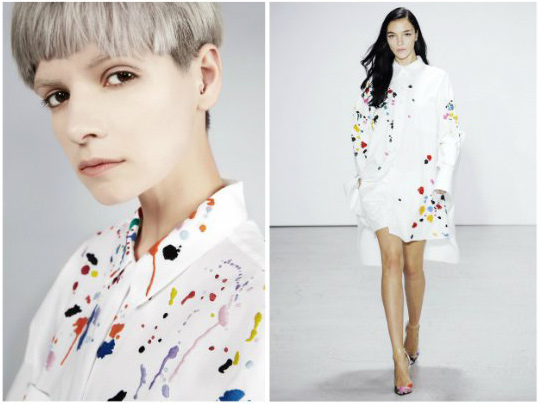 Big fashion houses and stores are ripping off independent brands – is there anything we can do about it?

Plagiarism has always been the fashion industry’s dirty little secret, but in recent years it’s been just as dirty as ever, yet not so secret any more, with social media making it far easier to call out creative thievery.

Recently there have been countless culprits thrust into the public sphere, from retail giants like Zara and Forever 21, to designers themselves and there are likely many more unreported or undiscovered cases. Ultimately social media platforms – in particular Instagram – have facilitated not only the calling out of the perpetrator, but the theft as well. T

hey have created a space tailor made for those responsible to be dragged for it and a place for intellectual theft to be presented to the world, while ironically it is this very medium that most likely led to the theft: visual based social media sites like Instagram, Pinterest and Tumblr have created a creative archive with endless amount of often un-credited inspiration ripe for the picking.

The biggest perpetrators of alleged theft have to be Forever 21 who, as it stands, have been sued 50 times since opening their doors for business. Just like Forever 21, Zara – another huge retail monster – have been accused by more than forty artists, ranging from indie brands to Vogue CFDA fashion fund winner Aurora James, and while they have never acknowledged their possible “inspiration”, they claim that they ‘modify’ designs rather than ‘copy’. While this makes it no easier for the creative who feels their work has been stolen, much of this is a part of the inevitable horror of capitalism: big business steamrolling the “little guy”.

It’s not just fast fashion that’s guilty though, major designers have also been accused: Gucci recently came under fire for accusations of plagiarism within their AW17 campaign from Central Saint Martin BA student Pierre-Louis Auvrey, who noted the similar aesthetics of their campaign to his own work; Roberto Cavalli has been on a pretty constant – and to be honest iconic – rampage against Michael Kors, saying that he is “the biggest copy designer in the world”; Balmain was accused of ripping off a white suit from a 1997 couture collection from Givenchy, at the time headed by Alexander McQueen; Christian Louboutin took YSL to court for incorporating his trademark red under-sole; even Jeremy Scott was accused of plagiarism by infamous surfboard and skateboard artist Jimbo Phillips, when Scott’s A/W2013 collection trotted down the runway full of dripping colourful faces that bore a striking resemblance to artist Jimbo and his father’s designs – unlike most cases however this one seemed to be handled pretty well, with the lawsuit being settled out of court and Scott issuing a public apology.

it's really similar
jeremy scott and jimbo phillips side to side pic.twitter.com/nKOnJVlwX3

But unfortunately, unlike Scott, most accusations won’t even be acknowledged by the big-time designers or design houses, leaving young or indie creatives with very little in the way of options, which can be not just financially detrimental to the fledgling business but also can take a toll on the well-being of creatives desperately working to establish themselves. Consider the case of up and coming brand Cimone, who are currently embroiled in their own accusation of plagiarism against fashion titan Oscar de le Renta.

Cimone accuses de le Renta in his SS18 show of directly “lifting” from their SS17 show, more specifically the pretty unique embroidered paint splatters which are strikingly similar to Cimone’s not just in technique but colour pattern and placement on the garments. While much of fashion is intrinsically tied to capitalism, we must still remember that these creative endeavours are many times much more than that: they are personal, they are the creatives’ blood, sweat and tears. Carli Pearson, creative director of Cimone, describes the alleged stolen design as stemming from her own deeply personal experience – something that she had nurtured and saved, waiting for the perfect time to release into the world. That is the significant factor at play here, these alleged thefts aren’t just legal indiscretions, but far more than that they are are cutting the life line of the next generation of great creatives.

Even from a business standpoint it’s short sighted: there is nothing to be gained in destroying the new generation before they even get a chance to establish themselves. 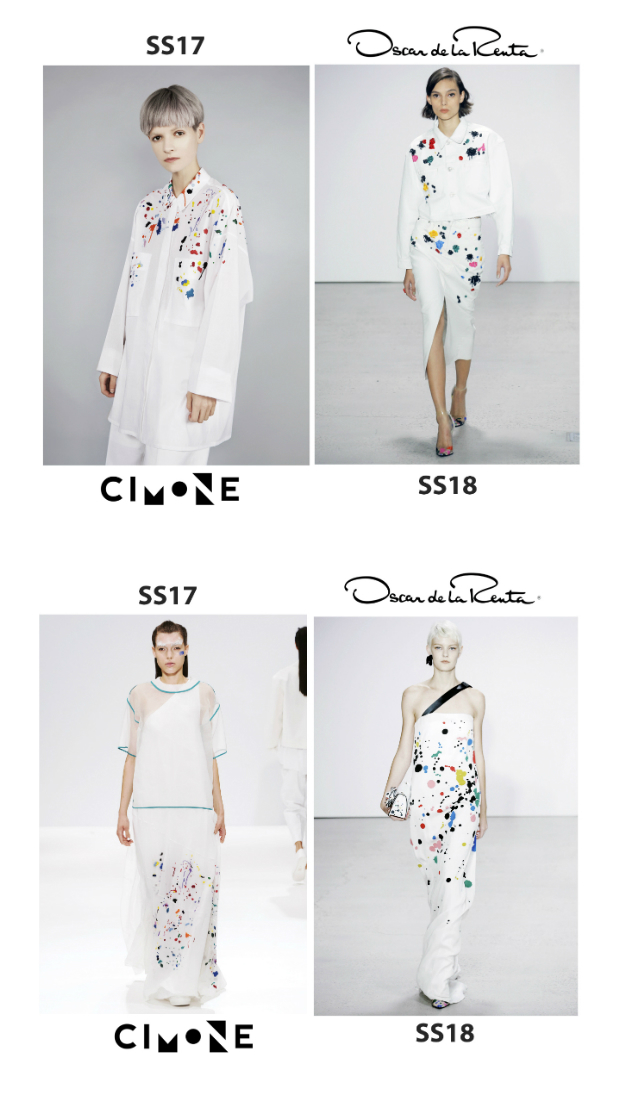 We can be thankful for tools like social media to give these creatives at least a place to tell their story and air their grievances, but while social media is useful it can also be a double-edged sword and can lead to allegations of plagiarism which are unfounded, as a fundamental question tends to go unanswered: how original was the initial creation?

We have to be aware that fashion can – due to trends, references and inspiration – coincidentally produce similar and even almost exact duplicates of ideas, and unfortunately, these speculative cases can over shadow plausible allegations of plagiarism like Cimone’s. But what is to be done with more convincing claims of creative thievery? It breaks my heart to say that unfortunately big business will always win over small. Consider the money hungry capitalist element of the fashion industry: it’s about cash, not creative originality or authenticity, and therefore the perpetrators don’t have a problem with such a petty thing as morality. And perhaps that’s the issue, we are looking for ethics in an unethical business.

Maybe rather than trying to win against the imposing giant of industry and power we change the game, we take fashion back to its creative, holistic and raw roots. But then how do we pay our bills? If someone figures out this answer, please let me know.