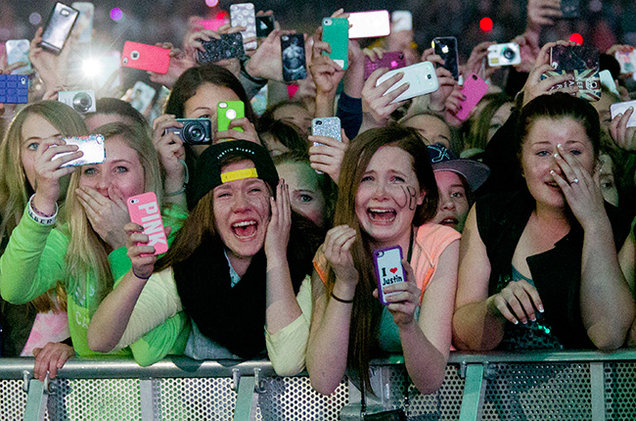 With the news that the police have foiled the possible kidnapping of Lana Del Ray, we are reminded that fandom isn’t always a safe place. Armed with a three-inch knife police arrested superfan and stalker Michael Hunt, 43 who was detained and eventually charged with "aggravated stalking & attempted kidnapping w/a weapon”. This incident is unfortunately one in a long line of shall we say… inappropriate fan moments. The world of the superfan is an intense one and while fandom can bring joy, it can also turn much darker. From invasions of privacy to extreme things like stalking, there are times when fandom went really “crazy”. Ultimately fandom can be split into two categories – the hysterical crowd and the obsessed individual – and within the pathology of fandom most extreme behaviour can be placed in either type.

The beginnings of the fanatical fan can be traced back to classical composers and musicians, and while creative individuals always had fans, we generally think of the Beatles as being the first instance of true fanaticism. The adoption of the term ‘Beatlemania’ was a nod to mania, not in the vernacular but rather the actual mental illness, and while that is problematic, it does indicate the extreme level of hysteria the Beatles received (in fact, the level of screaming fans was so bad the it forced the Beatles to stop performing live in 1966). The classic tropes of the superfan were really perfected within Beatlemania, from throwing underwear, fainting, crying, lusting, chasing the bands down the street and even crossing boundaries of personal privacy. This mass mania of the superfans is infamously linked to Beatlemania but was repeated with acts like the Bay City Rollers, Bros, East 17, Take That, to more recently Justin Bieber and One Direction.

Ultimately the hysterical crowd is just that: a hysterical crowd. Mass fanaticism creates more mass fanaticism. Fans work each other up to the ultimate frenzy of admiration for their idols, diving at the stage and even faking a faint to be pulled to the front and get a closer look at the object of their affection. The level of security required for fan control within pop concerts is more suited to a football game. There have been many instances of fans rioting or fighting, and sadly even fans being killed. Famously there was the case of four Indonesian fans being crushed to death at a concert for 90s British boyband A1, and sixteen people were killed in South Korea as fans desperately tried to get a better view of popular girl group 4minute.

OBSESSION the Obsessed Individual
Obsession can take many forms, from loyal Star Wars fans starting an actual church based on Jedi philosophy, to Wizard Rock which is actual genre of music inspired by Harry Potter with bands even taking their names from Harry Potter characters. While these are tame and pretty genuine expressions of fan love, there are some more intense and scary examples. One of my personal favourites is Carl McCoid, 39 who after a divorce decided it would be a good idea to spent £2,800 getting tattoos of Miley Cyrus all over his body – he even went so far as naming his daughter after Miss Cyrus. Sadly, for Carl, after being shown his tattoos Miley said they were ‘creepy’ and he is now vowed to get them removed. Poor guy.

Harry Potter is pretty synonymous with crazy fans, and one of the most intense fan encounters was when an adult fan offered to adopt Draco Malfoy actor Tom Felton. The fan offering to be Felton’s legal guardian (while he was still underage) stated that he eventually wanted to live in a home with him called, wait for it… Malfoy Manor. The really creepy part was that he actually produced the relevant documents required to adopt the star and for him to disown his own parents.

Modern fandom went through a really intense time with One Direction, one of the most disgusting examples was the fan that tweeted the members saying that if they did not follow her back she would break her dogs neck – the tweet was accompanied with a photo of her appearing to strangle her dog. And, while it turned out to not be a legitimate threat, the notion of how far some fans would go is disconcerting.

While One Direction fans are infamously intense, all boyband have their devotees. South Korean boyband 2pm member Taecyon received a pretty intense fan gift: a letter written in what was apparently the fans period blood. The letter read: “I dedicate to Taecyon my period blood letter. Ok Taecyon, you cannot live without me. Sprinkled with a few strands of my pubes (sic).” After speculation that the letter was fake, the girl then posted “proof” by revealing images of her bloody sanitary pad. In fact, intense line crossing in fandom is so bad in South Korea that there is even a term for it, ‘sasaeng’ fans are basically over-obsessives that are more than willing to cross normal fan boundaries and commit acts of criminal behaviour. Like all fandom encounters gone awry, the real dark side lies in the stalking behaviour. These fans consistently follow the idols’ cars which has resulted in many accidents. Their behaviour also includes multiple accounts of breaking into idols’ homes, tapping phones, stealing personal belongings, installing cameras in parking garages and even in one case, poisoning an idol who ended up needing his stomach pumped. One group, F.T Island, had their dorm broken into by sasaeng fans, who stole multiple belongings, damaged the property and even left their faeces on the floor. Another member of different group even found a sasaeng fan hiding in his bedroom – she was caught when he heard giggling from his closet.

One of the most famous fandom stalkers has to be John Hinkley who developed an obsession with Jodie Foster after watching Taxi Driver. Hinkley felt the best way to get Foster’s attention or send her his “lover offering’ would be to kill not one but two presidents of the United States. His first attempt at Jimmy Carter failed before it began as he was arrested before acting upon his idea, but his second attempt was a little more fruitful, taking shots at Ronald Reagan, one of which actually hit him indirectly.

So, what does this tell us of fandom? Well like most things it isn’t problematic in small doses, but really a problem may arise when things are taken too far and perspective is lost.