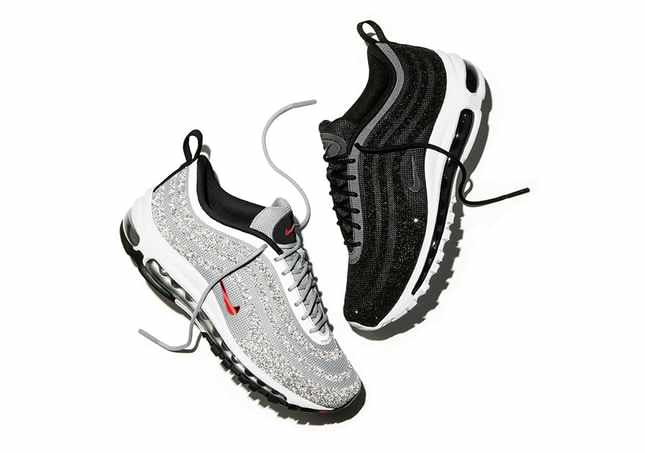 Nike have reached new heights of cult like status this year with the overinstagrammed pastel versions of the hipster sneaker.

Nike decided to celebrate their 20th anniversary with a bang. Or a bling as the case may be. The Brand decided to go that EXTRA mile by celebrating with a redesign that even the likes of Maraiah Carey would appreciate – with a limited edition Swarovski fabric.

Originally modelled on Japanese high speed trains, Nike have created the unique Swarovski Crystal Fabric. Made with over 50,000 miniscule crystals embdeded in the fabric, in a very specific pattern, the trainers don’t come cheap but have been made to be somewhat affordable. The trainers will not only have the iconic cushioned sole, but will also glitter with every step you take, without looking overly bedazzled.

This isn’t the first time Swarovski and Nike have collaborated: in March, Nike released a similar Swarovski version of the black Air Max 97 after designers visited the Swarovski headquarters in Wattens, Austria.

The silver Air Max 97 LX Swarovski will be available for "cheaper" than the original £600 black pair at £325 on Sept. 7 available from select retailers.