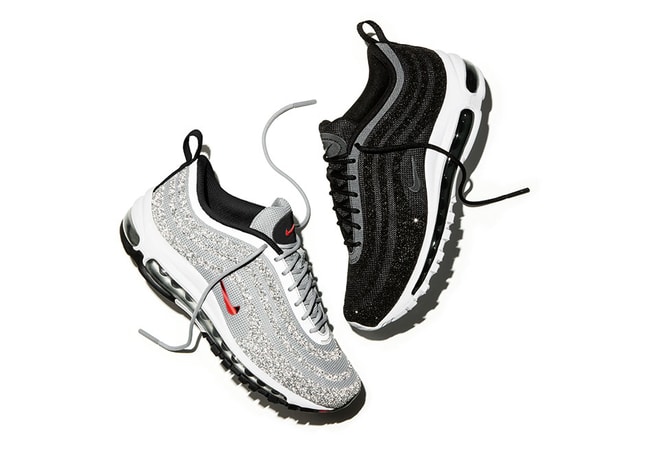 | It’s the Nike Air Max 97’s anniversary so Nike teamed up with Swarovski and designed the sparkliest silver and black trainers.

Can you believe it’s been two decades since Nike launched the iconic Air Max 97’s?! Reaching new heights of cult like status this year with the over-instagrammed pastel versions of the hipster sneak, Nike decided to celebrate their 20th anniversary with a bang. Or a bling as the case may be.

Being the birthday kick, Nike decided to go that EXTRA mile by celebrating with a redesign that even the likes of Mariah Carey would appreciate – with a limited edition Swarovski fabric.

Originally modelled on Japanese high speed trains, Nike created the unique Swarovski Crystal Fabric made with over 50,000 miniscule crystals embedded in the fabric (in a very specific pattern) these bad boys don’t come cheap but have been made to be somewhat affordable, guaranteeing trainers that will not only have the iconic cushioned sole, but also a shoe that will glitter with every step you take, without looking overly bedazzled.

This isn’t the first time Swarovski and Nike have collaborated: in March, Nike released a similar Swarovski version of the black Air Max 97 shoe after designers visited the Swarovski headquarters in Wattens, Austria. And if the silver is counterpart is as sexy as the black? Well, we’re all in for a treat!

A post shared by Shoelosophy Sneakers (@shoelosophysneakers) on May 27, 2017 at 1:25pm PDT

SS17 Trends You Can Inject Into Your Wardrobe Right Now

"We were looking to explore shine and durability in a new and innovative way, and we loved the juxtaposition of the Crystal Fabric’s tough sparkle to reinvent an already iconic shoe," Marie Crow, the Material Design Director for NikeWomen sportswear, shared in the official press release.

The silver Air Max 97 LX Swarovski will be available for "cheaper" than the original £600 black pair at £325 on Sept. 7 available from select retailers.