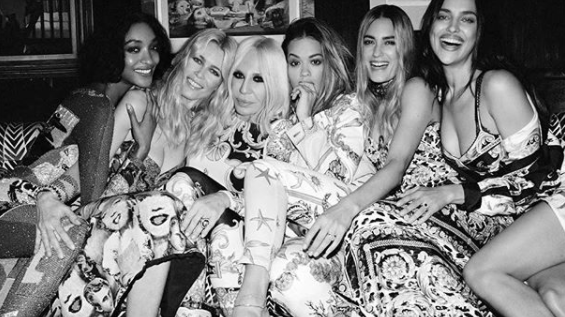 In an interview with The Economist, 1843 Magazine Italian fashion designer Donatella Versace said “Fur? I am out of that. I don’t want to kill animals to make fashion. It doesn’t feel right.”

The luxury brand has historically included lots of fur across its ranges, from a variety of species including mink and raccoon dog. Its autumn / winter 2017 collection included laser cut mink and fox coats. Versace joins top designers such as Calvin Klein, Hugo Boss, Armani, Stella McCartney, Ralph Lauren, Vivienne Westwood, Tommy Hilfiger and Gucci all of whom have banned fur from their collections.

“Versace is a massively influential luxury brand that symbolises excess and glamour, and so its decision to stop using fur shows that compassionate fashion has never been more on trend. Versace is following in the footsteps of fellow fashion giants Gucci and Michael Kors who have dropped fur in the last six months. Such influential brands turning their backs on cruel fur makes the few designers like Fendi and Burberry who are still peddling fur look increasingly out of touch and isolated.” – Claire Bass Executive Director of Humane Society International (HSI) UK

Versace’s announcement follows after 31 of Britain’s biggest stars, including Dame Judi Dench and Sir Andy Murray, wrote to UK Prime Minister Theresa May in support of the #FurFreeBritain campaign. Their letter urges her to introduce a UK ban on animal-fur imports. Fur farming has been illegal in the UK since 2000, but since then Britain has imported more than £650 million worth of fur from countries such as China and Poland, where animals are bred in appalling conditions on fur farms.

This move from one of fashions giants proves that fur is well and truely a fad of the past. Lets just hope the rest of the industry follows suit.

Unfortunately the government refuses to ban the sale of fur in the UK, you can read their full statement here.

All images Via Versace