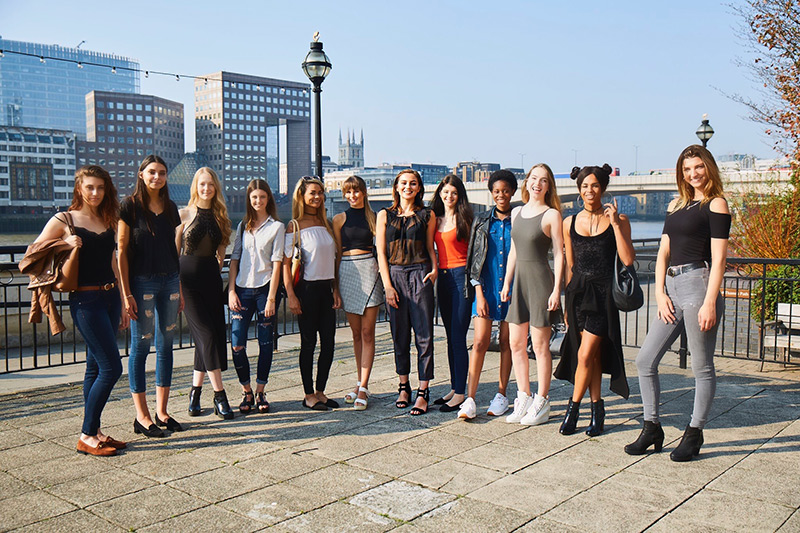 For those of you that don’t follow my Instagram/Twitter at @bntmsimone, I spent last night with the entire Britain’s Next Top Model cast, our fabulous producers, the Lifetime TV team and a huge collection of VIP guests at our amazing season launch party! We also got to finally view the first episode of the series at the same time as the general public and #BNTM even trended at number three on Twitter.

All-in-all an absolutely incredible evening but back to the episode! This year we started off the series with the judges selecting 12 contestant which was great to watch as a group because it was exciting when each of us popped up on screen for the first time however this also meant I had to watch a short segment of my audition tape again – mortifying! I thought this was a really fun way to introduce us to the audience and a great start to the series.

Our first challenge – closing the Cosmopolitan Fashfest show and walking in front of 1000 – was really fun to watch back although I remember it being a really hot and really long day. This was also the first day I got to talk to the other contestants and you can read my first impressions of them all here.

For me, the catwalk went very smoothly although I can’t say the same for half of the group! I knew I was in good standing for this weeks elimination already and I felt as though I’d impressed the hugely intimidating Hilary Alexander and Paul Sculfor – who I can honestly say is just as handsome in real life, if not more so – but I was still nervous for what’s the week had in store for us! We arrived in east London and learnt we’d be shooting our promotional images and honestly the pressure was immense because I was well aware that whatever picture I took that day would follow me around for years!

It was also the first time we’d all shot together and although we didn’t get to see each other actually shoot you could tell how each contestant had thought it had gone by their reaction once they were back in the holding room. NOT TO MENTION – the photographer in question was Nicky Johnston who is notoriously full of RAGE in eliminations towards any girl that doesn’t perform on set… take that and add the flawless Abbey Clancey directing you and I’d say anyone would be pretty nervous to be standing around half naked in swimwear trying to give their fiercest looks!

So by this point we’d had a challenge, had a photo shoot… as a fan of the Next Top Model franchise I knew the pattern well enough – an elimination would be next! Sure enough, we got the model mail and the next day headed off to the chopping block!

Watching the judges critiques was perhaps the hardest part of the show for all the girls, but throughout the show I learnt you need a thick skin and that absolutely helped with the negative aspect of my feedback. However, I was thrilled with the positive feedback from the judges I hadn’t heard previously and can honestly say that getting the stamp of approval then is the best feeling in the world.

Anyone that’s watching the episode already knows this weeks outcome so I won’t spoil it for those that haven’t had the chance to watch their recorded episode! However, I’m still here and still in the running! I think next week will be a lot more exciting to watch as we’ve all been introduced now and the real competition starts!!

Personally, I don’t think I’ll ever get used to watching myself on TV but it was a fantastic start to a great series and I’m so excited to relive the ups the downs and watch all the crazy drama that could only come from putting twelve competing girls in an apartment and letting them run riot!