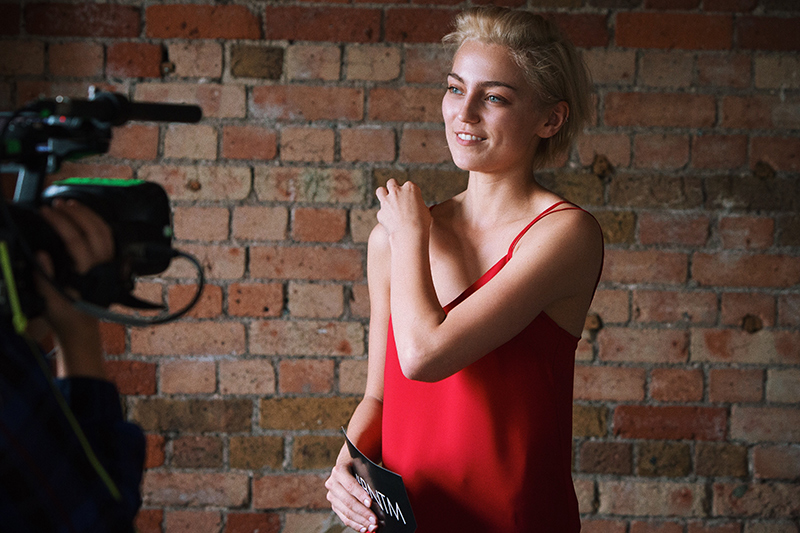 Hey guys! I’m checking in from New York, I’m here for Tartan Week and I’m having the most amazing time! However not being able to watch this weeks episode of Britain’s Next Top Model along with everyone was such a struggle. It’s still absolutely crazy to me that BNTM has been on television for a month now. The most exciting part is that a lot of fans are starting to interact with me through social media, especially last night because I featured a little more on the episode on screen.

So let’s get to it! The pressure was certainly on with our Colgate ‘Screen Test Challenge’, as we had nowhere to hide and no make up to hide behind – something I actually quite enjoyed, I don’t really wear makeup in the daytime and was starting to feel like I needed to be done up from filming each day and that’s not really my aesthetic. Not everyone was ready for their close up but for me it was a real opportunity to shine. I was really nervous but I ended up really enjoying the challenge – even when the TelePrompTer cut out! I really hoped I was going to win this challenge but Tallulah impressed the brand and won – fair play!

When we got home we had been left and amazing array of luxury Vodka so we got to have a small party – regardless of what filmed for the show this was actually really good fun as we were finally allowed to listen to some music! Getting to blow off some steam with the girls was amazing but eventually it went a little too far. There were some girls that were just taking it to the next level and when you are in a tight living space it can easily ruin the atmosphere.

The next day after a few coffees to ease the aching heads we were back in gear and headed to DSTRKT – a nightclub in central London and found out not only would we be working in pairs but we would be designing our entire shoot, down to the makeup and even telling Nicky how to shoot us without any direction…slightly terrifying to be honest!

I thought Chloe and Olivia were given a hard time this episode because their final image was gorgeous but they were apparently lacklustre on set. Ironically, after Jen and Tallulah getting…um… closer the night before they didn’t have much of a connection on set.

I loved working with Bianca and getting to design our own shoot because it meant we could finally do something a little different! We had been shooting loads of commercial images but this was our chance to do something more creative! I was so proud of what we did and ended up winning picture of the week!! (At last!)

I was sad to see Victoria go as she and I got so close over the competition- we actually live together now! Frustratingly I actually think she would have SLAAAYED next weeks shoot – I’m so excited to watch the next episode already and can’t believe we have to wait another week!!