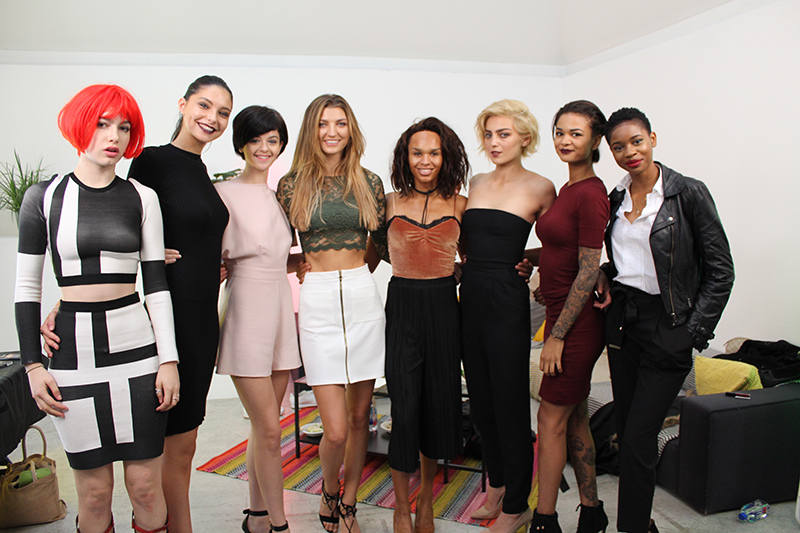 FFD’s Weekly Fashion Round Up

Another amazing episode of Britain’s Next Top Model! I really enjoyed watching this one – even though it was a bit of an emotional rollercoaster!

Right so let’s get started, the episode started with everyone reacting to Victoria’s elimination. For me, I was heartbroken! Victoria is my girl, we’d been sharing a room in the competition and you can see my jaw drop when she doesn’t walk back through that door. Chloe is the elimination assassin of the competition, I swear the girl has nine lives.

We had to keep moving forward though, our model mail arrived hinting to doing something with heights. Now I am TERRIBLE with heights and what they didn’t show is that all the girls thought we would be bungee jumping (sounds ridiculous now I know!) and I was CRYING MY EYES OUT! However, when we arrived on set the next day we found out we would be doing our photo shoot with Glen Burrows for the Smooth Skin IPL on a trampoline and this was a little more up my alley.

As we travelled to Essex for the shoot, Eleanor’s eye kept hurting her and she was rushed to A&E – something none of us saw (pun intended) coming. With a man down we had to persevere and I think the majority of the girls really enjoyed this shoot, a mix of the fun and adrenaline. Personally, I thought it had gone really well and I left feeling quite confident. Especially after having Nicky tell me "I’m tiring of your fabulousness", I have to say I was so pleased that my ballet training when I was younger was a huge asset. I would recommend ballet to anyone trying to get into the industry as it helps with posture and graceful movements along with being a great way to keep fit.

When we arrived home Eleanor came to tell us about her eye – it was way more serious that we had anticipated and she was actually days away from losing her eyesight. Unfortunately she had to make the choice to leave the completion due to this which just felt really unfair because she’d worked so hard and achieved so much! She really was a ray of sunshine about the house. LOVE YOU ELEANOR!

The next day we were back in the thick of it, heading off to an e-commerce shoot with Millie Mackintosh. This was so much fun as we had to race to style ourselves and I was OBSESSED with my look. I took my inspiration from studio 54 and felt so confident and comfortable in my outfit which showed during the challenge. I didn’t win due to my walk being too strong… hardly a criticism in my eyes! I learnt to walk from watching hours of footage from New York Fashion Week and you know those girls tear the runway up!

I was thrilled Alannah had won as she hadn’t performed as well in the photo shoot and it meant I’d have my girl with me for another week!

I wasn’t worried heading into elimination but the nerves still hit me, not quite as much as they affected Tallulah Bluebell who hated her picture. I honestly felt bad for her because in this competition it can all be over with one bad shoot.

After some lovely words from the judges, I was safe for another week and headed home with the other girls. In those moments of heading home to our house in Hackney you’re almost euphoric and I almost couldn’t think past the fact that Alannah, Bianca and I were all still in the running but of course back at eliminations the judges were still deliberating.

I actually have A LOT of respect for Tallulah standing her ground because the judges are so intimidating it’s often hard to find your voice. Despite their criticism, I loved Talulah’s image and wish her all the best!

With two girls down in one week the house felt very empty and I think we were all aware of the completion heating up, hope you’re as excited for next weeks episode as I am!