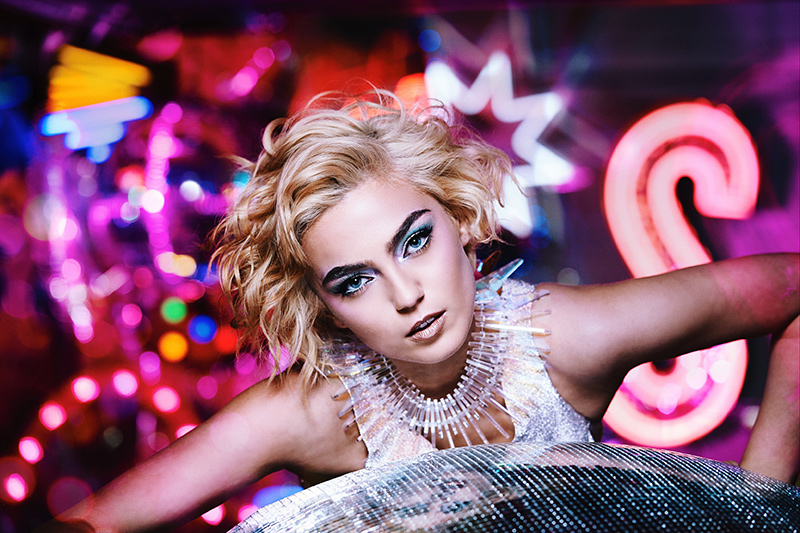 Navigating SS17 Style When all you Wanna do is Wear Black

I can’t believe how far into the series we are, there’s only a few weeks left! When I watched that last episode I really felt like the show had a much more serious tone to it, which was exactly how filming felt after Bianca left! This weeks episode actually started with the aftermath of Bianca’s elimination, honestly I’d been having so much fun I almost forgot it was a competition.

That night we were thrown back into it as we were awoken by alarms in our flat with a model mail hinting to us we’d be participating in a night shoot. We arrived on location and were prepped to shoot in the amazing Gods Own Junkyard – a beautiful location I’d recommend to everyone! It been used for editorials in a variety of fashion magazines, including Vogue so you’d definitely recognise it . A representative for sleek told us we would be shooting for the brand, one of the shows biggest sponsors, their new collection was called ‘distorted dreams’ and it made sense why we were up in the middle of the night at last!

I was really excited for this shoot but by the time I got on it was 4:30am and I was delirious! It had been frustrating to watch the first few girls go on while we waited in the hold room getting far more tired, even stopping for an hours dinner break before I was allowed on set! I gave it my best though but it did take me far longer to get into the rhythm of the shoot.

By the time we got home it was around 6:45am and I was grateful we had our only day off during filming the next day. It went slowly as the only options in the flat were to nap or sit around chatting but it was lovely to finally forget about the increasing pressure, at least for a few hours. We received our next model mail that evening and I knew straight away we’d be shooting underwater!

I was so excited and was thrilled to be second in the water. I’d started to doubt my sleek image and knew I could make it up today. Getting under the water was challenging, as was staying low but I managed to pull it out of the bag! This was actually my favourite shoot to do from the entire series because I loved the adrenaline rush I got after. This was a really memorable day for me as I’d had so much fun!

Eliminations rolled around again and before we knew it we were back in that nerve-wracking room! The set up was slightly different this time, evaluating our work with the judges was incredibly nerve wracking and really threw my confidence. In hindsight I wish I’d stuck up for my Sleek image a little more because I absolutely adore it now but I didn’t was to argue with the judges at the time. Luckily they loved my underwater image, with guest judge Toby Huntington-Whitely even saying it was his favourite to me on the day! I absolutely loved it too and even through I was placed in the bottom two this time I was confident I’d stay and be on the flight to Cape Verde the next day.

I scraped through and managed to bag that plane ticket which was SO exciting!! I’m really looking forward to watching next weeks episode to remind me of all the memories we had abroad!

Don’t forget to watch next Thursday on lifetime!