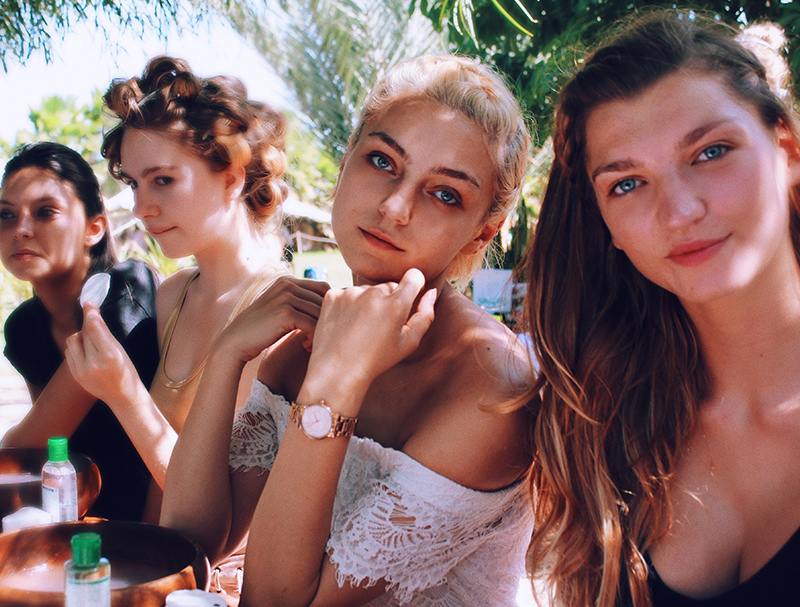 Whoaaaa guys! Who saw that coming?? I’m no longer in the running to become Britain’s Next Top Model but what an incredible experience, right?

It was actually pretty nice to watch last nights episode and similarly to when I was actually eliminated in person, it was a bit of a weight off my shoulders! I was absolutely overwhelmed by the kindness and support I received over social media last night, I felt like I’d left the show on such a high note as well!

Let’s get into the episode then shall we? We arrived to Cape Verde late at night after a 6 hour flight from Manchester…and after a 3 hour coach journey from London… We were absolutely knackered! The hotel was gorgeous and they’d put on a special welcome ceremony just for us which was so exciting! Our villa was dreamy – ESPECIALLY because Alannah and I had claimed the master bedroom which came complete with en suite and balcony – yaaaas!

Our first day there was A LOT of fun, we got driven to a beach and discovered we had a fun day of jet skiing and chilling out, which was a nice recovery after traveling. But before all the fun got started we had to film my absolute, least favourite "scene" of the entire series! The five of us running across the beach in our bikinis, I was so embarrassed to be ‘bay-watching’ ahaha! We then got to have turns on the Jet Ski, although we had a driver that repeatedly ignored my screams of "faster!"

After such a fun day of hanging out with the cast and crew we returned back to the villa and received a model mail – catwalk! I was excited, I adore doing shows. However, there was a twist (shock!), we would have to dance with a partner half way through the catwalk. I genuinely wasn’t that phased by this as I’d danced throughout my childhood and teens. This definitely paid off as the runway went so well, as did the dance section. My girl Alannah took home the prize and after watching the footage back I can totally see why, she’s an absolutely 10/10 on the runway!

I was kind of annoyed they didn’t show that during her shopping spree, Alannah actually got me a lovely bikini! They’re showing her in a very competitive light and not showing much of her fabulous, fun personally! We got so close during the Cape Verde trip and she was definitely there for me when I needed her the next day.

I was thrilled to be shooting in the botanical gardens the next day as I love being surrounded by nature but the day wasn’t to go as smoothly as I’d hoped! As soon as I arrived on set I completely froze up which frustrated me hugely as I hadn’t had a panic attack the entire series, despite suffering from them my entire life. I’m normally quite good at dealing with them however I the pressure of filming the show really prevented me from pushing the feeling down and while I was surrounded by the crew on set and I felt so trapped – I just wanted it to be over.

Film4 Celebrates ‘PHENOMENAL’ Women with a Month of Female-led Movies

A part of me feels as though if I’d asked to talk to Nicky aside as Jennifer had done during the Fiji shoot that would have helped me because it would have made good TV but I stayed true to myself and finished the job professionally as I would in the real world. It was no good though. I knew I was the next to go and although I initially tried to kid myself that it would be fine I could tell by the way the judges spoke to me at elimination they’d already decided. That was the same moment I decided to bow out and just appreciate the competition for the wonderful experience it had been!

There will be a lot more coming from me so don’t you worry! I’ll also be back here on FFD next week to recap the next episode. I may have been out the competition but I was still in Cape Verde (gin and tonic firmly in hand) hearing all the BTS gossip!