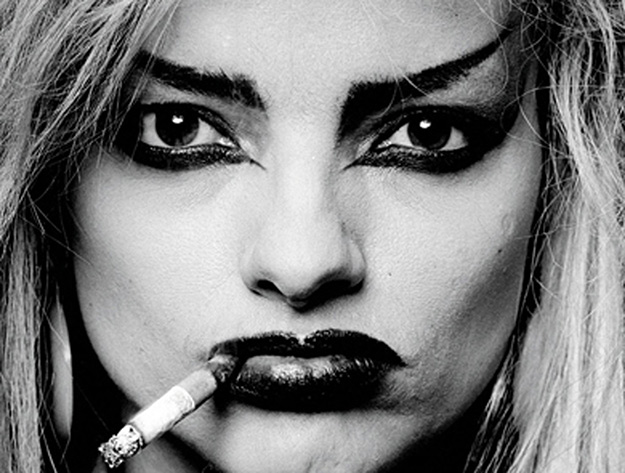 Getting To Know Ãr JÃ³hannsdÃ³ttir, The Knitwear Designer Making Waves

When I think of the word ‘icon’, Nina Hagen is always one of the first people who comes to mind. She was crazy, sexy, a constant sartorial risk taker, and always truly authentic, which tends to be a common feature in the really stylish: it seeps out of their pores, infiltrating their stylistic expression.

And, like Nina’s personality, her aesthetic was a little punk, and little crazy and at times a little intense. Now I’m aware that some people reading this might not be super familiar with Nina, but I encourage you to watch as much as you can about her and, to be honest, you have definitely seen photos of her already on Tumblr, Instagram or Pinterest.

For those who have never heard of Nina Hagen, a little introduction – born in 1955 in what was then East Berlin, she actually began her career at a young age, as an actress. Although referred to as the Godmother of Punk, she is technically also an opera prodigy which informs her infamously operatic style of singing.

While she released some music in East Germany, it wasn’t until she made the move to West Germany that she really started her music career, forming the Nina Hagen band. Known for her very original theatrical vocals, the Nina Hagen band was short lived, releasing just two albums, in turn leading Nina to go solo. But while her music was popular, it was her infamous outfits, makeup, hairstyles and TV show appearances that really made her a star.

As well as opera, animal rights and UFOs, she is also extremely open about her spiritual beliefs and in 1999 released the devotional album Om Namah Shivay, a compilation of mantras and Hindu prayers adapted into song. Nina was a chameleon, never shying away from changing her look. She was that perfect mix of individualist and sexy bad bitch. While Nina’s looks were constantly changing, there were always some key elements we can examine to understand her style.

One of the reasons I feel Nina’s images still pop up everywhere on the internet is due to her makeup. While very beautiful, you can tell that beauty was not what she was striving for with her makeup.

Just like her music and her personality, her makeup was intense and in your face. There is no subtlety in the world of the Godmother of Punk. One of the really distinct things about Nina’s makeup was that everything was pulled up; her eyebrows were often shaved at the ends and drawn in upwards, her eye makeup following at the same angle, and with extreme blusher contouring her cheeks she looked snatched and fierce.

Never one to stick with the same looks, her makeup was always changing. In some of her most famous images she’s sporting just a red lip and dark eyes, and even while that may seem a little plain, wore it with boldness and intensity. Everything was bold: bold brows, bold cheeks, bold eyes and bold lips. She was also a massive fan of colour, and lots of it; from bright pink blusher/contour, to blue and purple lipstick, to pretty much any colour eyeshadow you could think of.

Nina was also a fan of heavy black eyeliner, whether she was creating a winged eye, or some crazy avant-garde look, reminiscent of another alternative icon Siouxsie Sioux with her colourful eyeshadow and bold, geometric lined eyes and eyebrows.

Nina’s look was Punk before Punk, New Romantic before New Romantic, New Wave before New Wave, and Riot Grrrl before Riot Grrrl. Her hair was a magical mass of constantly changing colour and styles.

From her iconic shaved head to her high ponytails, she was truly ahead of the curve. I mean if you like colourful hair then my girl Nina had you covered. While in her later years she favoured a natural, dark mane, in her youth she rocked practically ever hair colour possible, from super short red crop to blue and purple pastel dream.

My personal favourite looks are her giant ponytail of bright mustard yellow weave, and her crazy pink barnet. Hair was definitely an intrinsic part of her whole aesthetic, one of her most famous and popular looks being a pastel pink messy ponytail, fringe tied up with a pastel blue scarf and paired with bright pink cheeks, eyeshadow lips and eyebrows.

Seriously was she the first person to ever rock a colourful eyebrow? I don’t even know where she found blue lipstick and all those hair dye colours that we take for granted now, but whatever she had to do to get it, she is definitely one of the true originators of many contemporary trends. I mean, fuck mermaid hair; get some Nina Hagen hairs.

Sartorial Subversion a.k.a Her Clothes

It’s actually a little hard to talk about her ‘look’ because it was always evolving and changing. A fashion shapeshifter but always distinctively Nina, whether wearing a tutu or a catsuit, she towed the line between crazy and sexy.

Sometimes the real punk in her would come out and she would be suited and booted in her punk finest, and at times she would appear dark and gothic, but she was always sexy. She could be covered in leather or animal print with crazy accessories like real dummy earrings or thigh high boots, or other times almost childlike, perhaps even with some clown realness.

Bright and garish in clashing colours or trashy and flirty, her style was enticing, if not a little neurotic. Her colour palette ranged from black, and lots of it, to all the colours; fuschia pink, reds and bright greens, yellow and plenty of pastels. These colourful looks were always feminine, but they did have had a touch of the macabre to them, perhaps influenced by her escaping from the grey communist bloc of East Germany and embracing the bright, over the top look of western consumerism, or perhaps it was just her punk identity spilling. Regardless, like most innovative and original dressers, Nina’s clothes were not just mere dressing, but rather served as a means to express her character.