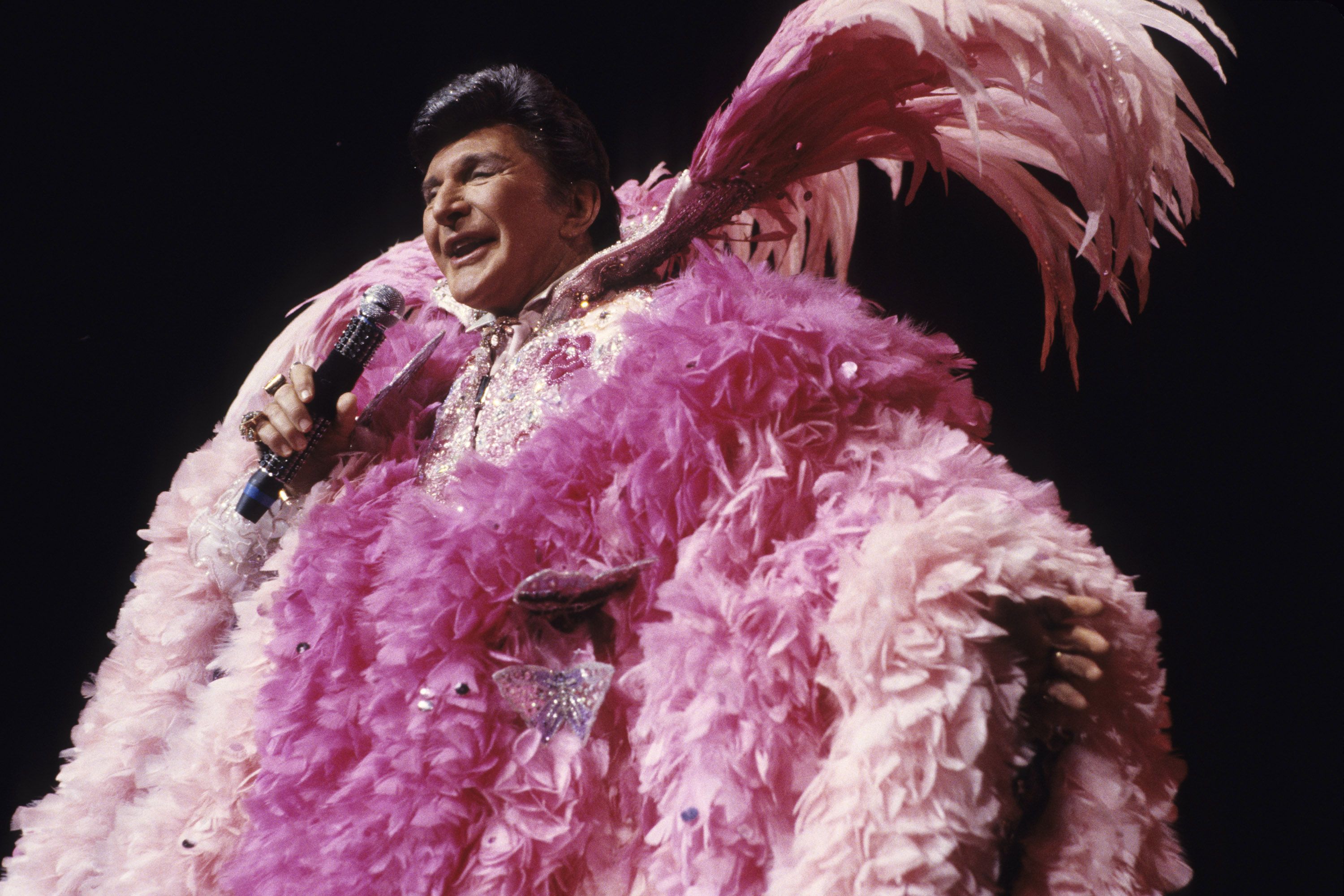 Born to working class immigrant parents, Liberace was the highest-paid entertainer on earth in his heyday. A child prodigy and piano virtuoso who funded his excessive lifestyle through music, television, cinema and commercial endorsements, ‘Mr Showmanship’ embodied flamboyance and bold style, proclaiming himself a ‘one-man Disneyland’.

There are definitely some words that come to mind when you mention Liberace -flamboyant, camp, gaudy and extravagant are probably some of them – and while all these things are wonderfully true, they fall sort of defining ‘Mr Showmanship’, as he was known. Liberace took materialistic glamour to such an extreme level that he makes The Queen and Elizabeth Taylor look like minimalists. Before these types of glamorous celebrities existed, no-one outside of royalty was so gilded in gold. I mean, his symbol was a candelabra! Someone described his style of interior decoration as ‘shrines in his own cult’ and he even opened a museum of himself. He made an old pageant queen look underdressed. Seriously, you think drag queens wear a lot of sparkly things? They have nothing on Liberace. Some of his costumes weighed up to 200 pounds. He was so proud of his outfits he often invited his audiences to touch his clothes so they could really appreciate them, making remarks like, "well, look me over, I don’t wear these to go unnoticed." [image courtesy of LAist] 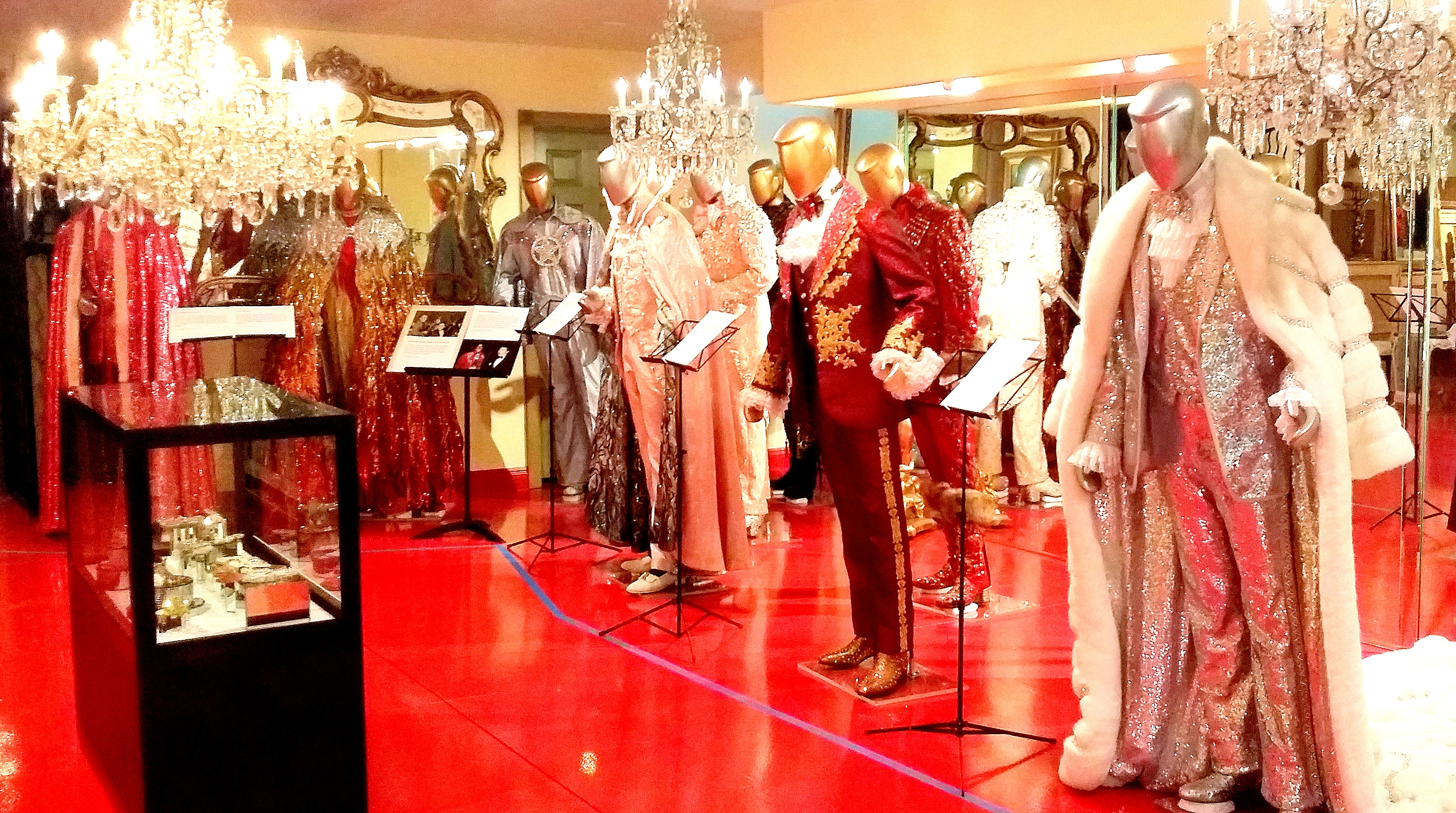 This man loved to rock a cape. I know what you’re thinking – that’s a bit Dracula of him – but Liberace’s capes were more of a razzle-dazzle affair; from his mink cape that weighed over a 150 pounds, to his pink extravagancy made entirely from ostrich feather, to the flame costume cape that consisted of small mirrors painstakingly fixed onto a floor length ombré metallic fabric cape with over 600 lights attached. This man was literally cape crazy. The capes were works of art in their own right, dripping with jewels, sequins and fur, and all made from luxurious fabric with frills and feathers, collars and trains. They were so large and in charge that apparently two of Liberace’s costume assistants had to be hospitalised due to hernias caused by carrying the excessively heavy costumes. It really takes a bold person to wear a cape at all, nobody wants to give off bad superhero vibes – and let’s face it, as proven by Madonna at the Brits in 2015, capes can be downright dangerous. [image courtesy The Liberace Foundation] 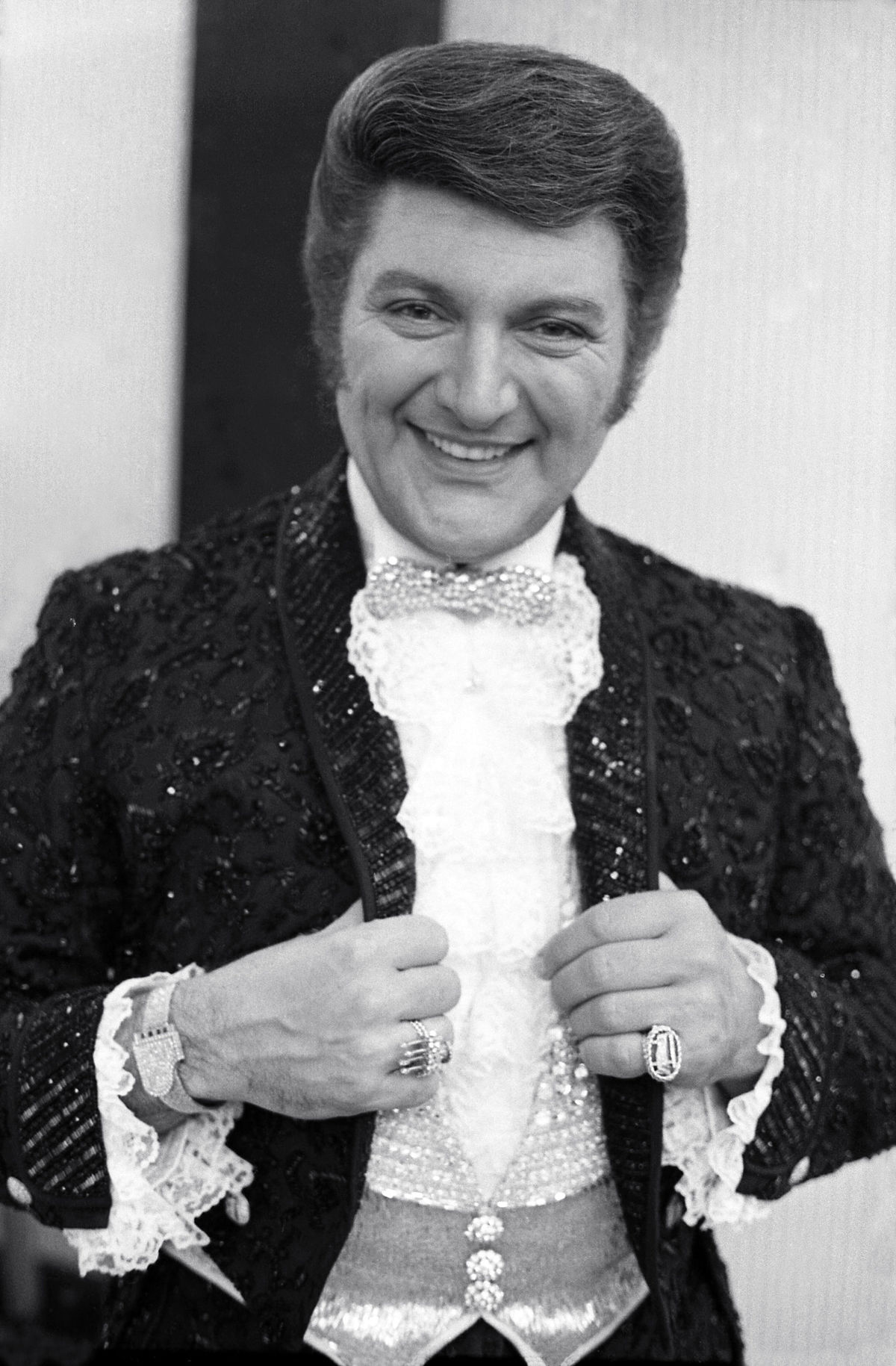 Even when wearing a suit, Liberace could not tone down his fabulousness, from his amazing tuxedo with sequined piano keys around the collar and lapels, to his suits made entirely from sequins, to his bolero jacket rhinestone cowboy moment. His suits were bespoke and custom made, with every inch being considered, even the lining, which Liberace preferred to have in scarlet – colour palette permitting of course! Overlooking his suits for his even more over-the-top pieces (hello, giant capes!) would be a mistake: they were not only incredible, but in terms of the language and culture of fashion a suit says a lot, particularly within men’s fashion. To take the super masculine – and at times oppressive – garment of the suit and cover it with glitter and sequins at a time when it was still illegal to be gay took some, for lack of a better term, balls. It was a really bold move by Liberace, so we shouldn’t forget it. Also in an amazing piece of added information, Liberace once said in a TV interview that his weight fluctuates so most of his suites come in three sizes: thin, fat and impossible. [image courtesy of Allan Warren] 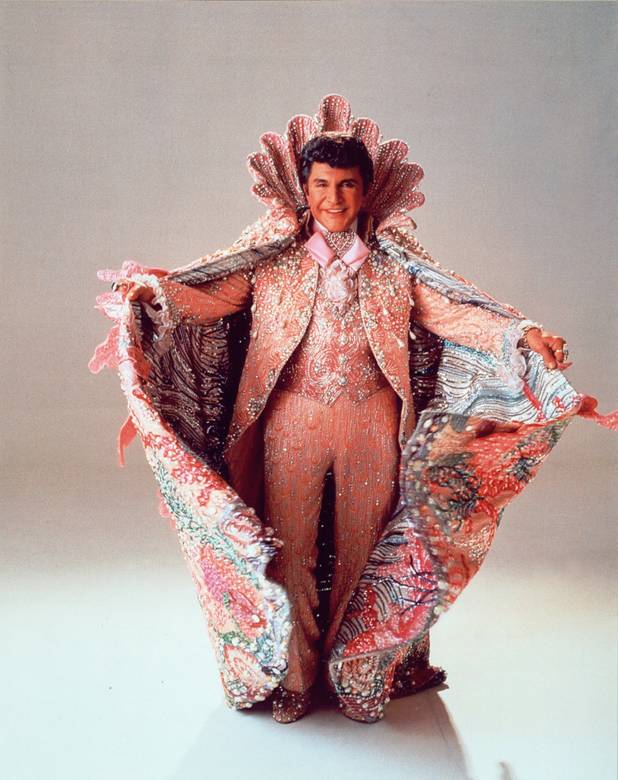 I’m sure we have all seen an episode of Drag Race where the queens are hurriedly sticking rhinestones on to an outfit to catch the light on stage, well, Liberace was the Queen, the God and the Pope of embellishment. Literally everything that came in contact with him was in some way sparkly, the piano magpie was completely fascinated with royalty and luxury, and this is probably where his obsession began. Coming from really humble beginnings, I think we all can empathise with just wanting to make the world around you a little more beautiful. One of my personal favourites of his embellishments was definitely his infamous King Neptune costume: a pink peach, three piece suit made to look like fish scales with accompanying cape, designed with a coral pattern all over it, and a spectacular collar in the shape of a shell. This outfit is truly one-of-a-kind and while it looks beautiful from any angle, I urge you to please Google a close up of this look – be prepared for your weave to be snatched. It is so rich with embellishment I actually don’t know how he was able to stand up in it. The amount of detailing, from sequins to real pearls, must have been incredibly heavy; some say it was almost 200 pounds. And if wearing a 200 pound outfit doesn’t show his commitment to embellishment, Liberace was known for his rhinestone piano and Roadster car, a mirrored piano with peacock feathers, a mirror-covered Rolls Royce Phantom with galloping horses on the side and glitter covered EVERYTHING. [image courtesy of Vegas Inc] [cover image courtesy of Yahoo Music]