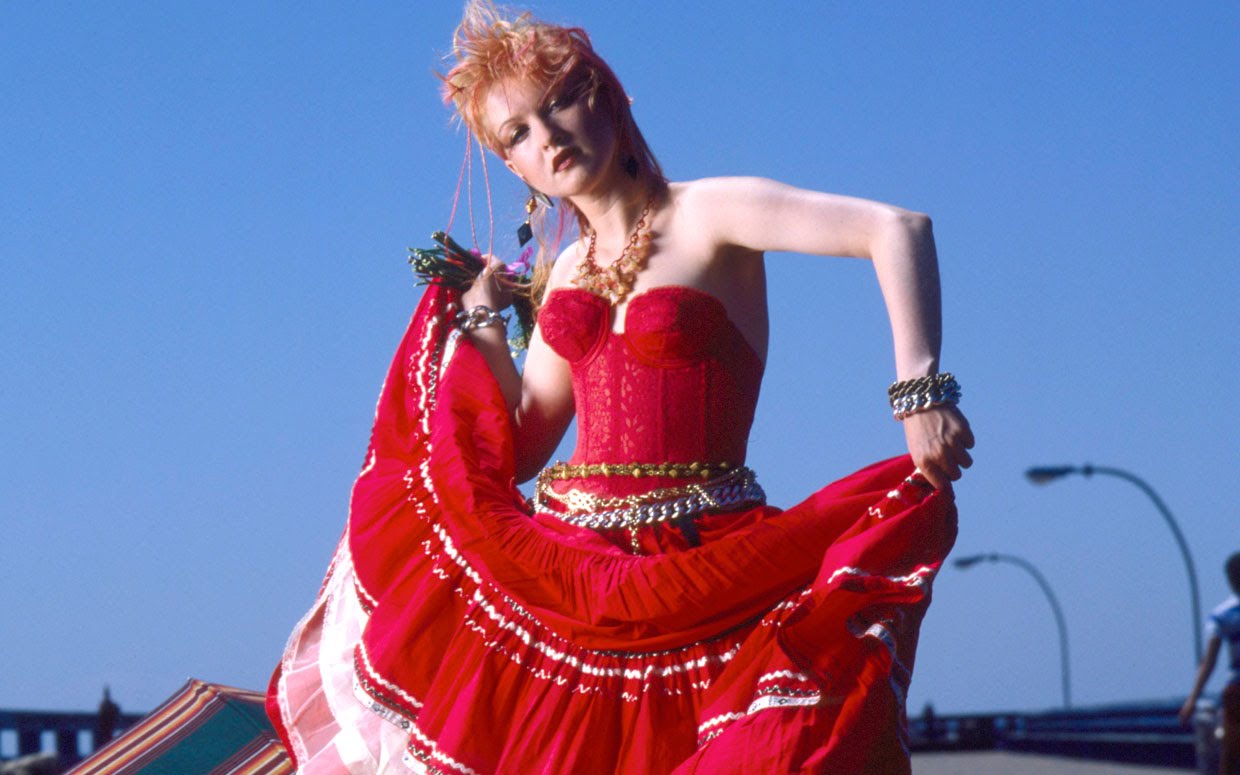 Anyone that knows me will tell you that I love an accessory – like I really LOVE an accessory – and my general rule of ‘more is more’ was hugely inspired by this icon: next in our alternative style series, Cyndi Lauper.

To be honest Cyndi Lauper has hugely informed my style over the years as she has many people’s. She was a stylistic force of nature, there was literally nobody like her. Her style was completely maximalist, with so much going on all the time. The famous quote from Coco Chanel was “Before you leave the house, look in the mirror and take one thing off”, well for Cyndi it had to be “put more stuff on”. The best part is she is still just as much of an icon now as she was at the beginning of her career, but since she has been around for a while this article will mainly focus on the eighties as that was definitely her peak style moment.

When taking about Cyndi Lauper one of the first things you will think of besides “Girls Just Want to Have Fun” would be her iconic coloured hair. She has sported pretty much every hair colour you can think of, and let’s remember while it’s not that unusual for people to have brightly coloured hair today, back in the eighties this was all really innovative. She was genuinely a hair colour trail blazer.

While she has sported most hair colours, she is probably most well-known for fiery colours with bright orange or red, and she did even add some yellow in to make her hair look like literal fire. It wasn’t just the hair colour that was unique, but her cut was too. Okay, so this may not be accurate, but I cannot recall anyone before Cyndi shaving half their hair like this. So, while the big bouffant hairspray masterpiece was pretty standard eighties, I think she was definitely one of the first to take that swept over look to the next level by shaving half of it off.

Like so many of these alternative style icons, so much of the style is in the attitude. That is the difference between looking like you are in a costume to looking chic. Cyndi Lauper is no exception to this rule, while her look was pretty out there and definitely had uniqueness to it, it was the eighties, the time of excess and out there fashion. And while many times people say that they look back on that decade and cringe (not me by the way, I love the eighties if you can’t tell) Cyndi really stands out as not so much following trends, but as an authentic style queen.

And it’s her attitude and authenticity that really shines through. Never does she look like she is wearing a dated eighties outfit or fancy dress, she always looks like herself, which believe it or not is much harder to do than you might think. So, while sure, you can take elements and inspiration from Cyndi, the overall message from this entire series on alternative style is definitely to be yourself (cheesy I know), because you know what? Whether they are informed enough to identify style, people can always spot inauthenticity, so just make sure you do you.

Like everything else about Cyndi her makeup was just as playful and always about colour, colour and more colour. Never afraid to rock a bold make up look, her style generally focused on three things: pigmented angular blush, a lip (although to be honest the eighties were a bad time for lip colours) and most importantly, a strong eye.

These eye looks were an array of colour combinations and at times she even played with geometric shapes, combining them in different formations on her eye which to be honest looks amazing, we should bring that back.

Okay so the part I have been waiting for, the accessories. Where to even start? Never one to limit herself to one type of accessory she was as varied in the type of accessory as she was excessive with her quantities. I also need to mention her placement of accessories, again, I don’t remember anyone before her that accessorised her ankle like Cyndi. And no, I don’t mean some sort of basic tiny anklet, she straight up had scarves, chains, or beads tied around her ankle. With Cyndi, more was definitely more and she piled on beads and bracelets. She would wear patterned tights, mis-matched socks, hats and the most iconic eighties sunglasses.

Cyndi definitely never saw an accessory she didn’t like. Her statement earrings were huge and generally mis-matched and she would create accessories out of anything, even clothes pegs. In that true eighties way, a look was really finessed by the strategic placement of something worn where it wasn’t intended (think Judd Nelson bandanna on his boot in the Breakfast Club”¦ which I totally didn’t wear for like 5 years) and Cyndi was a master of this, re-imagining her accessories to change up her looks.