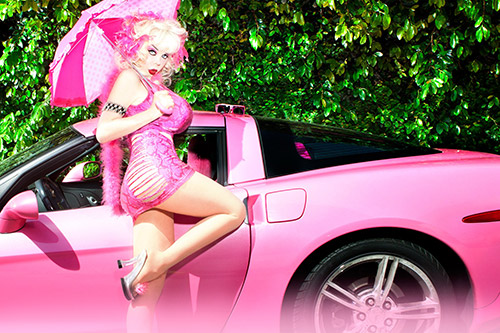 Why the Madonna/Whore Archetype€‹ is total Bullshit

Before Paris, before Kim – or before the whole Kardashian/Jenner clan – there was Angelyne. The mysterious LA staple made herself famous for being famous, through the subtle tactic of billboards. These billboards, which at one point numbered in the hundreds, have become as infamous as their subject matter. Described by John Waters as a “50s glamour girl gone berserk”, Angelyne is almost a movable tourist attraction, and it’s said that it’s good luck to spot her and her pink corvette. Not just famous for being famous, Angelyne really knows how to hustle, never giving photos for free and even selling her own merchandise from the trunk of her car.

When it comes to style with the infamous LA cult icon, generally less is more – well, when it comes to clothes at least. Her look is a bit playboy bunny, mixed with a sort of hooker Dolly Parton, with a whole load of Barbie realness. Already a cult figure and object of fascination and curiosity, you do really have to admire her dedication to self-promotion; she has been working that hustle for decades and really is one of the first modern celebrities to take self-branding to such an extreme level. There is a strange dichotomy with Angelyne, obsessed and passionate as she is with her self-promotion, but at the same time so secretive with even the most basic personal details about herself, rarely giving anything actually real about herself away – and I guess that’s the point, she wants the idea of Angelyne to be worshipped: the Angelyne that ultimately she has created. That’s probably the appeal of this self-created sex symbol: she is of course iconic, but also an enigma.

It’s impossible to discuss Angelyne without talking about her signature colour: PINK. She really took the mantra to ‘think pink’ to heart. Even her car is a custom shade of shade of pink that she has specially made: only the best when it comes to Angelyne and her pink. Pink to me will always be synonymous with Barbie and Angelyne. From her clothes, accessories, makeup, house and of course car, as she says, it’s always pink: “I’ve always liked it, it just gravitates towards me. Magenta is the concentrated color of pink diluted with white, so I think it has a really powerful energy to it. I read that pink is the most powerful vibrating color in the universe. Magenta-pink, specifically.”

One word to describe Angelyne’s clothes could definitely be small, her skin tight dresses really leave very little to the imagination and we love it. Showing off her infamous Angelyne body with those massive breasts and tiny waist, Angelyne knows that her brand is everything and will never be seen in jeans and a t-shirt. The Angelyne look is always fully realised sex kitten, and if she gets a bit chilly in that tiny dress then she can just pop a little cropped fur jacket on top. From leopard print to latex in her signature pink, the dresses will always have one thing in common: they are as tight as they are tiny.

I briefly mentioned her signature corvette earlier but this can’t be an article about Angelyne without at least giving the car its own section: that is how important the car is to her brand. Exclusively a Corvette and exclusively pink (of course over the years the Corvette has been upgraded many times and she is probably on her tenth model), Angelyne has have earned herself a place as a major LA tourist attraction; it’s said that she generally drives around a hundred miles a day. Though it’s not really clear when she began driving around constantly, we do know that in 1997 she launched a website offering tours around Sunset Boulevard and Hollywood, which I guess works well since who knows LA better than Angelyne? Spotting the sometimes illusive icon is almost like a competitive sport, and if you are lucky enough to spot her you can pay get photos with her, or even buy her merchandise, proving that her car is a one stop promotion machine for the Angelyne brand.

Along with pink, Angelyne is synonymous for her bleach blonde hair. Adding to her Barbie aesthetic, her blonde hair, like so many sex symbols before her has cemented her place as a bombshell. Like most things in the world of Angelyne, when she has something that works for her she sticks to it, and that includes her makeup. Not really changing much over the years, her signature look includes a bold eyeshadow, generally favouring pinks and purples with heavy black liquid eyeliner and a lined lip in either pink or red. Accessories wise her looks come straight out of Barbie’s closet, with her jewellery, hair and accessories resembling the doll’s – none more so than her shoes, which are pretty much always wedge heels that look uncharacteristically doll like; I swear my Barbies had the same shoes, but you know”¦ a bit smaller. Also a fan of opera gloves and cute little girlish handbags, her most infamous accessory has to be her fan, often used to cover a massive portion of her face. Some assume it’s to stop getting people from getting free photos (a big no-no in the world of Angelyne) and some think she’s actually developed a bit of a complex and wants to hide her face; either way it’s still iconic.