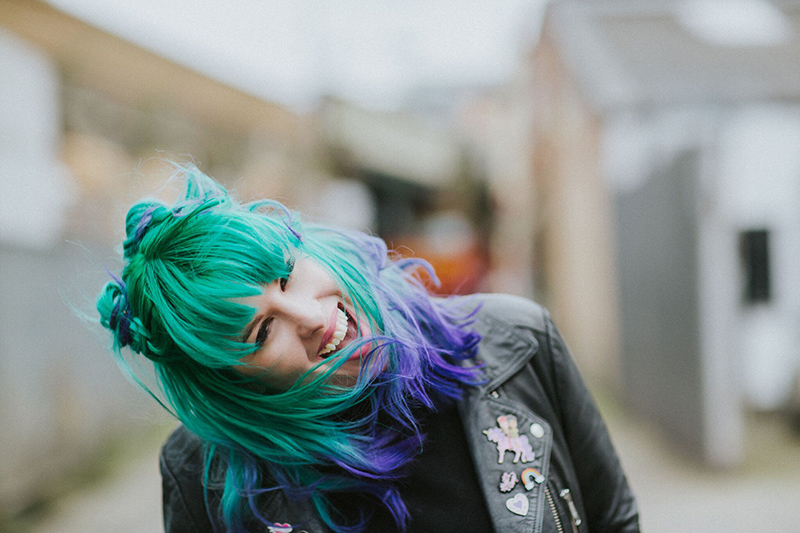 | Don’t let the wedding industry define your day, let YOU define your day. For this weeks day in the life, FFD catches up with Kat Williams, founder of legendary Rock n Roll Bride.

Known for her blue hair and individual approach to promoting quirky and inspirational weddings, there’s no one who truly celebrates the uniqueness of a couple more than Rock ‘n’ Roll bride. Working from home with her hubby, Gareth, there doesn’t need to be a ring on your finger for you to love the content she creates. Available online and in print since 2015, the bi-monthly Rock n Roll bride magazine is now one of the best-selling bridal titles in WHSmith, growing her almost cult like following by the day, so of course we wanted to find out more!

So, who’s the gal behind Rock n’ Roll bride? Tell us a little about yourself!
Hey! I’m Kat. I live in Reading with my husband Gareth and our Maine Coon kitties Henry and Rachel. I started my blog in 2007 when I was planning my own wedding – yes, you read that right, I’ve been blogging for TEN YEARS! The business grew slowly over that time, with me going full time at the start of 2011 and Gareth, my husband, coming on-board later that year.

Ahhh, a husband and wife duo, that makes sense! So when did you decide it was time to go into print?
It was around the same time Gareth came on, the business was growing steadily and we were invited to exhibit at a wedding fayre that October. The fayre offered us a free stand in exchange for promoting the event. However when it came to organising our stand we were a bit stumped about what to do – in 2011 many people still didn’t really understand what a blog was so instead of having awkward conversations or just having the website up on a screen, we came up with the idea of producing a 40 page ‘magazine’, a best of the blog type thing. When we announced online that we were going to be at this show and handing out a free ‘magazine’ people FREAKED OUT. I don’t think we’ve ever had such a reaction to a launch before, or since! Our readers were so excited that they’d be able to get a hard copy of the blog€¦ and they didn’t know or care that it was something we were literally cobbling together and getting printed at a local printers around the corner from our house!
Anyway, long story short, the mag was so popular that we decided to do a ‘best of the blog’ print edition every year. We did three in total, 2011, 2012 and the last one in 2013.

That is incredible! Who said print was dead, right? So where did you go from there?
It was super fun and people loved it but print production costs are SO HIGH, especially when you’re doing everything yourselves, you don’t have advertisers and you’re packing and shipping them all from your house. We had to charge £14.99 per copy and we weren’t actually really making any profit. So when the time rolled around for us to do the 2014 edition, and I was procrastinating on getting started, we knew that it had run its course. We put an announcement on the blog that we weren’t doing another magazine. A couple of hours after that post went live I had a phone call from a publishing company telling us they’d love to help us turn the magazine into a bi-monthly magazine AND get it in real life shops! Of course, we jumped at the chance. We went on to produce the first three issues with this publishing company with the first coming out in January 2015.

However, after the first three issues, we decided to cut ties with the publishing company. We weren’t thrilled with how the partnership was working out, a lot of their staff were leaving, and they didn’t seem to have the same goals as we did. So, we decided to go it alone again, however this time we had contacts with a distribution company and we were working with a more cost effective printer, this, coupled with the fact we now had advertising in the magazine, meant we were able to take it back in-house but still turn a profit!

And I am so pleased you did too, the magazine has never looked better! And at least you can do it on your own terms. So how does the production work exactly?
Yes, we are really pleased and can’t believe we are on issue 14 already. We still work from home and our team is small – we have a freelance design team of two based in the US, I produce the majority of the content and do all the ad sales and Gareth does deals with the printers and distribution. We have two freelance stylists and a photographer who we work with on our editorials and a bunch of awesome contributors who send us articles or create DIY content! I think the reason it works for us and the magazine is still growing in a declining market is because we keep our costs as low as we can. We never spend more than each issue is making. Would I like more help or fancy offices? Sure, but we’re not quite at that stage just yet.

What does a regular day in your life look like?
My days vary a lot depending on whether I’m in the office, at a wedding show, on a shoot, at meetings, going to events€¦ but a TYPICAL day would be me in the office. And as anyone who runs their own business from home will tell you, it’s not exciting or glamorous at all!

7.30am-8.30am – I wake up naturally between 7 and 8am. Henry will jump on the bed with us and flomp down with his belly in the air, demanding cuddles. I lie in bed for at least an hour on my phone, much to Gareth’s annoyance, checking social media and seeing if anything urgent has come in overnight over email.

8.30am-10am – Jump out of bed and head next door to our spare room where I work. I turn my computer on, move Henry out of the way of my screen, post that day’s blog post on social and then go downstairs and make a cup of tea.

10am-12pm – I don’t tend to eat first thing, I just crack on with emails or if I’m on a deadline for a sponsored post, write that before sending it off to the brand for approval. Depending on what time of the month it is I could get a lot of emails overnight from my design team (who are based in the US) about the next issue so I also might be proofing the next issue, sending over edits or approving layout options.

12pm-2pm – Gareth sleeps late but is usually up by now so I’ll go downstairs and make us breakfast or lunch. Most of the time it’s some form of eggs and beans or maybe some soup or a salad.

2pm-5pm – Writing blog posts (or editing the ones my sister, who works for us part time, has written) writing or editing magazine content, emailing with/ booking in advertisers, going through real wedding and photo shoot submissions, emails emails emails€¦

5pm-7pm – Gareth and I go to the gym on a Monday, Wednesday and Friday so it’s the perfect excuse to log off! He’s been going for years and me just over a year and although I don’t always love when that time of day comes around I always feel SO much better once we get there and start working out. We mostly do weight training with a short burst of cardio at the end.

Is The Runway Ready For Diversity?

7pm – Dinner time. I do all the cooking in our house and Gareth does all the clearing up. Fine by me!

8pm-10pm – I try my best not to go back to work in the evening but sometimes, of course, you have to. If not I veg out in front of Netflix, cuddling with Rachel on the sofa. Henry likes his snuggles during the day, Rachel likes them in the evening!

10pm-12am – Bed! And yes, I usually go to bed and lie there on my phone for at least another hour before I fall asleep.

Don’t we all though? Lastly, how do you achieve a good work/life balance?
Work/Life balance – ha! What’s that? When you run your own business I don’t think it REALLY exists. When I’m on I am ON, but I don’t have any trouble taking the odd day off or going on a holiday when we need it. I’ve always been an all or nothing kinda gal.