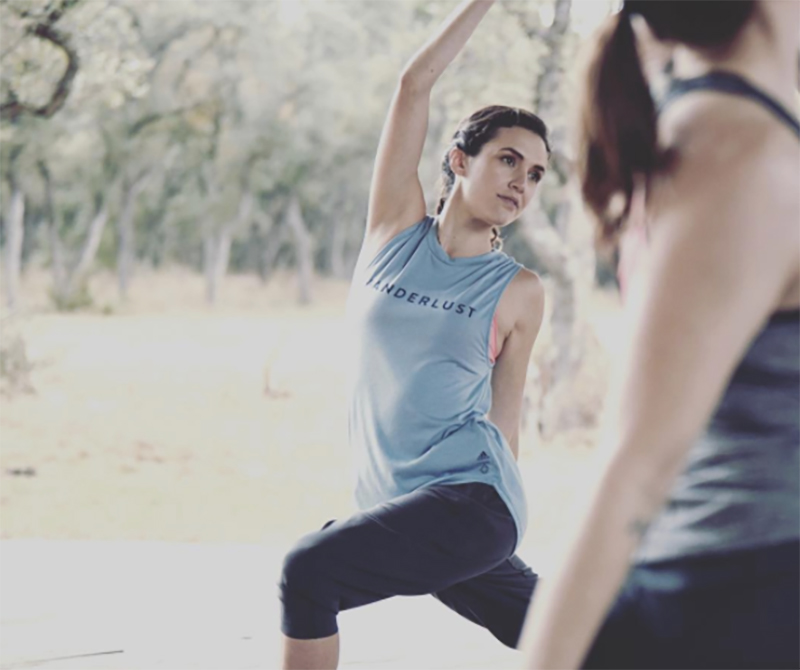 The Dangers of Fake Beauty Products

|If you’re a Yogi, whether it’s vinyasa or hot yoga that rocks your boat, you are sure to know these people.

I’ve been an on-again-off-again-but-still-awful-‘yogi’ for years. So, it’s safe to say, I’ve accumulated some knowledge along the way and noticed a few patterns in the other people who turn up to these things. The type of people who go to Yoga classes are people you just wouldn’t meet anywhere else. Seriously, you couldn’t make this stuff up. Don’t say I didn’t warn you.

Here is a handy list of my all time favourites.

1. The over 60+ woman that can bend in ways that nobody should be able to

€¦and she puts you to shame. While you’re trying to touch your toes but can’t make it past your knees, this gal has already touched her toes and painted her toe nails and is on the way to doing a full sun salutation. Your bones are cracking just from putting the yoga mat down and she’s already doing her own warm up. This absolute babe has the ultimate flexibility and also has a tendency to shout the ‘OMM’ mantra thing at the top of her lungs. Which, I mean, we should do… but no one else does. Again, making everyone else look bad. Cheers lady. 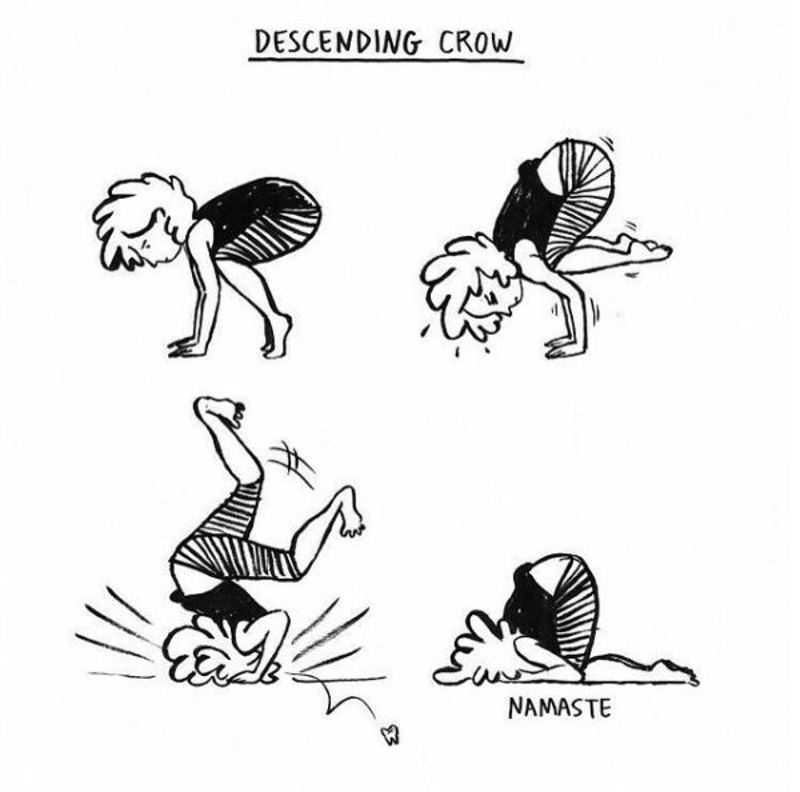 This person usually lingers around and chews the ear off the instructor waaayy after the class has finished. It’s like they’re trying to get an autograph or a gold star or something. Kinda like that person who knowingly tries to get the last clap of an applause, ya know? 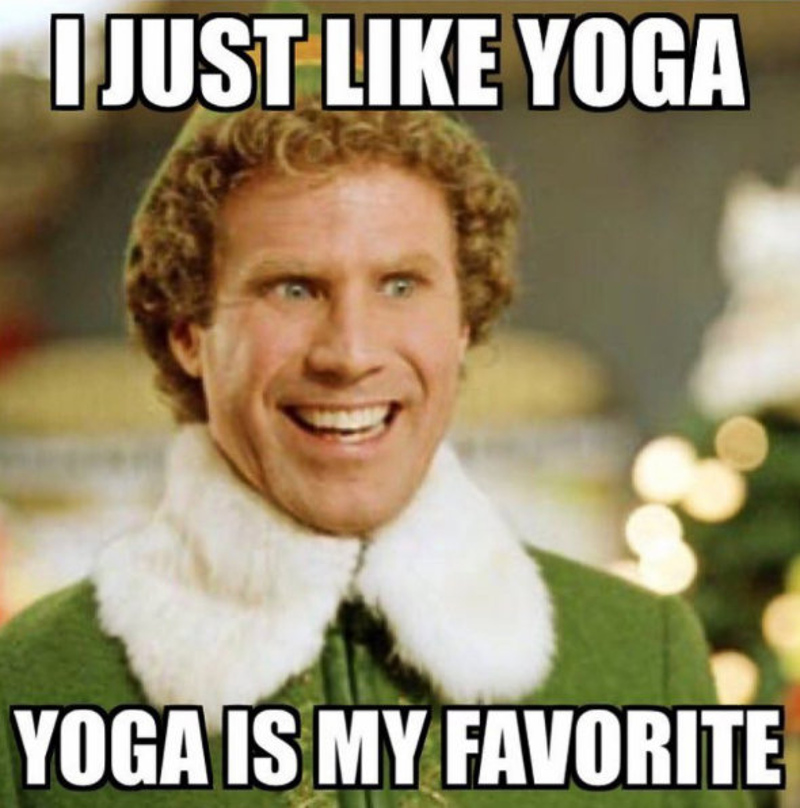 I’ve been to more than my fair share of yoga classes and there is only ever one man in attendance. He is a lone wolf. A solitary man. Also usually amazingly bald (seriously, how does he get that close a shave?) He usually knows other things like tai chi and is a black belt in karate – could most definitely kick some serious ass. 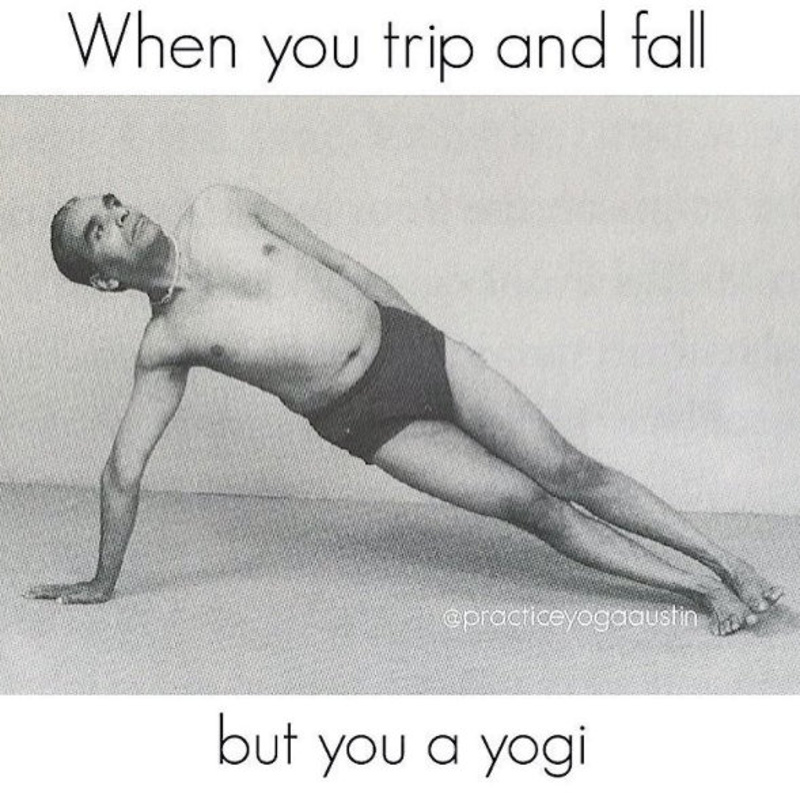 There’s not really any delicate way to put this€¦ with every movement, comes flatulence, basically. Not even the subtle but deadly kind – the impossibly loud and still deadly kind. I have a tendency to shudder with extreme second hand embarrassment so this really puts me off my game. It’s an unspoken rule to just let it happen and not be repulsed, though, so that’s nice. You let those bowels be free, gurl. No judgement here! 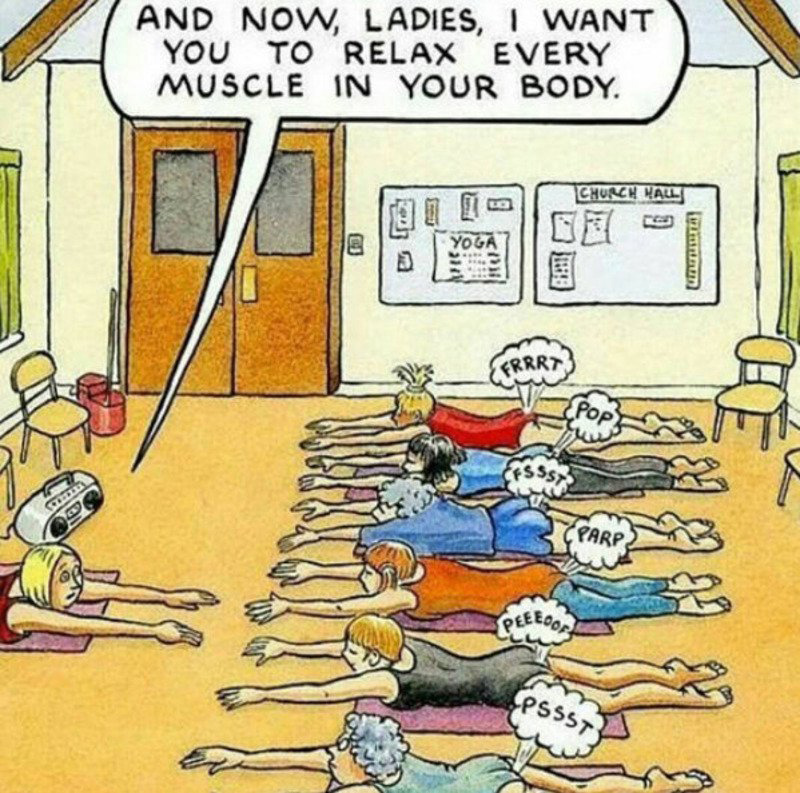 Told this person to do a stretch to the left? They’re going right. Want them to do the downward dog? They’ll do jumping jacks… for some reason. Absolutely no spacial awareness what so ever – sure, elbow me in the face some more. It’s my favourite. You know that game you’d play as a kid where everything meant the opposite for the day? It’s exactly like that. All the time. Every class. 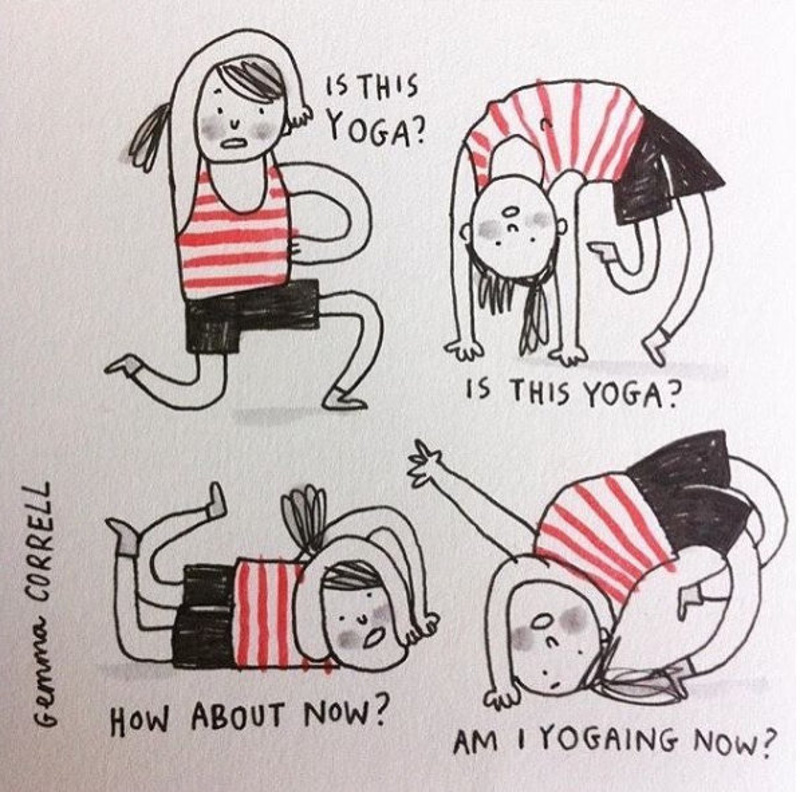 6. Would win Miss Yoga every damn class – if that existed

This girl has the best yoga mat, the most coordinated outfit and puts effort into every detail down to her special grip yoga socks. Her hair always looks flawless and somehow she never breaks a sweat€¦ So basically she makes you look like a drowned rat that had to burrow through a bush to get here with no fashion sense to speak of. Cool.

7. The one who ‘isn’t even supposed to be here’

There is always, always that one person who comes to the class by ‘accident’ because they thought it was a different class or they were meant to be somewhere else but will stay anyway – and make it known to everyone, multiple times. They complain about literally everything, give the instructor a hard time and just generally kicks everyone’s zen in the face. Basically may as well take a huge dump on our yoga mats. Why don’t they just leave, you ask? Who knows. A mystery. 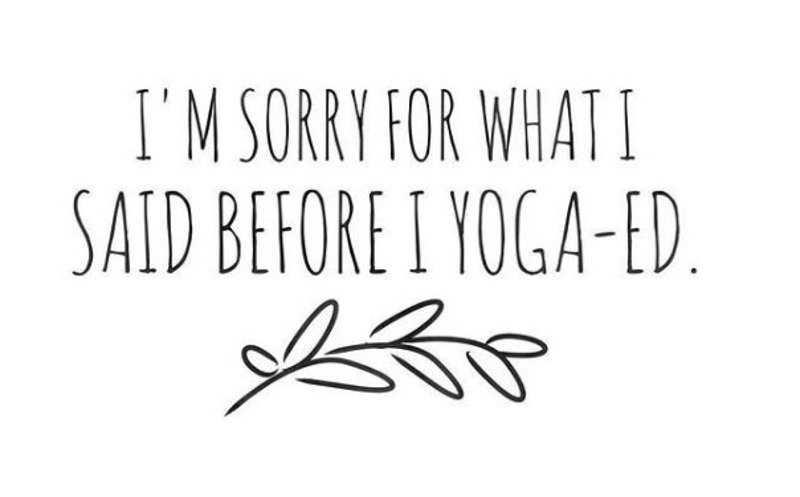 What They Didn’t Teach You In Sex Ed – Gender

8. The kind of useless pair of friends (usually me)

I’m usually one half of that annoying pair who snickers with her friend throughout, from falling over, someone else farting and finding a hole in the crotch of my new leggings every class (seriously, what do they make these out of now? Bin liners?) Just generally look like we’re here for a good time. If one of us does something wrong, you can bet the other one will mess up too. It’s weird and never in a beautifully synchronised way, either. I apologise on behalf of all of us insufferable twosomes. 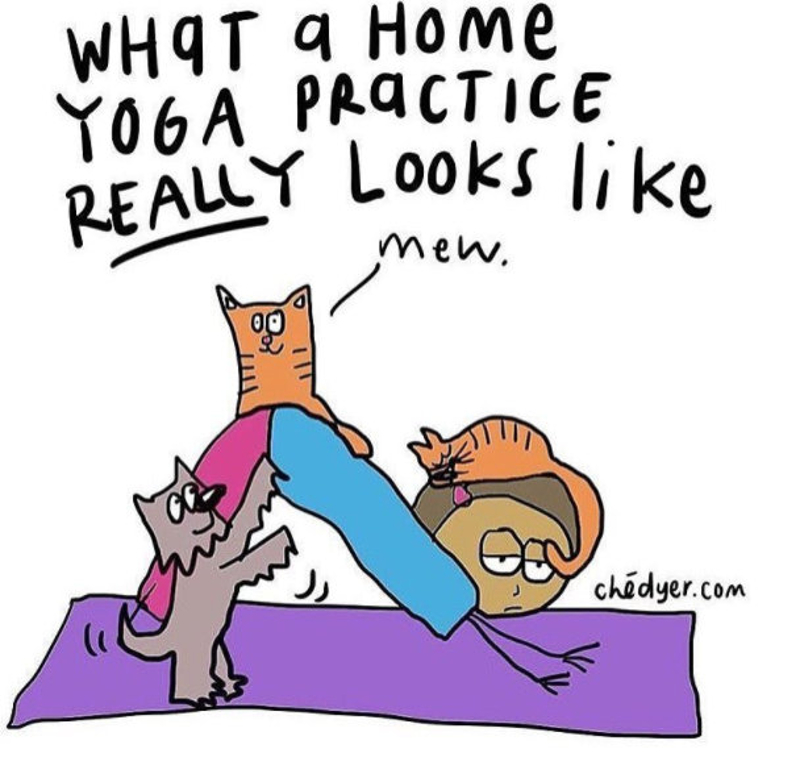 9. The one who does yoga like it’s her job

Most likely an undercover FBI agent. This person never cracks. All poses are spot on, she never complains about the temperature, never cracks a smile, never laughs at the instructors jokes€¦ and is always the first one out of the door. Seriously, by the time she’s all packed up and left the building, I’m still trying to stick my yoga mat inside the unnecessarily small bag and tie my shoe laces. It’s inhuman! Only cracks a smile right at the very end and the whole room has a collective sigh of relief, mentally. Yoga equivalent to the queens guard. 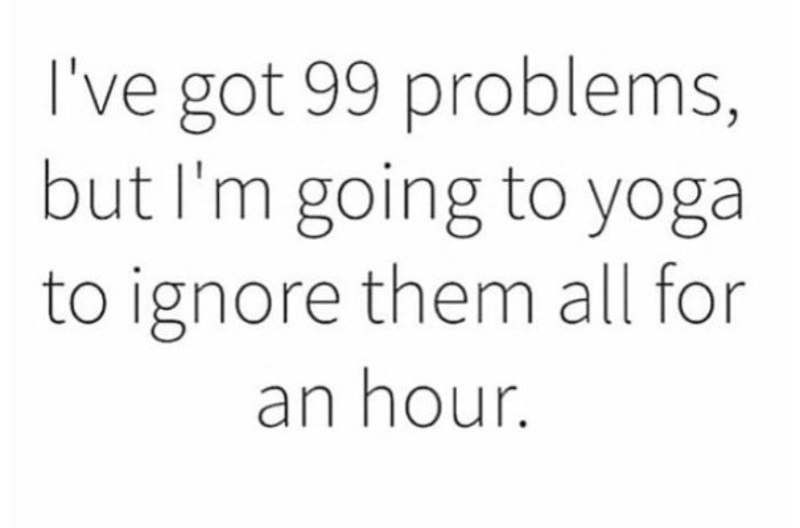 This gal knows how to let loose! She lives for yoga and you can literally see her troubles melt away when she starts the routines. This lady is experienced and knows the name of literally every yoga movement and could probably spell and do them backwards on demand, too. Also is usually suuuper nice and doesn’t pass judgement when you’re flailing around like a fool. A true yogi zen kween. 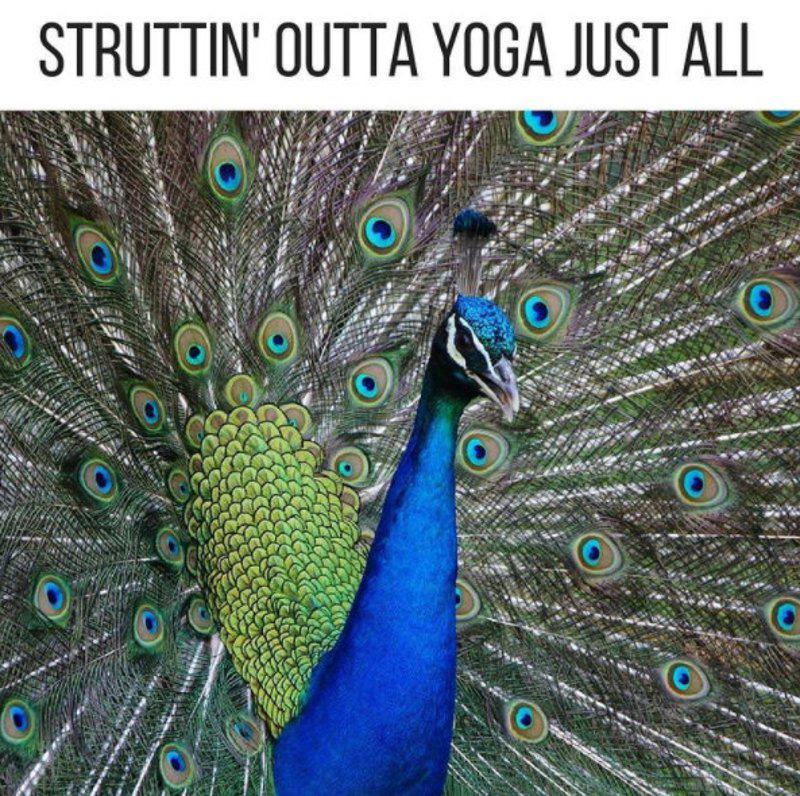