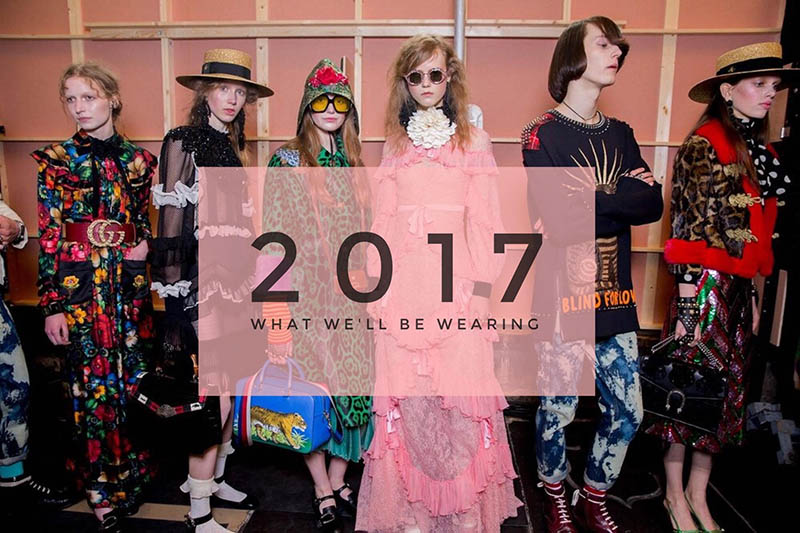 | Don’t miss out on the biggest clothing trends that we’re predicting will be huge in 2017. Our crystal ball doesn’t get it wrong.

It’s the first week of 2017 and if my sale shopping could tell me anything, it would be I’m already seeing some serious fashion changes a’coming. 2016 certainly left its stamp, but maybe not for the right reasons. With tragedies hitting the world over from Brexit to Bowie, it has been a trying time for us all, but when it comes to our wardrobes it was all about giving things a go – even if you experienced it first time around!

The past year saw many trends come and go, dipping our fluffy sliders into many an era from disco to dynasty. But there was one decade that truly embodied 2016 and that was, of course, the nineties. Yup, the impossible really happened and somehow, the era that thought butterfly glitter clips were a thing, was suddenly chic! I’m afraid to say, that the nineties won’t fade in the next year and we’ll delve even deeper into reinventing another time style forgot, the eighties. I’m really sorry to say that all those off the shoulder tops will have to be packed away until next time around as our 90’s classics will be paired with some very, bold shoulders – amongst other things! Here’s the 10 stand out trends you should keep in mind when hitting dem sales.

Oh yeah, 2017 you’ll see stripes alright! Pretty much making the cut in most shows this season but this year its the bigger, the brighter, the bolder, the better! Another heads up? It’s all about the knit dress.

Wear Colour – Because 2017 is about getting out of the comfort zone, and retiring black to the back of the wardroes! I mean, nothing against those trusty neutrals, but who can resist the mood-boosting effects of a rainbow bright? Wear H2T colour block, mix and match or get all up in those colourful prints, after all with colour you can’t go wrong.

I know I just said WEAR ALL THE COLOUR but the real colour of 2017 is pink. No matter what Pantone says, the SS17 runway proves it. Embrace that girly girl.

From the whimsy to the political, we’ll be wearing our hearts on our chests, handbags and even shoes this year.

2016 has officially been the year sportswear made it into everyday wear. Pretty much all thanks to Vetements, Sports Luxe is here to stay at least for another season.

The unsung, not-not-done-to-death ’90s trend? Iridescence. For spring, it gets an update in pinks blues and greens. Done in sultry sequins and sheers and a dash of chain mail, it’s the 2017 way shine.

Shirting is still everywhere. I mean, how many ways can you wear a button-down? Turns out there’s still more to see here, so yes, you can keep all those backward, deconstructed Zara tops you collected over 2016.

Suiting up this NYE

Watch out as fashion falls back in love again with some romantic style bows. Tailored with all the ruffles and lace, we are showing our softer side with bows on everything. From heads to wrists to our feet, the’ll be wrapped accordingly.

Shoulders, baring them is oh very 2016 dahling, 2017 is giving us architectural realness all the way. Put some structure in your sleeves and turn the volume up to 11, the eighties are back baby and they are chicer than ever.

Ah the ruffle, thank you for coming into our lives the last year. In 2017, every flounce counts for spring. Whether light and frothy or structured and sculptural, ruffles are here to stay. (Thank Gawd)